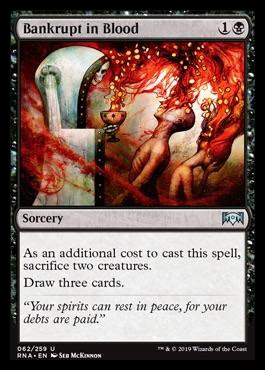 This is unplayable in a general sense. There is no real way to get two bodies to sac on the cheap, your best case is probably two mana and a card of cost. You will be able to tilt the balance on that a bit to more like 4 mana and no cards and so forth but however the balance winds up the end result is not looking efficient with Bankrupt in Blood. It is going to be a four mana Divination or a six mana Concentrate at best. This also fails to consider the times this is dead because you don't have dorks to play or when it loses you the game because it gets countered. So why have I given this a three if it has a range from inefficient to game losing? Basically I feel like there are going to be abuses for this. They will all be in build around decks but this has some good application in those. When you actively want to get shot of your dorks this is a lovely cheap way of doing so with fantastic returns. Cards like Veteran Explorer spring to mind. There is also the potential to combine this with cards that cast it for free but that feels a little more tenuous with Bankrupt likely being dead in such lists otherwise. The art is however exquisite. 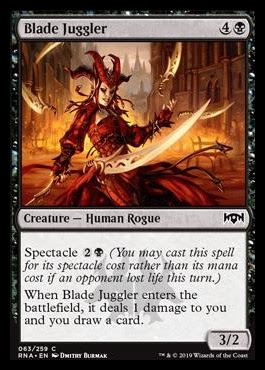 This is worse than Phyrexian Rager, the power is nice but it isn't worth not being able to play this on turn three sometimes. Cheap card draw dorks like Rager are there to pad out your curve, they are basically support cards aimed at increasing your decks consistency. As such you need them to be reliable and this isn't. 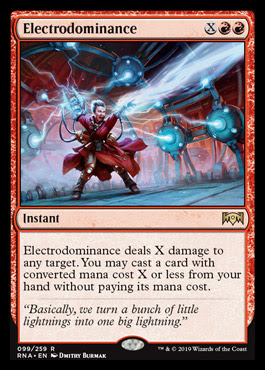 I liked this a lot at first. I got all excited about Ancestral Visions and even living End. Then I remembered how badly the Expertise cycle in Kaladesh flopped in cube and I rather went off it. Sure, this has a nice high ceiling from abuse with suspend cards to big swings in the mid to late game. I like the idea of burning something for four at end of turn and playing a Restoration Angel or similar. In reality it is all just wishful thinking. The times you get to efficiently use these kinds of cards are greatly outweighed by the times that you just have a bad Fireball. On top of that X burn spells are not great in cube. Things are just a bit too fast for them and there are better things you can play for scaling with mana or late game effectiveness. I think this will get dabbled with, it might even replace As Foretold in some modern Living End builds but in the singleton formats I don't think this has the redundancy to be effective even in the build around lists. The card itself isn't a total dud and does do things without strong support and so experimentation with it won't be a total disaster ever. A card to watch but one that seems a little bit of a trap at present. 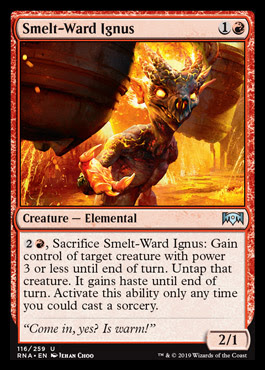 Cute card. It is nice and cheap and has a useful ability but overall the cost is high and the card is low powered. Play a good two drop or play a good Threaten. This does nothing well and that makes it pretty unplayable for the type of card it is. Back in the day when cards like Hearth Kami and Torch Fiend were still nice little utility cards this had a shot but in the current game where we can get utility on cards with the power of Abrade this little Ingus is a non starter. 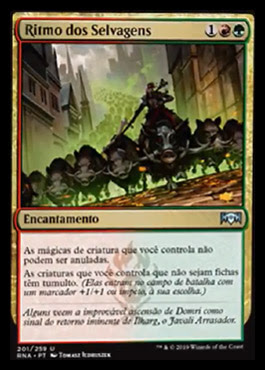 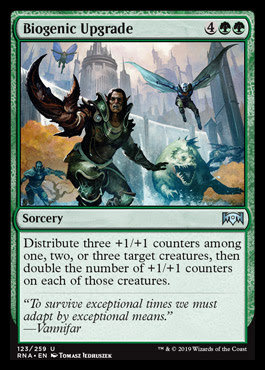 I like this a lot but then I just think I like all the riot cards. I don't think this is all that playable sadly. Three mana is just a bit late in the day for a haste giver. What I do really like about this is that it doesn't preclude playing dorks with haste. In a deck with cards like Fires of Yavimaya you don't want to play things like Glorybringer because you are getting poor returns on your Fires. Savage's Rhythm compensates you nicely for this. Hopefully riot stacks so this doesn't preclude other riot cards like Fires does for other haste dorks but far from a disaster if not. Uncounterable is a nice perk too. It means they will need to counter your do nothing card rather than the subsequent threat cards. I don't normally like uncounterable all that much as an ability but it is really good here. The kind of decks that want haste givers tend to have big slow threats that are easy prey to countermagic. I will absolutely try this out but I fear it is just a bit too slow and fair for cube, even tailor built decks. You can get haste on Lightning Greaves for a mana less or Mass Hysteria and Concordant Crossroads for two less if you are brave!

Six mana buff card? Sorcery? This is almost never going to be better than Bounty of Might and that really didn't do well in cube. A bad version of a bad card. We could talk about scaling potential but really? For this? Why bother when you can use one mana cards like Hardened Scales for your +1/+1 counter synergy needs. 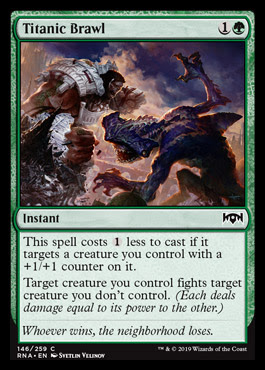 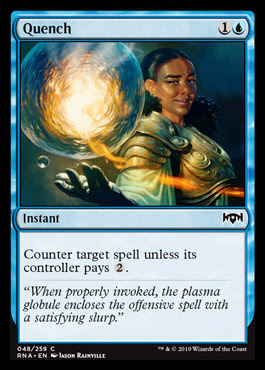 I have some real hope for this. Prey Upon has seemed increasingly playable in cube. Green tends to have dorks in play and they tend to be a bit bigger than other colours stuff. The things you want to kill in the colours that lack removal are typically the small utility creatures like Grim Lavamancer. For those the fight cards are fine. They are not the most effective or the most reliable but they are cheap and they get the job done. Titanic Brawl seems enough better than Prey Upon to actually make that leap into mainstream cube play. There are loads of creatures and effects that put counters on things and many of them are green. This gives Brawl a reasonable chance of being an instant speed Prey Upon which sounds nice. Instant really lets you minimize the risks associated with fight based removal. At worst Titan Brawl is Pounce. It is comparable to Ancient Animus in power level but cost reduction is invariably the best thing even if +1/+1 counters scale with fighting. Brawl just feels fairly well placed for what it is trying to do. It can be just better than Prey Upon and it can't be worse than Pounce. It is fairly safe and on average has good tempo. Even if it is the best (mono coloured) fight card on paper it is still not a lock in for cube by a long shot and has much to prove. 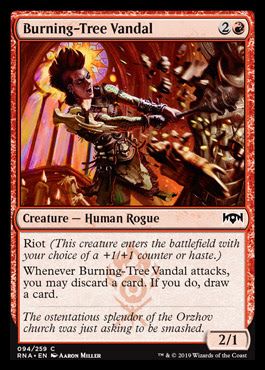 A year or so ago I would have stuck this right in the cube. Red things that offer ongoing loots didn't really exist in any playable guise until recently. Now we have a selection of reasonably interesting ones that are of acceptable power level. As such I am not sure of the chances Vandal has in cube. A 2/1 isn't hard to stop or at all costly in most cases. I think the average loots you will get from Vandal is pretty near one. The riot will give you the option of looting quicker or getting to trade for a better dork or removal effect. It probably isn't increasing the number of loots you will get that often. For the most part I expect this to trade in combat and so is it worth 3 mana to get a loot and trade with a 2/1? No in short, that is a terrible deal. If you can somehow keep on top of the game and burn away anything they get into play then Vandal will do some face damage and get some ongoing loots but that makes it sounds good when really that should still make it bad. Compare 6 face damage and 3 loots to what a Warboss or Rabblemaster will get done in that time. This will be outstanding in booster draft and sealed, it should be one of the premium non removal commons but it isn't quite there for cube. It needed to be a 1R 1/1 for cube I think but then it would have been nearly Looter il-Kor levels of good. I will try this out, I love riot and I love looting effects so I do want this to outperform expectations but it is going to have to outperform them quite significantly. I am not even sure this is suitable enough to see play in a constructed deck themed around discard and/or creatures somehow. I think I would play Vaultbreaker over this in any case that comes to mind. 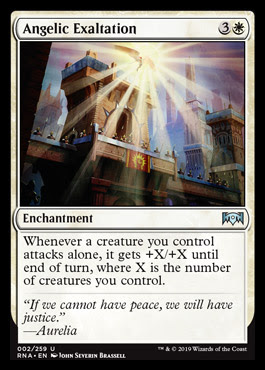 A Sublime Archangel without the body. That might sound awful but it is not as bad as it sounds. Sublime is obviously a much better threat and tempo play. It is also of a much higher power level. If however you are just about the effect then this is a consideration. Enchantments are just harder to remove and so you are more consistently going to get the desired effect. There are some decks where this kind of a buff is superior to Glorious Anthem's. Basically those are weenie decks that have a selection of powerful scaling creatures. Some evasion, some lifelink and that sort of thing. You get more in the way of returns buffing those as well as more potential choice as to how you wish to use your buffs. Broadly speaking I think it is too narrow, too pricey and too situational to cut it in the cube but it certainly isn't a total dud. It can win games and it can outclass strong cards like Anthem at their own game. 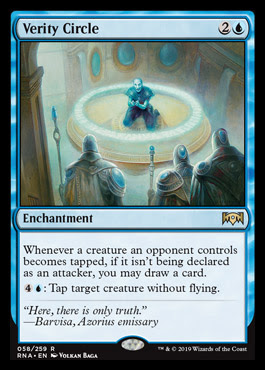 This card starts from a bad place. It relies on your opponent having creatures, ideally ones that tap for their effects such as mana dorks and looters. If they just have attacking creatures this is poor and if they just have the odd wall and token generated by a planeswalker then this is shocking. As a board control tool this is shocking, play Flood or Icy Manipulator, or you know, good cards like Wrath. As a card draw tool this is unreliable, deeply situational and thus also shocking. Being both at once is of little help even with the self synergy the card has. It is just far too conditional and expensive.