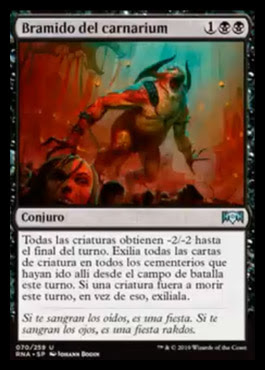 Well this is basically just Flaying Tendrils without devoid and for cube at least I am not sure that devoid has much relevance on this type of black card. Bellow also has some mild retroactive graveyard exiling effects for the turn but I am failing to see why that is all that much of a plus. I am sure there is a good design reason it has been done that way. It would need to be instant to be much use in that regard as far as I can work out. This is all rather by the by as Infest effects are not very impressive in cube play and see little to no action. 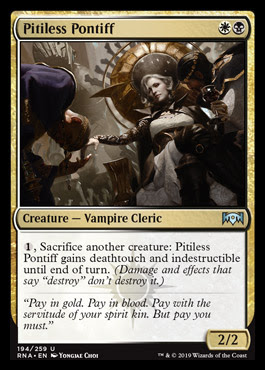 As a sac outlet this is weak as it costs mana to use and has no stacking returns. As an aggressive dork it is a bit low threat to be that big of a deal. It can be ignored more than you want a card like this to be. Defensively it is more annoying as it blocks, kills and survives against a lot assuming you have dudes to feed it and a mana to do so with. Decks that are looking to be defensive don't often have spare dudes to just throw away so I am not overly impressed with Pontiff in that capacity. I think the best chance this has is in cleric or vampire tribal decks where its reasonable baseline power level, low cost and smattering of utility will carry it. 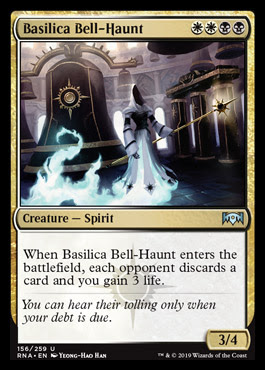 I do not like this. Certainly it is quite powerful but it is onerous to play and far too far up the curve for the kinds of thing it does. Four drops want to be dangerous, they want to have a big impact on the game and this is just a mild value card. Life is nice but it is worth very little when considering the cost of a card. Especially just 3 life, that isn't changing much against the majority of situations. Card discard is fine but loses value the more the cost of the card or effect it is on. It is also a single discard of opponents choice making it easy to play around and pretty low value. It is significantly less value than draw a card would be for example. Compared to Crackling Drake this is a laughable card. It has no keywords to make the 3/4 that relevant of a body. It has no scaling potential and serves no real purpose. I cannot imagine ever playing this. I am not sure I would be all that excited if the card cost 2BW instead. 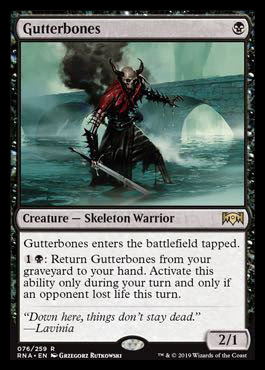 Yet another recursive black 2/1 for one. While this sits at the lower end of that range of those cards it is still a pretty big addition to black. None of that group are bad cards and having that increased redundancy is ideal. Black also still lags behind other colours for playable one drop dorks. Gutterbnes is low end because it costs 3 to recur and has limited creature type synergies. It feels like it might also be harder to fulfill the condition when you want to recur it unlike Dread Wanderer. That being said, it does return to hand rather than play so it can be used to empower discard cards and costs like Collective Brutality and Faithless Looting. Gutterbones can also block (eventually) which makes it more appealing than Bloodsoaked Champion outside of the really aggressive decks. Black is fast approaching a critical mass of high quality one drop dorks. The return of Bad Moon builds are on the horizon! Warrior is not an irrelevant tag either with a number of decent synergy cards working well with then. Just nice to see more cards like this getting made as well. 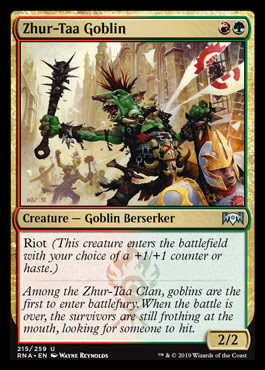 This is significantly better than either Watch Wolf or Rip-Clan Crasher and not because it has a better creature type either. It is simply that the option on either of those modes is ideal. I love riot for giving aggressive threats some options. Even turn two on an empty board there is a relevant choice to be made with the riot. Great and direct though this may be it simply isn't pushed enough to make the cut in cube. There are enough other more potent two drops in these colours now that this shouldn't get a look in. A single extra stat or keyword would probably have been enough to propel this to the top of the pile but that is the brutal existence of the pure aggressive dork. Once you are outclassed you are basically unplayable. I have culled so many two mana 3 power dorks from my cube over the years for this reason. This is better than most but not quite enough to count. 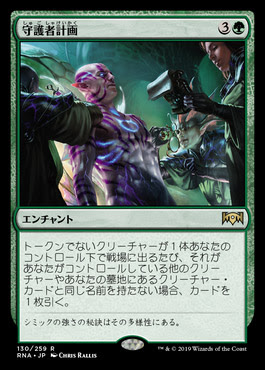 A rare example of a card that is better in singleton than other formats! This certainly has potential although I am not exactly sure how or where as yet. Certainly you can run it in most of the decks that Beast Whisperer is good in and it will be similarly nuts. It will be a lot better against removal and worse against countermagic. Enchantments are harder to deal with than 2/3s but countermagic on subsequent dorks will deny card drawing unlike Whisperer. It will also be worse in the sense you can't so easily find it and recur it but that is not a problem when you are running it as redundancy for the Whisperer. I think this will be too narrow and clunky to be worth it in the drafting cube but I am not at all sure on that one. It is a lot of card advantage and with cards like Outpost Siege and Experimental Frenzy doing some reasonable work I can see this surprising me. In constructed decks built around this we can expect to see some increased need of library reshuffle effects! I can see this also being more appealing outside of the mono green elfball style of deck as well. I like the idea of all my Savannah Lions or even more juicy, all my Gravecrawlers drawing me cards! This is a very splashable card. 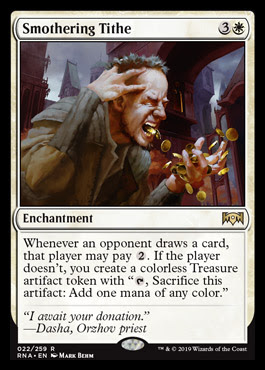 This will make a whole lot of treasure. Paying 2 to prevent the treasure is not going to happen until pretty late in the game. It is never an efficient thing to do, paying two to deny one is pretty simple math so you have to be well ahead or otherwise wasting that mana for it to be a good thing to do. So how good is getting a treasure whenever your opponents draw? It is mentally good in multiplayer formats that is for sure! In cube however where things are a bit quicker and more direct I am concerned about a four mana do nothing and I am concerned about a mana producing card at 4 mana. A white aggro deck certainly doesn't want that and I can't see a control deck having the time or resources spare to invest in such a luxury. I can only see this being part of some heavy synergy or combo strategy like Stasis. Forced draw is really where you need to be for this to work out. Tithe plus a card like Wheel of Fortune is going to Time Spiral levels of abusive. Tithe makes Trade Secrets start to look quite interesting too! This is very much a card I plan to brew with, it looks like a lot of fun and like it can do some really powerful things. Sadly I expect most of those things will culminate in some storm style win and thus feel like a bunch of old classics. 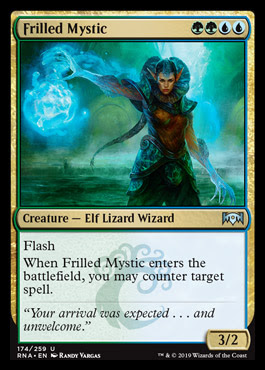 Well this isn't even really power creep. That extra power is almost less interesting than the elf type. The double green in the cost is quite possibly more relevant than either and is a drawback! Not that it matters all that much as Mystic Snake sees basically no play these days. The card is simply not one that has aged well. The only reason to play it is to have a counterspell on creature for tutoring and recursion abuses. You could soft lock people with Snake and bounce but even that was dodgy when Snake was good. It is easily killed and disrupted and is just super slow. A four mana counterspell really isn't great protection with so many great and dangerous cards costing less. I don't expect the redundancy in having two Mystic Snakes will improve the decks trying to abuse them anywhere near enough for them to be relevant. I will try of course, it has been a while! Dust off the old Crystal Shards... 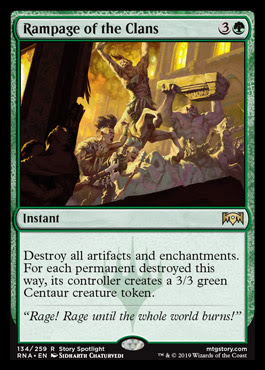 Rampage of the Clans 4

This is a terrible Shatterstorm or Tranquility but that isn't what this card is designed to do. If you are using this to deal with stuff your opponent has you are doing it wrong. The plan for this card is to power out a bunch of cheap cantripping or other value proffering artifacts and enchantments and then blow them all up at EoT with this and create a vast army in the process. That sounds quite easy to build and setup and quite powerful. It somehow reminds me a bit of how Paradoxical Outcome decks are built in cube even though they will finish things off very differently. You can kill with this on turn four fairly easily and you can have a bunch of leftover gas if it fails as well. Only viable as a build around card but it is a kind of whole new archetype and it seems to be decently strong. I don't know why I think making a new archetype is something that makes it better, it might make it more exciting but it certainly has no bearing on the power! I look forward to brewing with it anyway.