Finally I have included a guide to the rating. I have tried several times to detail it accurately and never quite been satisfied. The attempt always gets very wordy very fast and so I have done the opposite and tried to capture the essence of the ratings as briefly as possible. These are mostly just a pointer to help frame the written reviews.

This is a versatile creature for sure. A 3/2 deathtouch is a solid body that applies pressure and trades effectively. It is below par in cube but it is certainly not bad or dead. Equally just paying three mana to black style Divination isn't impressive but it is fine generally and situationally just the ticket. Dork or draw is a nice modal start. This card has two comparable floors that are distinct, impressively high utility and power considering, and are both broadly useful things to be doing. Double not dead card. You can even two someone to the face with this which is surprisingly handy, I have "burnt" a lot of people out with Wretched Confluence! Then we have the ceiling which is getting the body and the cards at the cost of something minor like a goat token or a Grave Crawler. Then we have a very good card indeed. While that is good it unlikely without imposing narrowness on build. Equally I think you need to have some chance on the ceiling to make the card enticing. A low power middle of the road modal card is fine filler but it isn't important or exciting. Supreme Will is that sort of card. Good floors and diversity but hard to ever be that impressive. A stop gap for balancing the cube until a more impressive card to comes along to replace it. Fell Stinger will be fine at worst and has a good shot of being actually good. Certainly one I will give a good long test. 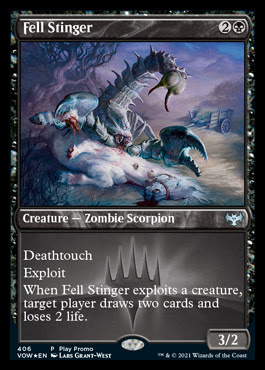 Cool design. This is a Wrath that gives you an edge if you have more creatures than your opponent. You can use it as a Wrath in control decks and there it is basically a 5 mana Wrath that gets around indestructible cards. You can also use it in token and weenie decks and have a powerful tool to control the board. Sadly I think this misses the mark on both fronts due to cost. At four this would be an impressive tool for white along the lines of Extinction Event or Settle the Wreckage. At five I am not sure control or aggressive decks will be keen enough. Worth a test as this is a lop sided mass removal card that can be played in more archetypes than conventional Wraths. Mass removal tools you can play in decks other than control decks are some of the hottest cube pickups and have an impressive effect on win rate. As such this cannot be ignored so despite my low-ish rating I am not fully convinced this wont turn out to be a bit of a staple. 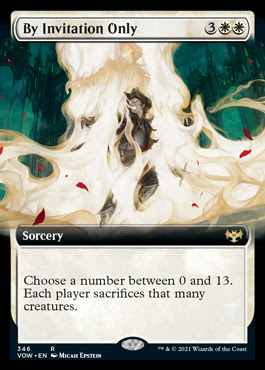 An interesting card for sure. A three mana Demonic Tutor effect is fine, that would see play in some builds, although mostly combo ones. Exiling 13 cards is more than significant however. That will typically be half the library if played on curve. Later on it could be all of it! As such I would likely only use this in a combo list dripping in redundancy or a combo deck trying to win with things like Thassa's Oracle. 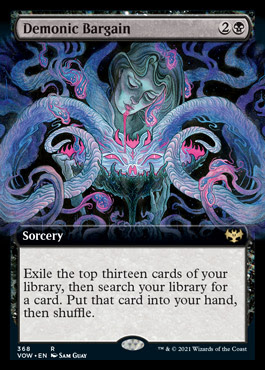 This is fairly powerful (even if you only ever make one blood with it) and playable but not quite there thanks to being gold and having to compete with the frankly mental power of four drops and what they do for a game. It just does a bit too little immediately with a bit too high of a cost of doing more there after. This reminds me of Reaper of the Wilds in style and it probably isn't that much better in terms of power. In a tribal vampire build with a blood mechanical theme however Anje might be your best card! In a tribal vampire madness or aristocrat deck Anje does some nice supporting work but in a tribal deck without any of those specific synergies Anje is looking unimpressive. 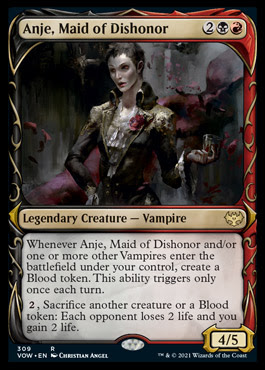 Cute card but risky and low tempo for just a value reward. Probably only playable if you can attack with a frog or mill the turn you play it, and ideally play a land with it immediately. 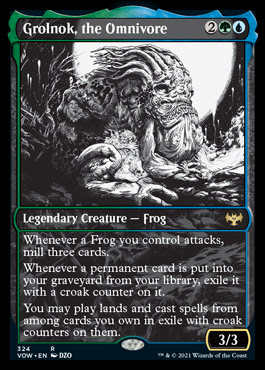 I think this is too much stuff to not be good. I had my concerns given how slow the card is to deliver the full yield and how much you want to play this in a deck that can apply pressure. You can't really think of this as a Glorious Anthem as it is so slow in becoming that. Certainly that is a big part of the power of the card but it will not play out like Anthems. They are typically used as a high tempo play that enables immediate surprise burst damage and combat superiority. The three turns wait on this gives a lot of preparation time for the opponent and will not allow for optimal timing. Even so, a late and revealed Anthem is still a great thing to have. It is hard to say what it is worth exactly in cards or mana terms but it is certainly good and relevant. The other aspect of this card make it feel like it is totally free! Three cards or three 1/1 dorks or a combination there of are worth three mana. The card overall has a very planeswalker feel, three Knight-Errant +1s (or Jace Beleren -1s) and then an Ally of Zendikar -4 over three turns instead of 4, and for three mana with no risk of being attacked to death before you get to "ultimate" with it. It is worth noting that in an aggressive white deck drawing a card is better than a 1/1 token by a greater margin if you are already able to attack with two or more dorks. Making 1/1 tokens could be better than drawing a card if you are not able to attack. Obviously a card is worth more than a 1/1 token in general but it is less tempo and does scale well with equipment and other buffs commonly found in white aggressive lists. Essentially this effect will tend towards doing a thing most appropriate for your game state. The other comparison is to History of Benalia which is faster acting and higher tempo but ultimately only makes a pair of 2/2 dorks rather than upto three and it fails to offer up the ongoing buff to other dorks. So yeah, this compares really well to plenty of other solid cube worthy cards. Yes this is a bit slow and not all that well suited to slower more controlling or creature light decks but it is still an incredibly packed full of power card. 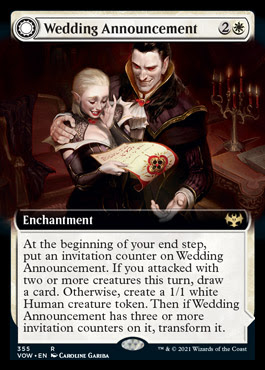 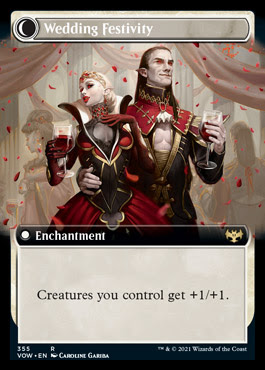 This will mostly just steal one drops in limited and that isn't good enough. Really you need sac outlets and at least some other vampires in the deck. Likely a tribal card and likely only one you play when you are also packing sac outlets. Good ceiling but needy and overly situational. 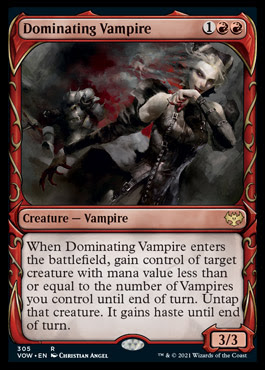 I am only playing this if I can reasonably expect it to cost 1 mana and that leaves as a very narrow card indeed! The existence of things like Spirit of the Labyrinth and other cards with both types at once give this a bit more chance to hit this ceiling. Good when it is suitable but pretty far end of the spectrum narrow on that suitability. 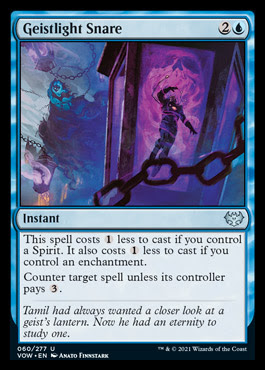 Chainwhirler meets Glorybringer. This card is a bit of a house. Menace is weaker than flying but not by miles when you are flinging damage around the place. I think this will ultimately end up replacing Thundermaw Hellkite in cubes. It is simply a bit more rounded and threatening to leave it play. It is good enough for cube just on the front side but the flip side gets seriously scary. This is fast acting, high threat, high tempo, value, and disruption all packaged in a convenient and self contained package. Other red cards like this are top tier and win a lot of games and as such I cannot see this failing to do good work in cubes. 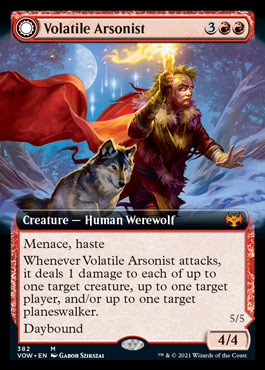 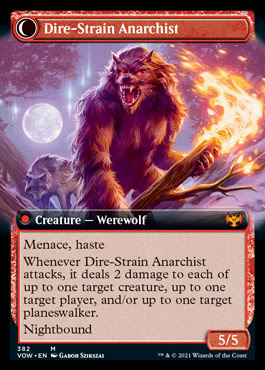 Cute card but very niche. Likely only something you can play in some sort of going off deck where you can fork it or cast it alongside other many other looting effects and rituals on a big turn. Even if used with something like Burning Inquiry you only wind up a single card up so you really need quite a lot of discard before this is interesting card draw. Certainly a potent effect with plenty of scope to scale but unlikely to be able to squeeze into many lists. 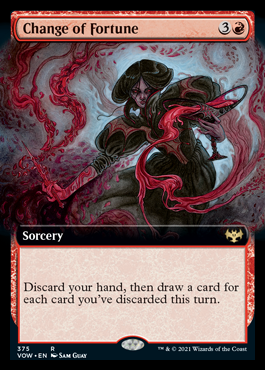 A nice instant speed Pyroclasm for tribal vampire lists with a bit of slapped on utility. Instant too, making this fairly appealing. The advent of blood tokens makes it so that you can afford more polar cards such as mass removal effects in vampire builds which further increases this cards chances. 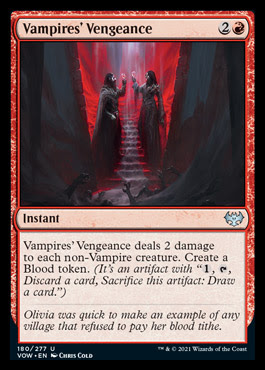