When you absolutely positively need every single creature you control to be Ragavan, accept no substitute... (but do also throw in Curse of Opulence as well..) This is quite a big investment for potential card advantage. You need to have creature that will deal damage and that can be hard to do when playing three mana do nothing enchantments. This is very unlikely to give value the turn you make it and can be undesirable value even when it is triggering. You need the mana to cast whatever you flip as well as have it be a better thing to do that alternative lines. Trample is a great thing to get as a bonus but I don't see it being enough. Cards like this are just a little too needy and unreliable. Value can be attained more reliably and so it is and will be. 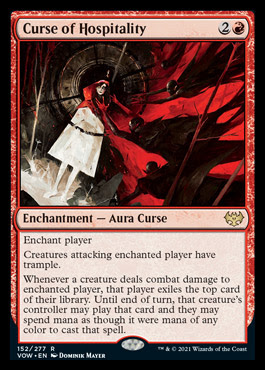 Perhaps some Fecundity esque combo here. A bit slow and unreliable to just run in a tribal human deck. 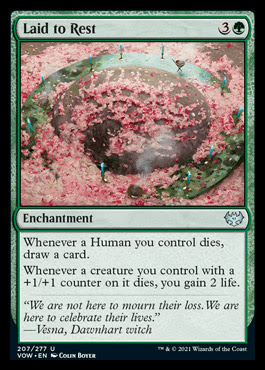 A lovely card quality, advantage, and yard filling effect. This is close enough in power to the other premium four mana card draw spells that when you have bin things going on and can afford a raw draw spell this is likely the go to. The total control this offers means it should edge out Fact or Fiction for good and may even eat into the turf of Gifts Ungiven. The extra value on Memory Deluge or the ease of play on Behold the Multiverse mean that I cannot see this breaking into many cubes without strong synergy payoffs. 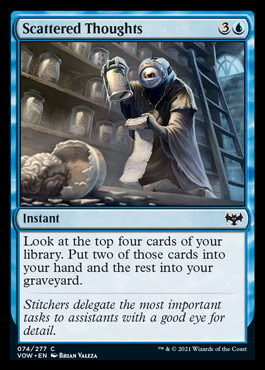 Nature's Spiral meets Divination. Two pretty limp cards. Cheap recursion just isn't good, it is unreliable and poor tempo. You might as well play more powerful recursion as you want to use it later in the game. This is not a card that can reliably help you get setup and so despite having the look of doing potent things it is not very playable. 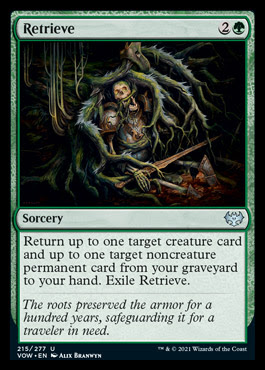 Scarab God, God-Pharaoh's Gift, Whip of Erebos, and Mimic Vat all spring to mind. All quite powerful cards that have had impacts on cube and standard alike in their time. Dollhouse certainly packs a punch. It will dominate a game pretty fast and afford a lot of options, tempo and value on the way to doing so. All you need are some dorks in the bin. There in lies the problem, there is just a little bit too much graveyard disruption these days and so the threat of this is unreliable. I want a card that works by itself if I am paying 5(6) mana to play it. I like this, it looks fun and has good synergy and a good average power level and ceiling. It just lacks that reliability meaning I am going to play alternatives. The thing that might keep this card in the cube is if you have Urza, his Saga, and some other construct and artifact themed cards in your build. They work nicely with this. As I do run such things I will test this out and find out if this can scrape in on some bonus artifact synergies merit. This should match other cube top end threats in power but that is not all it needs to do to pass the test phase, and I am expecting it to fail. 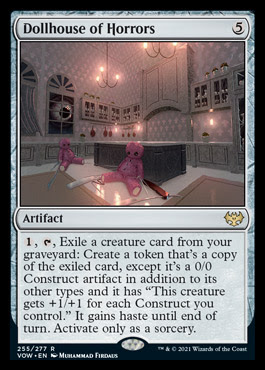 I like this but it seems a littly bitty to make the cut. If there is a boat load of things that make blood this stands more chance but if it is just a handful then this is mostly a very flimsy beater. It needs two hits by itself to get a single recursion activation banked. As a looting effect the extra costs are a real turnoff when you compare it to cards like Looter il-Kor. This is still recursive, evasive, option rich, and relatively threatening so I will toss it a little test but I cannot see it lasting. The right sort of card but just not quite passing the bar for raw power. 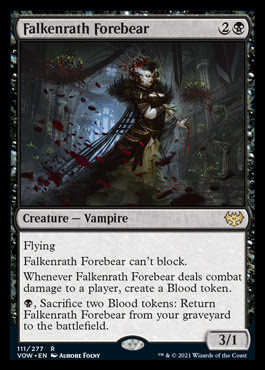 This seems like one of the best of this cycle. Vedalken Heretic didn't see much play but this is because it is gold and the wrong sort of gold (cheap and narrow). Give it some upside and take away that awkward green and you have quite a scary little card. This has a real Ragavan vibe about it. It is so cheap and so much value if it connects that you have to answer it. This means blowing removal ideally or getting down blockers. The latter however risks them getting removed and that value getting going. This backed up with a little bit of bounce or burn or really any kind of removal is going to put the wind up people and steal a lot of games. Having your two drop removed is rarely a big deal and when it has a pretty powerful disturb ability it is even less of a problem. It should be fairly easy to convert Catlike Curiosity into a card and a problem for your opponent in the mid and late game. Overall this is probably going to be a two for one or better, it is cheap, gives loads of options in play, has lots of threat, lots of scaling potential, and will be able to snowball steal a bunch of games. 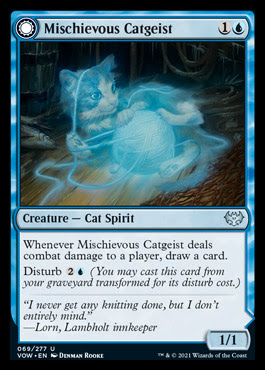 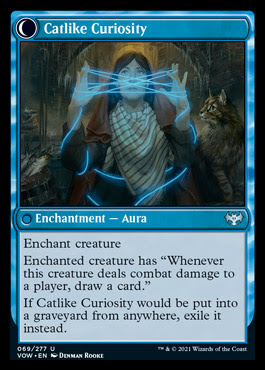 Mostly this looks like a combo card for EDH (with Abundance). In heads up play having enough land in hand to make the EtB trigger worth it isn't happening without a lot of work, far too much work for most cube situations - draft and constructed alike. 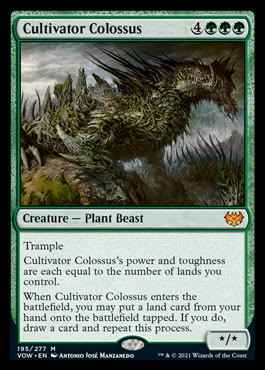 This is just a bad Murmuring Mystic which itself is around bar for such effects in cube, I run no prowess style trigger dorks over 3 mana in cube as they are too much of an investment for things you need follow up for. 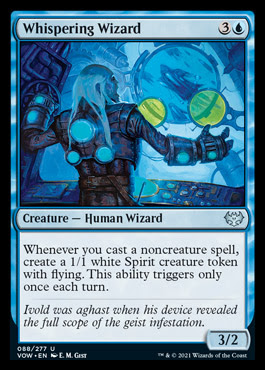 Cheap and useful little card. The front end rather needs some support or synergy to be worth it but the back end goes a good way to making up for the low power of the front side by itself. I am not overly sure what deck wants both the front and the back of this card, most lists I would consider Flying Man for don't need a flight giving aura and vice versa. Cool card though. 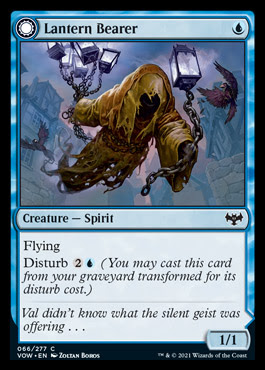 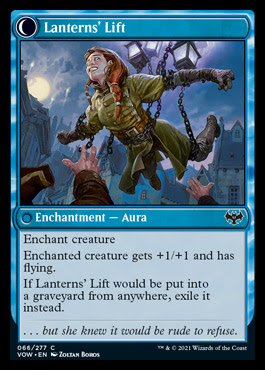 Powerful draw spell with a likely negligible drawback on the first cast. You are not very likely to be using this on curve however. It has a bit of an Expressive Iteration feel in that regard. You are either down to a couple of cards in hand when playing this or are expecting to be able to make follow up plays immediately after. I suspect this will rarely be cleaved out but the option is nice. It does mean you can more reasonably cast this twice in a game. Draw 3 for 3 is certainly powerful but it is low tempo and a little awkward at sorcery speed and with discard considerations, it is certainly not all that exciting in cube anymore. Night's Whipser is going to be seeing more play than this pretty comfortably. This is playable but equally a long way off a key card. You are not going to miss it if not in a cube. 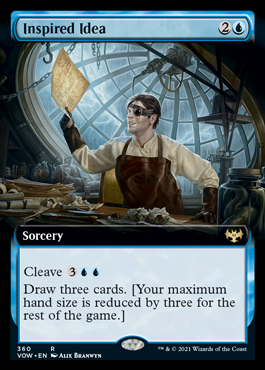 A tribal beater with some scaling. Narrow, situational, and unexciting. Might get some play due to there being relatively little payoff for the human tribe. 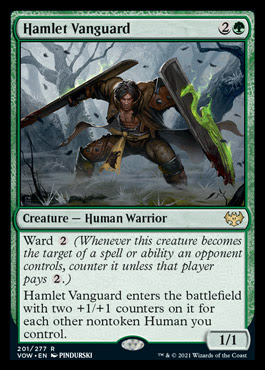 A nice little cheap beater that does some work towards avoiding being late game trash. For the early game this is a 2/1, in the mid game it can be a 3/2 fairly easily and has a chance to grow beyond that and become quite relevant. I prefer this to the likes of Experiment One and Pelt Collector as it has a better floor. Great card for tribal. Solid card generally. Green aggro has ben doing quite well and while this is no Hexdrinker some more viable one drop threats can't hurt. 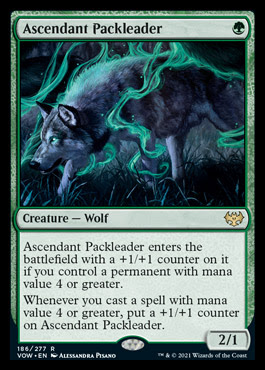 Likely some silly combos with this but you will need to spend a lot of mana to get there and the Crawler is going to need to live as well making it a bad combo at best. Pretty rubbish if not built around as well resulting in a card that is just good old fashioned bad. 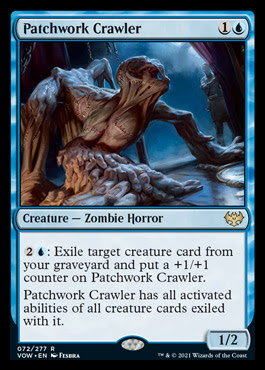 I like the idea of a mana rock that affords some bin control but this is way off the mark in power level. 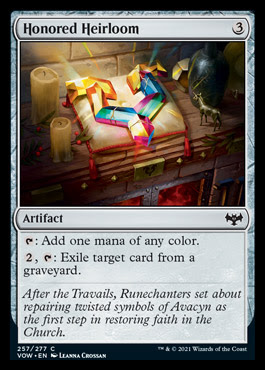 I rather like this. It is ongoing value and threat. It feels like another planeswalker you can't attack. Four mana to make a 1/1 every turn is not the worst. It is by itself not all that impressive and doesn't hold up compared to Elspeth Knight-Errant even taking the immunity to attacks into account. The seven damage aspect however adds a lot of game to this card and probably does pull it closer to Elspeth in power level. If things stall out at all it isn't going to take long to get to 13 permanents and get 7 damage payoff. For four mana 7 damage and a 1/1 is already outstanding, add some bonus 1/1s to the mix to help compensate for any delay and the card is fine in most situations at most delays. It isn't even taking all that long to get to 13 with just lands, tokens and itself. Assume you can make a land every other turn from when you make Uprising on turn 4 and never lose a human nor make anything else then it will fire four turns later which is great and probably near the floor. I think I would play a suspend 4 card for 2RR that dealt 7 to any target and made a 1/1 token each time it ticked down. There will be some interesting lines involved from both players getting this to or off exactly 13 for the trigger. I look forward to playing with this and somewhat hope it passes the testing phase. 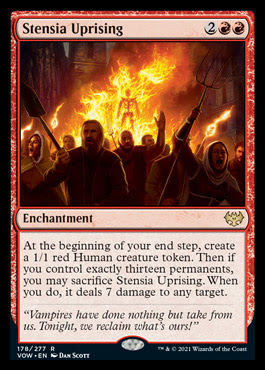 If you are consistently discarding cards a little each turn and plan on a medium to long game this is a decent card. Sadly that is not very many builds and so this is super narrow. High power potential but demanding on the support, both from cards and from the archetype strategy. 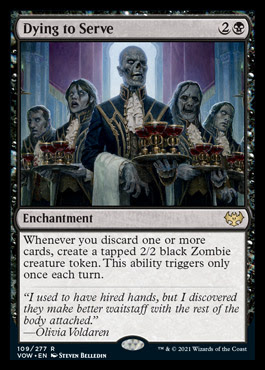