Not totally unplayable but incredibly low powered. Body is small for the cost and the effects are all slow to take place. I am sure I can just cast the things in hand before this can cheat them in. Haste would have made this drastically superior and even then I wouldn't be playing it many places outside of tribal or blood decks. 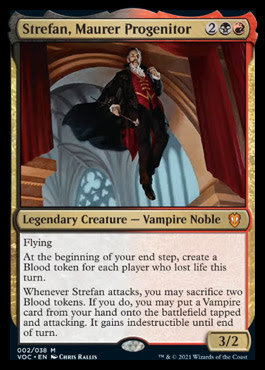 A very silly but fun card in multiplayer, a bit too symmetrical for 1v1 play. 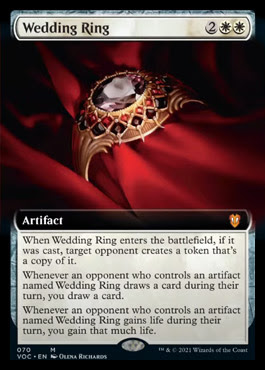 This is very powerful but a little all in. You need a certain number of things in play to make the cost reasonable and to ensure triggers are had right away ideally too. While this does have some mass removal protection it doesn't stop you getting stranded with this dead in hand. You somewhat need to develop hard to deploy this and if you get blown out before Millicent can be played you are unlikely to ever get there. The more you have cards like Spectral Procession powering out tokens for little card investments the lower the risk of this card is. Sadly that also reduces the payoff of this card as well but I am generally OK with that, the card doesn't lack for power. It is fine at 4 mana if you never have another non-token spirit. It is good at three and silly good at two mana. Add a dash of non-token spirits into the mix and it jumps in power plenty quick enough. Tribal only card but one well worth taking note of. 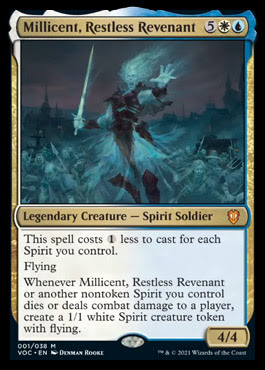 I do like the flash here a lot but the six mana 4/4 and 2/2 token fall a long way shy of the Grave Titan level we like on our six mana stats cards. While this can snowball out of control it is slow to do so. You need to be playing other wolves to speed the whole thing up and give this an appropriate power level. As such a tribal only card but pretty close to being a stand alone. 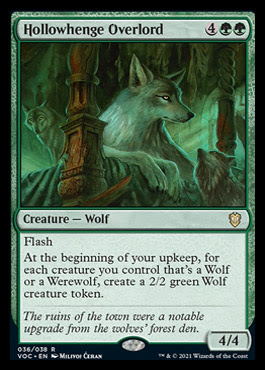 Snapcaster Mage meets Dreadhorde Arcanist. The norm for this card is going to be a four mana 3/2 flyer that casts a one mana burn spell or cantrip. The mana efficiency is better than with Snapcaster Mage as is the relevance of the body making it more of a two for one. The flash and target range however do make Snappy a much more reliable and much more versatile tool. Given that you rarely had enough one drops to make Dreadhorde Arcanist good enough I am not holding out loads of hope for this. It is certainly not impossible that the spirit count in cube extends the effective CMC range enough to make this playable. You also need less in the way of targets for this than Arcanist as you are only expecting to trigger it once, you at least hope to hit multiple times with Arcanist. Further to that, the opponent has less time to react greatly increasing your odds on getting to cast a spell again with Spectral compared to Dreadhorde. All told this seems better than Dreadhorde Arcanist in cube despite still being a fair way off Snappy. Worth a test at the very least. 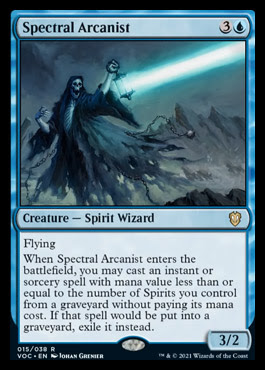 Midnight Haunting meets Secure the Wastes meets Careful Study. This does a lot but it is all sorts of awkward. It is an X spell that is hard to scale up. It is a card quality spell than forces you in certain directions to make the card have enough value. It is a mashup of card quality and support effects on top of board presence and tempo ones. All are good but they do not typically overlap in the game plan of an archetype. How many decks that I am running Midnight Haunting in do I also want a Careful Study? Doesn't feel like a lot, even if we up the power level to reflect them being on the same card I still don't feel like my Faithful Mending and Lingering Souls decks are going to be commonplace. I am drawn to this card for being versatile and option rich and direct but ultimately I think it is a bit of an awkward mess. At four mana and making 3 tokens I think it is very impressive but at most other costs and outcomes I am underwhelmed or unconvinced of the frequency it can be pulled off. Mostly I think this is going to be played at three mana and make about 1.8 tokens and be fine at best. 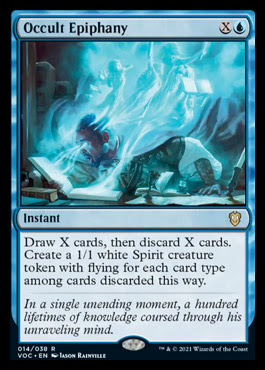 Build around combo card you could slap in some kind of Erratic Explosion build or slant there of. Too narrow and low power for use elsewhere. Slow and easily disrupted so hardly a good combo tool either. 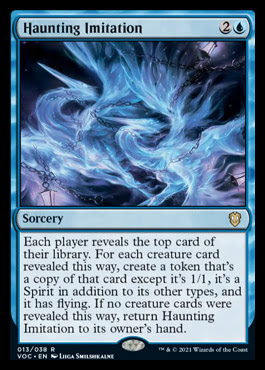 Too limited and reactionary. Reactive cards, especially protective ones that are time critical, really really want to be low cost and this is not. This also lacks the scaling of cards like Second Sunrise that allows it to do well in combo. 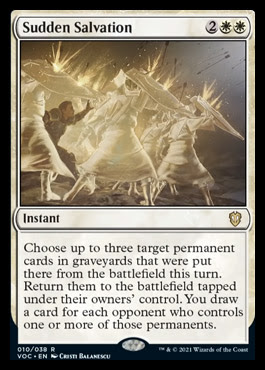 This should be very easy to win with. You can just get two card combos and win with those or you can get a pile of stuff and Craterhoof your way to victory. A card not lacking in power. Great when built around and probably not all that bad if just thrown into decks. Where this falls down is on consistency grounds. It is easily disrupted and can simply be a do nothing if you somehow fail to fill up your bin with enough stuff to make this worth casting. 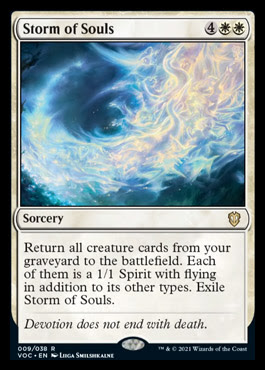 Priest of the Blessed Graf 1

I am not a huge fan of this more lands mechanic in 1v1 play as it is so polar. With fewer lands this is pretty strong, with more it is unplayable. On the play, against a mana screw, or a deck than can operate on 3 land, this has every chance of being rubbish and so don't play it. 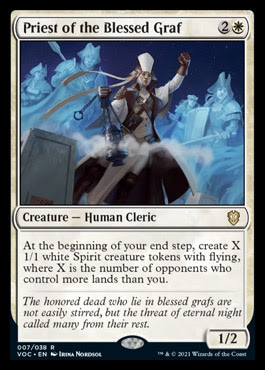 The mana cost on this trigger makes it fairly useless. I don't like relying on my opponent and their deck for my stuff to work either. 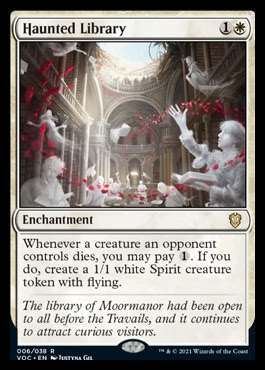 Improbable Alliance on a 2/3 flying Thraben Inspector for the princely sum of 4 mana. At three mana this card would have been amazing. At four I am not sure it quite packs the punch needed. If you can get at least two tokens then the card is impressive but that is going to take a couple of turns to do, and likely some mana invested in non-tempo things such as cracking clues. I do like this card, it is the right sort of thing for cube but I fear getting value from it with tokens is going to be tough and cost you in a variety of ways. The card is fine and I want it to be good but it is certainly no Whirler Rogue. It may not even be a Murmuring Mystic or Master of Winds. Fairly well rounded with a useful body, an inherent two for one, and ongoing threat and value with the token production. Just a little bit lacking in power and punch for a four drop. Worth a test but probably not worth getting any sort of hopes up about. 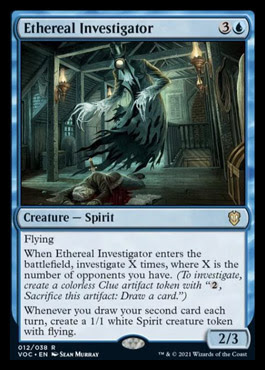 Disorder in the Court 3

A flicker effect with decent value and scaling potential. You can use this equally to retrigger your EtB effects, protect your dorks against removal, clear away the opponents blockers, or just kill off their tokens. This is more powerful at higher values of X as with most X spells however thanks to the clues this should at least be fine for any value. Low values will certainly have the highest instance of coming up. A bit situational and gold for my liking but something I might consider in a flicker list. 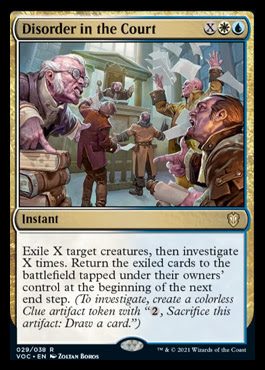 Next level narrow. Much as the power level is pretty high here I am not even sure I would play this in a deck full of flying creatures. I think I would need them to all be things like Muldrifer and Cloudkin Seer to properly tempt me. The floor of Donal just being a Hill Giant is a turn off. No flying himself also hurts his potency in a deck trying to work with flyers. He has an awkwardly low floor and beyond that tends to the win more. 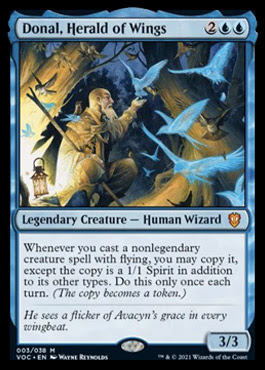 Well now this is actually pretty impressive. This is one of the most powerful madness cards to date and gives the mechanic a much needed push. This is massive for the cost and a reliable two for one. It is unplayable without the discard support and as such too narrow for drafting cubes. Nice and interesting for the world of constructed however. 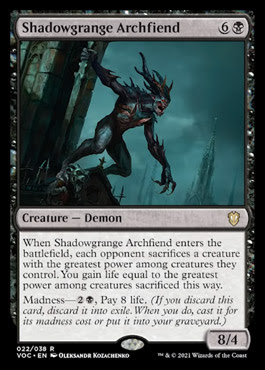 Needs too many dorks in play to be good. If you are connecting with more than a couple of dorks you are winning. If not this is dead to rubbish. Don't play situational cards that are win more. 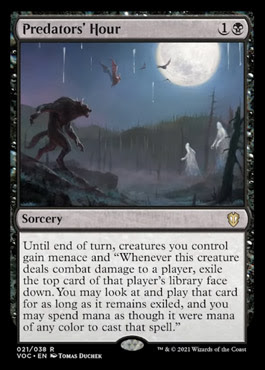 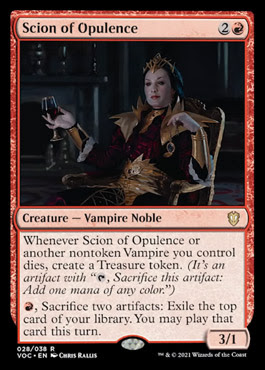 A reasonable little token producer with a big old pile of upsides. Free blood tokens is great. Sacing 13 of them is unlikley to come up but is a thing you can work towards and threaten. I like this but still cannot really see it outside of a tribal deck. 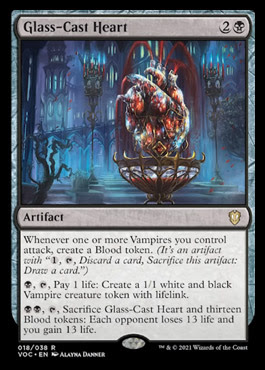 Cards like this just don't do well in cube. You can just play cheaper and quicker cards to recur stuff if you are bothering to set up such things. If not then you can play more reliable sources of value and tempo at the higher costs. Not a card I expect to play with in 1v1 magic. 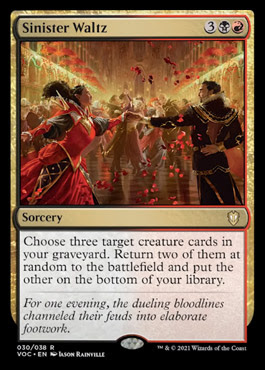