Cute land for tribal vampires being a bit of an upgrade to a pain land. The ability is cool, but cool rather than all that powerful. The strength of this card is in the fixing. Good in two colour vampires and great in three or more colours. Handy support in madness vampires but probably all a bit costly on the blood side of things. As far as blood goes I am pleased to see another token of this nature introduced to the game. Clues, treasure, and food have all been great for the game and so I am excited to see what they do with this latest addition. 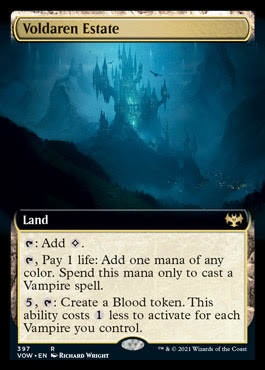 This smacks of Traverse the Ulvenwald. Ley of the Land is a fine floor for the card. Gold Diabolic Tutor is a somewhat less impressive "ceiling" for the card however. This scales up in utility rather than actual power and so it is harder to find good homes to utilize it in. For a deck to want this it needs to want a four mana tutor which isn't a combo deck nor is it a deck trying to use tempo. This certainly will not supplant Traverse or other more general good black tutors but it is not without hope all together. 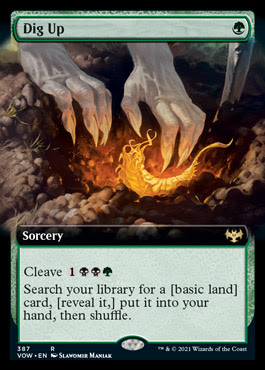 This seems fine on power level and good as far as utility goes. Neither a 4 mana 3/3 flash flier nor a 4 mana Disallow are impressive but neither are they bad. I have done a fair amount of playing Subtlety as just a flash flier and used it to block, beat down or handle walkers and it has been useful in that capacity. I probably wouldn't play this if it were just a Disallow or a Cosmos Charger split card but Overcharged Amalgam has a third mode when you get to exploit something of low value that makes it  a modal card with fuse that allows you to get both bits. Cashing in a crab token or a Fblthp for a 3/3 flier seems decently powerful. You do not need to counter something that expensive or sac something that cheap to feel reasonably good about your exchange. A counter effect is worth at least two mana and the 3/3 flying body is also worth over 2 mana. Just so long as what you sac is costing similar or less mana in real terms than the thing you are countering you are pretty well up on the exchange. This is probably not that dissimilar to Subtlety in cube play. It does not have the ceiling Subtlety has but it is a bit broader in application and a bit more rounded when it comes to playing it at four mana. I certainly overrated Subtlety on initial review but the card is still solid and so this feels like it has a decent chance in cube. 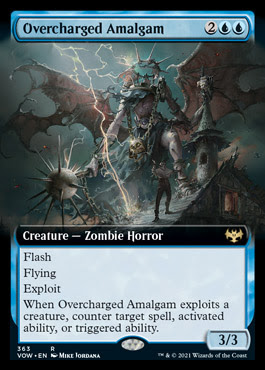 While this can dominate a game all by itself it is mostly complete garbage. Paying 3 mana for a 1/2 that then needs to attack alongside a bigger thing and then needs to continue to live and ideally continue to train up is all very wishful. This is a poor threat and even worse removal. Yes, it can be both and yes, it is ongoing removal when doing both. The ceiling is stupid but that doesn't make for a good card, or in this case, anything even close to resembling a good card. I am not sure this would even be good enough if the exile was permanent rather than Oblivion Ring style. Also, Ollenbock? I can't read that as anything other than "en bollock"... 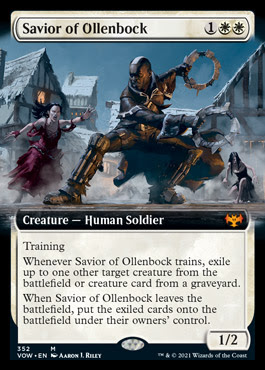 Very traditional middle of the road planeswalker. A plus to gain card advantage and a minus to protect it and affect the board. The starting loyalty and costs are all nicely in line for a four drop walker and what the effects are. The option to take the card and lose the life on the +1 is a huge convenience boost allowing you to play Sorin regardless of your casting costs unlike with Dark Confidant who can be a little sketchy to run alongside a bunch of delve cards. The -2 is powerful as well. A 2/3 flyer with lifelink is relevant. More relevant than most other tokens generated by walkers. The lifegain helps with the +1 and is a threat by itself against aggro decks. Flop out Sorin against a red deck and make a 2/3 and they need to kill it and the Sorin immediately else they will quickly fall behind and the game will be out of reach. It is pretty much an automatic two for one that they need to take the hit on immediately else it spirals out of control for them. Just making a pair of back to back 2/3 fliers will be very powerful in a lot of settings either totally stabilizing against aggression or threatening to outright win the game against some slower decks. Sorin isn't exactly exciting but he is doing the right kinds of things with sufficiently decent power level. As such I cannot see him failing to last in cube. He is highly comparable to Ob Nixilis Reignited while being a 4 drop not a five drop. Ob at four mana to play and with 4 starting loyalty would feel close to this Sorin while being a lot better than his five mana actual self! Sorin the Mirthless is also entering a format where there are scant good planewalkers in black at the four mana mark. One of the Liliana's is good but she is less well rounded and less potent. The power here is solid but not insane however the suitability and demand on the card are both higher than it is with most cube walkers and so that should ensure this does well for itself. 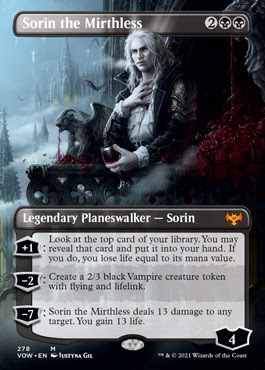 A 3/4 flying haste that will Shallow Grave things into play for potentially a long time for you. You will not need to get stuff that is all that powerful or costly back before this is good. You will not need to do it many times before the game is won either. A single Gonti or Ravenous Chupacabra will be great. Even just an Acquisitions Expert will be decent. Get back a Titan and the game is going to be done right away. Oliva can pretty much end a game on the spot and provided she has targets to recur will do so naturally in a couple of turns with ease even with just cheap chaffy dorks. She is a bit like a hyper aggressive and low mana intensity Scarab God. While she might be more impressive in the tempo side of things she has two big flaws (other than being a gold six drop..) The first is that of needing targets. You card looks poo when they have a Deathrite or Scavenging Ooze in play with mana up to activate. Equally your card does fairly little when it is killed. This latter issue is the smaller of the two as it haste meaning mana up and instant speed answers only but I do like a bit more security and reliability from my six drops. Too narrow for my liking but not short on power. 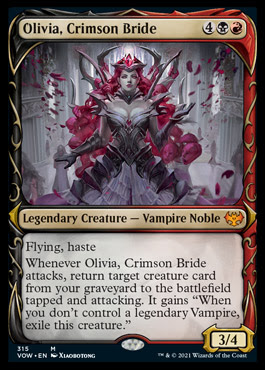 This has too much stuff on top of an acceptable floor to be anything other than playable. At just a cheap evasive dork that will give you some card quality or artifact sac fodder the card is fine. Cheap and useful. Flipping this all by itself will be rare but it will be highly impressive when it does happen. Your 2 drop is now a 3/3 flier that chucks out 2/2 fliers each turn which will end games and break stalemates quickly. Not any sort of bomb but a fine and playable card. 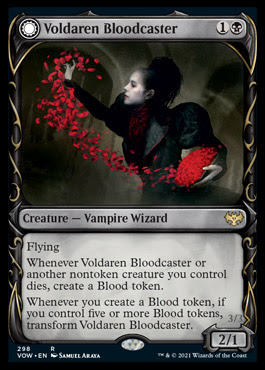 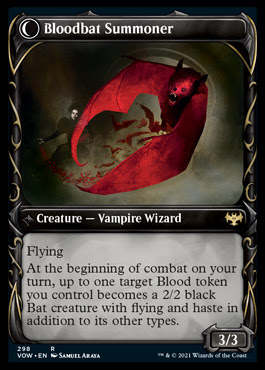 A one use 4/4 flyer that then disturbs as an aura to turn something into a Geist of St Traft minus the hexproof. The latter is risky and clunky but fairly powerful. The 4/4 one hit body is a little more dubious. It is a bit like a crap removal spell that is relatively easy to navigate. I find myself wanting to compare this card to Baleful Strix but it is obviously far less convenient and ultimately playable. In order for this to be a better card than removal, even bad removal like Gideon's Reproach, you need to make the disturb mode good and that will not just happen. Ideally you need hard to kill dorks with evasion to enchant, perhaps with some protection in instant form to back that up as well. Not many cube decks fit this bill and as a result I think Dorothea is not making an impact on the world of cube. I will test this so as to learn about it. I feel like there might be nearly enough power to compete in cubes but I fear it is still too unsuitable in terms of archetypes and support for it. 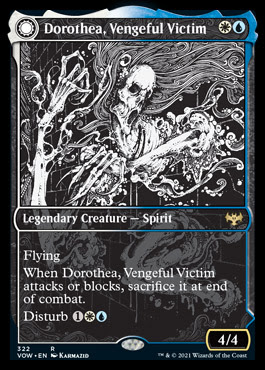 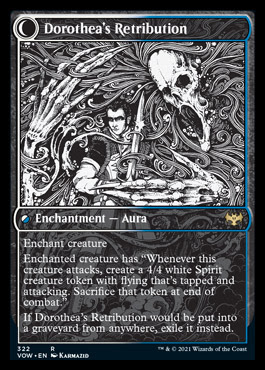 Narrow and very expensive. I wouldn't even play this in a counters deck as I can get plenty of payoff without needing to go near cards over 3 or 4 mana. Powerful card but ultimately in practice quite poor. 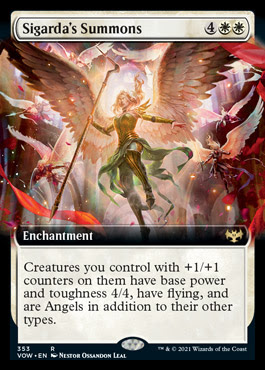 Neither side is powerful enough for this to really shine as a stand alone. I imagine it is playable as a cheap beater with some upside and utility as the game goes on but it will not blow any minds. I don't even think the synergies are that exciting, be they spirit ones, graveyard, aura, or whatever. I think you will need several overlapping synergies this fires on before you consider playing it. 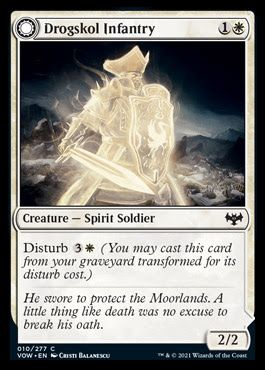 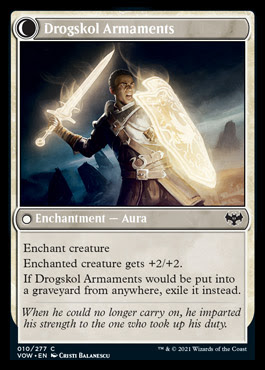