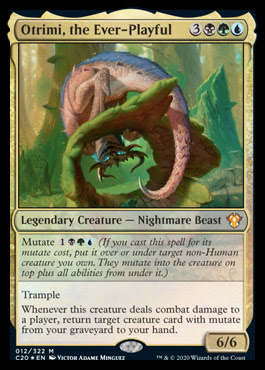 A nice take on mutate in that you use it to accelerate it out and give it haste for the combat trigger. Most mutate creatures you mutate out for the trigger at increased cost. A great card for a themed constructed deck, commander or otherwise, but too big, gold, and narrow for drafting with. The power level is certainly there, even without cards to return. A 6/6 trample with pseudo haste is a serious thing. Having to lose a dork isn't ideal but it can sometimes be turned into an upside as well as seen with the spike in price of Cephalid Constable! 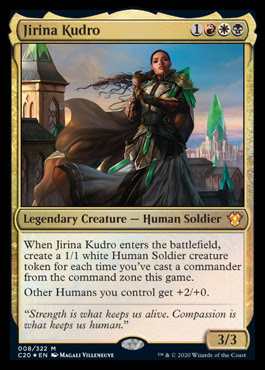 While this is a Hill Giant when not in a commander game a +2 attack lord is not to be sniffed at. This can absolutely end a game out of nowhere. So much so that I suspect I would play this in tribal human decks that support the mana. Most of those I build in cube do not but that is because I only lightly support the tribe in the drafting cube. In constructed singleton events humans is typically more colours and likely can pack this with ease if they are so inclined. Another card full of power and potential but suitably narrow to keep it out of most places. 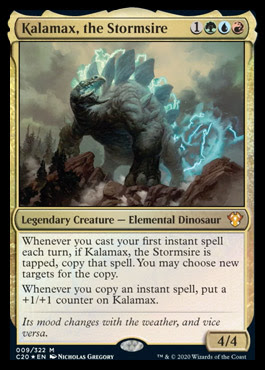 Not really a cube card. Too gold, too expensive, and far far too conditional. You need this to be in play and be tapped and cast another spell in order to get the Fork effect going. Likely a good fun commander however. 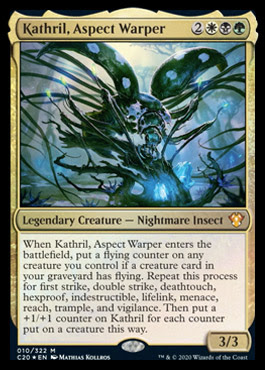 Potentially both very big and very scary. It does not take many keywords before this thing is terrifying.  A hexproof doublestriking indestructible lifelinking flying trampling 9/9? For five mana? Yes please. It is not even that hard to setup. You can also gain immediate value by buffing up some dorks in play. Minor but still relevant. Still too gold and narrow for the drafting cube but powerful enough with sufficient redundancies and support that I can see it being a decent build around in singleton decks, big and small. 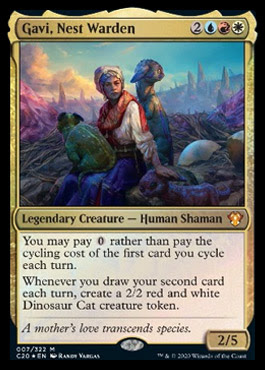 Likely the most abusive of the facing commander cards. Mostly the result of the big effect on the decree cycle of cards but Gavi is still decent just with cheaper and more conventional cycling cards. She makes a free 2/2 the turn you make her, perhaps on in your opponents turn too. I can see Gavi making it into most of the various cycling deck builds there are out there. Too narrow for draft cube but great as soon as you can build around to any degree. 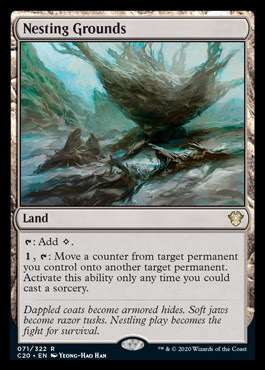 A nice little utility card that can slot into a lot of decks. This is especially good to use with -1/-1 counters as you can move them onto opponents stuff despite having to start life on one of your own dorks. What makes this good is that it is refreshingly cheap to activate which is somewhat of a rarity on utility lands. While this is decently playable I suspect it will still see relatively little play as it still competes with all the other colourless lands for the few slots you can allow colourless land in most decks. Very likely too situational for the drafting cube. You just get more value out of a Mutavault in a meta so dominated by planeswalkers. I do like the danger this presents when used with walkers as you can potentially sneak a walker up to their ultimate using this without opponents expecting it. 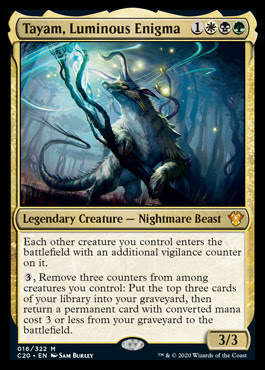 Ultimately this seems like a Hill Giant. Sure, if it lives and you get to use it there is some value and utility on offer but this is a four mana 3/3 most of the time in a heads up setting at cube power level. I wouldn't entertain this if it were one colour and not three! 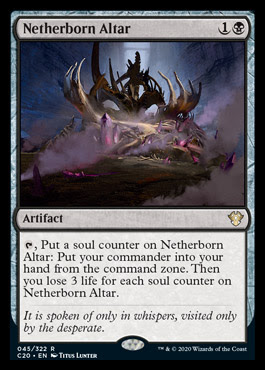 This does nothing outside of commander but I expect this to be one of those cards that shoots up in value quickly as it winds up a staple in many a list. It is the Dockyard Extortionist of this set although not quite as busted. Pick them up soon before they shoot up in value and never come back down. I love the design on this card, it is clean and interesting. A nice pairing of mechanics. It is however too fair for cube. Needed some evasion or reduced costs to have a shot. The floor of a three mana 0/0 is a low places to have to climb from. 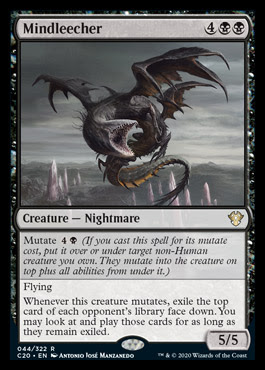 I will actually test this. Much as a 6 mana 5/5 is a bad floor it is not as bad as say a 3 mana 2/2 would be. At least a 5/5 flier is a proper threat. Still, pretty weak. It is all about the flier for 5 that steals a card and probably attacks that turn as well. Card stealing is really strong in cube and if this was an EtB rather than a mutate it would be a lock in. As it is I expect it to mostly just be weak as you often will not always want or be able to mutate away another dork. Worth a test if nothing else. Black doesn't really have any great hard hitting five drops at present either. This could just be a tasty new Thundermaw! 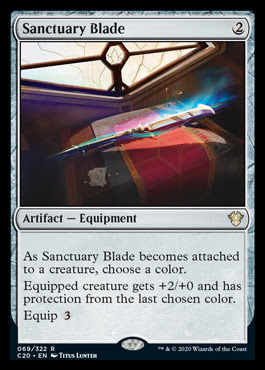 Cute design but all a bit over cost for use in cube. Needed to be at least one less to equip and likely another perk somewhere to make this a consideration power wise. 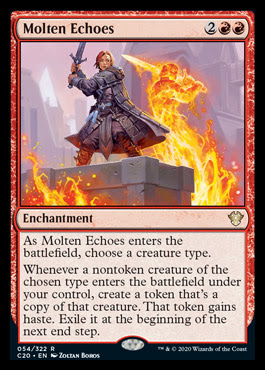 The creature type restriction likely rules this out for drafting use. Seems pretty filthy when used with the right sort of support. I very much like the idea of two Glorybringers! Even if one is just for a turn it feels like a game winning swing. I suspect you can build around this in a combo sort of way or just naturally slot it into plenty of tribal lists and have it be great. This works wonders with loads of goblins. Super tribal Purphoros. Perhaps I need to give Flameshadow Conjuring more of a test? The trigger cost is a massive nerf but it does work with all the creatures at least. 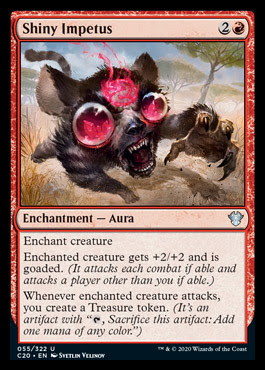 Captain Lannery Storm in aura form! This has a couple of uses but it is all super so narrow, situational and low power I cannot see this getting any cube love. The decks that really want treasure do not have the targets or game plan a card like this wants. 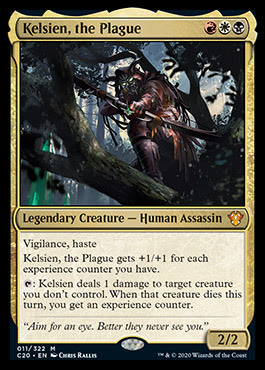 A lot of power packed into this Prodigal Sorcerer! I think it is only the Mardu colours making this just a bit too narrow. Power wise this is a great card. It should two for one most of the time and can often do more. Either killing more stuff over more turns or just getting in damage. You can fairly legitimately swing with this for 3 on the turn you make it having pinged off a token or one drop already. If you get to kill a card of value or perhaps clear the way to take out a planeswalker then Kelsien is really really broken. A huge value and tempo swing on top of an ongoing problem. I am talking myself into giving this a more thorough testing. Card seems almost oppressive in my somewhat midrange planewalker dominated cube. 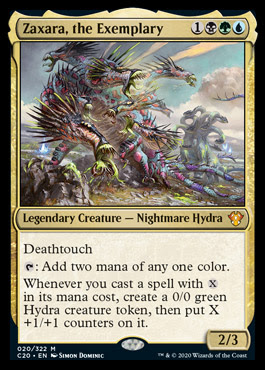 When Scrabble jumped the shark and let in proper nouns I wonder if they considered this sort of thing? Much as I can speculate on the implications for this in word games I can be more sure of where this will fit in with Magic. Seemingly a huge deal for commander where there are many infinite mana combos and hydra synergies waiting to be abused with this as your commander. At least one of those things will be powerful too. Outside of commander this has far less hope, too slow, gold, and narrow by all accounts. 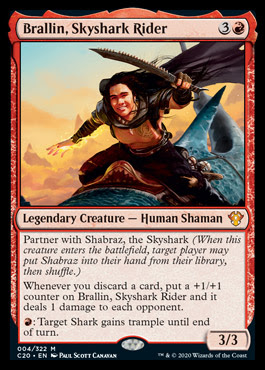 Another well designed card for commander in that the unique effects offer some great deck building opportunities to commander but the power level isn't all that dangerous for other formats. Brallin can be a backup Glint-Horn Buccaneer for discard decks but he is a bit of a Hill Giant. 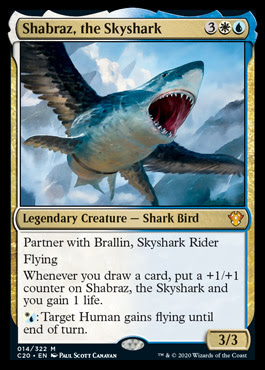 Mostly this is just a nice way to allow Azorius colours into your red Brallin deck! The card is pretty weak in every general sense and I doubt it is getting much use when not a free Partner.