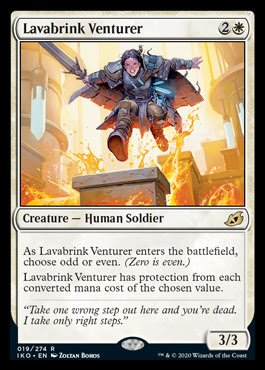 This is pretty much half of a True Name Nemesis. A bit more robust against Plague Mare and a bit easier to cast but rather more vulnerable otherwise. In constructed this is pretty scary. If it is a thing people will have to play a janky array of removal rather than the optimal suite as this can then often act like a True-Name. In cube things are already janky thanks to singleton. As such this is going to be a bit more potluck. Good deduction, info and boardstate will let you milk a bit more value from this but it feels a bit lame. Sometimes you will randomly hose someones deck and get free wins. Other times they will have suitable answers at odd and even and your Trained Armadon is balls. Even if this is good it is polar and about as dull and uninteractive as possible. Also, you can't say odd if you want to Sword it up, can't say even if you want to Jitte it up. I will test this but I expect it to fail and really hope it does too. 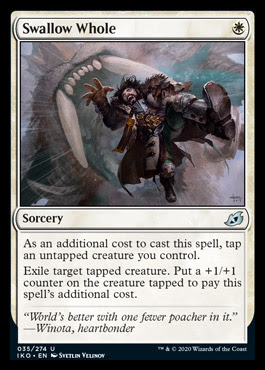 Excoriate cost 4! Covoking one dude for 3 mana and getting a counter sounds great. It probably isn't though. Excoriate is awful. Seal Away is half the cost and instant and still pretty poor by cube standards. Much as I want to like this what with it being a high value one drop I think it fails in cube. Needing a dork is lame, it makes this a dodgy control card. It slows your aggression in aggro decks and likely can't kill off would be blockers. Needing tapped targets on removal is really bad and sorcery speed amplifies the drawback significantly. White has enough removal it that it has no need of conditional, situational rubbish like this. 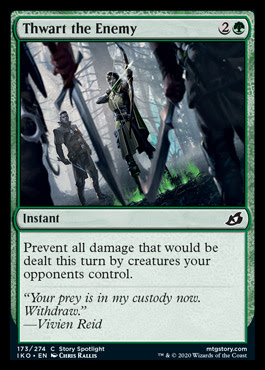 A nice clean version of an effect we have had for ages in a bunch of different guises and colours. When this works out it is super powerful but mostly it is just a Fog or a Regenerate. Too low power given the situational nature of the card. Decks that want Fogs also typically don't play loads of dorks, certainly not ones for combat of high value. As such the modality of this is less useful too. 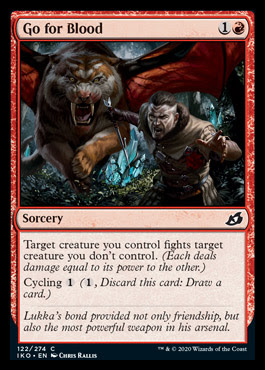 If only this was green, I would be hopeful again of yet another fight card... Red doesn't need this and is only really likely to play it in a deck needing cheap cyclers. I did claim that the floor on cheap cyclers was probably a 5 but I also need to somehow represent the usefulness of the effect relative to the many cheap cycling cards. 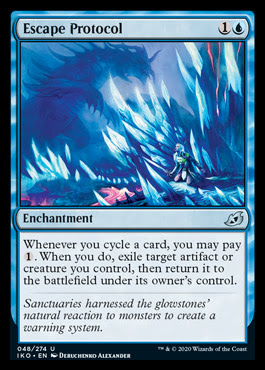 Very dangerous little card. Thank god it has an activation cost else this could be oppressive. As the flicker is instant return it is really useful for locking people down with EtB counter and bounce effects. I can see this making it into a constructed build that is reasonably competitive. EDH lists too. It might be a bit much to fit into most 40 card constructed decks and is a bit narrow for limited ones though so not expecting loads of cube action. Drake Haven is more easily used in a cycling deck and even that gets little action. 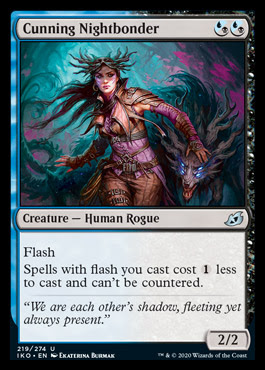 Looks like we have a flash build coming out in Ikoria. With flash having appearances all over magic there will be plenty to build it with. It all comes down to the payoffs. This is a pretty good one for sure but rather more will be needed. There certainly isn't the density of flash in a cube limited setting. Instant speed Preordain in standard sounds juicy. 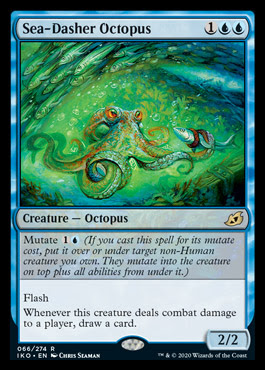 I really have no idea how to rate this. It certainly isn't a bomb but it could range anywhere from good in the cube to pretty useless. And good in cube does typically mean bomb in at least a couple of other places. I suspect it probably winds up a little below the bar for entry but none the less one I will be testing. I think it is more to do with blue not being that creature focused rather than the card not being there, in another colour I think this would do a lot better in cube. The floor of a flash Grey Ogre you can draw cards with is quite nice. The flash should make it pretty easy to get one hit in assuring you a two for one. The mutate option is intriguing as well. You can use this a little like a Ninja of the Deep Hours. Ideally you want to use this on an evasive dork. Turn that thopter token into a 2/2 flier that draws cards. Make that 5/5 trample into a card drawer etc. Overall this has a higher floor than Ninja, more utility and better overall tempo. It is certainly quite a fun card which helps it out in cube too! 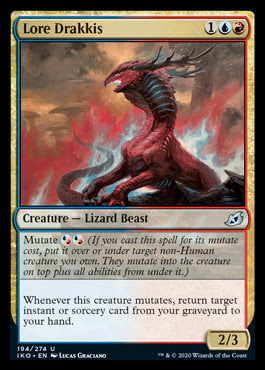 All just a bit slow and fiddly. It is a bit like the Rampant Growth effect on a mutate guy. Why are you playing this over say a Mission Briefing? Are the potential +1/+2 stats on a 1/1 dork that exciting? This is a far cry from a Snapcaster Mage. It is conditional and not a two for one. Still, it is playable if you really want specifically this kind of recursion. I don't think red has much akin to this effect in that this actually returns to hand rather than giving flashback or exiling it to play it. 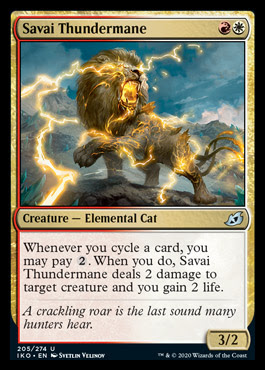 I might play this in the aggressive cycling deck... a deck that starts life sounding self opposed.. Even there I am not sure this is all that good. It is likely 3 mana to Shock dorks, and it needs this to still be alive and you to have cyclers. This is a bit fragile and a bit on the costly side. Mostly it is narrow. It certainly has the capacity to dominate a game far harder than Grim Lavamancer ever has but rarely will that happen. High ceilings are all well and good but we care about averages and playability and this is not going to pan out well in those areas. 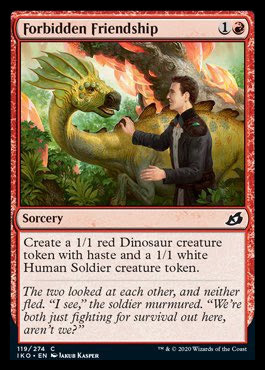 Bam, a tiny upgrade to Dragon Fodder. Little upgrades are a big deal on cheap and otherwise playable cards. While this won't feature in goblin decks it will be the 2 mana token generator of choice for red after Mogg War-Marshall. A white human may even be a lifeline against a Sword of Fire and Ice or some other pro red card. The naming team seem either very on it or rather off it depending on your outlook. Absolutely 100% this name implies some bestiality. The art is not ruling it out either. 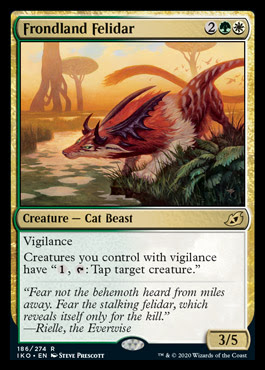 Powerful but clunky, narrow and slow. I wouldn't be all that excited by this in a deck where most of my dorks have vigilance. This does very little if it is dealt with and offers little threat on its own making it very much the wrong sort of card to cost four mana. 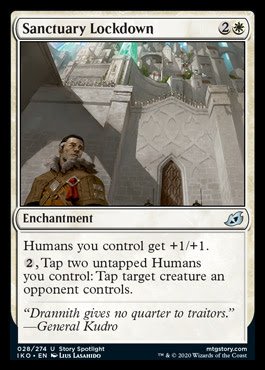 A powerful tribal anthem that could well do enough to make the cube simply due to the frequency of humans, both in white specifically, but also in the other colours. This gives some real reach to your weenies. You can do a mass tap down at opponents EoT and force through a lot of damage in board stalls. Probably a bit narrow for drafting cube but worth a quick test and certainly a great option for tribal lists. 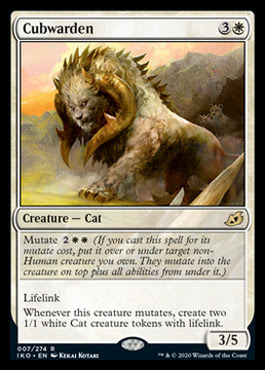 I guess I play this in cat tribal decks. Too low power and conditional for general play though. Not even very good when performing at ceiling level which is a big downer on a somewhat conditional four drop. 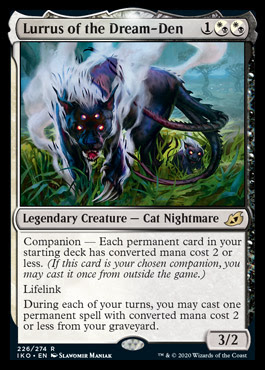 Lurrus of the Dream-Den 7.5

Interesting and dangerous. For limited cube this hits a good sweet spot. It is not impossible to meet the requirement for the companion but it is not a big deal if you fail as the card is nicely playable as a maindeck card. Mini Muldrotha! The floor is just decent. Playable in multiple colours, decent enough body and ongoing value/utility. I imagine this will be a companion 20% of the time it is played at best probably. Being allowed instant and sorcery cards that cost three or more helps this to be used as a companion without gutting the potential power of your build. Cards like Jitte and Lingering Souls also let you have cards that are permanents that effectively cost over two mana. Where I see this getting really dangerous is in constructed. A lot of legacy and vintage decks already qualify for this and can abuse it fairly well with cards like Lions Eye Diamond. This feels like the Snapcaster for permanent cards but better if left in play. Somewhere between Meren of Clan Nel Toth and Snapcaster I guess. Still, one of the standout cards from the set.