Fatal Push is great, it is pretty comfortably one of the best removal spells in the game, especially in modern. Push has done more for the price of Tarmogoyf than any amount of reprinting has achieved thus far! Despite all this I continually find myself wishing I had a Disfigure instead of the Push when I am playing cube. I put this down to bias initially as one expects Push to outperform Disfigure so you notice the times it does not far more than you notice other things. There are some factors which make Push better in modern than in cube such as more cheap dorks as well as more sac lands for revolt triggers. I knew Fatal Push wouldn't be as good in cube as in modern but I still assumed it would be the best black removal spell in cube. Now I am not even sure it is the best one mana black removal spell in cube! Let us have a logical look at comparing Disfigure to Push and find out how reasonable a claim that Disfigure is the better card might be.

The first port of call for comparison is simply the target range. In my cube Disfigure kills 67.6% of creatures and this goes down to 60% of creatures in the CubeTutor 720 average cube. Fatal Push is obviously rather more complicated to give figures for with its potential range based on having revolt or not. In my cube it kills 54.3% of creatures without revolt and 84.8% with which would represent a 69.5% average if you had revolt exactly half the time. Again we see a decline in the kill potential of the card moving to the CubeTutor 720 average list with a poxy 39% coverage without revolt rising to 75% with. This provides an average of 57% if you again assume the revolt trigger is active for half the time. Interestingly the arbitrary average given for the Fatal Push is within a couple of percent of Disfigure in their coverage for both cubes. In mine Disfigure is near enough two percent worse at killing than the average Push while in the average cube Disfigure is actually more like three percent better. 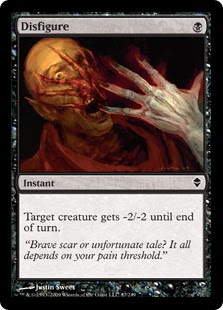 What this tells me is that it is pretty reasonable to consider the cards comparable in power level if revolt is roughly a 50/50 affair in cube. There is still rather more too it than that but we are just going to focus on revolt at this stage. Revolt is not quite the on off thing I am making it out to be. Even if you are able to "freely" trigger it with a sac land that is still a restriction that lowers your options. Perhaps you wanted to lay a quick land as it is your last chance to make it before it comes in tapped. Perhaps you have to take an extra two damage from a shock land because of using your sac land this way. Revolt is rarely something you just get for free, you can often find yourself giving up bad trades or taking sub par lines to get it or keep up the option on it. Sac lands and Baubles are the best ways in cube to get revolt but there are only 12 or so of those on offer. They are the best as they cost no cards or mana to obtain. Most other ways cost mana or even cards. Things like Chromatic Star are great but if you are using it for revolt you are then basically playing a two mana removal spell not a one drop. Revolt is significantly harder to get in cube than it is in modern. You need to build your deck with it in mind as well as playing with it in mind and even then I doubt you get to the stage where you have it freely half of the time. At best you have it freely a quarter of the time, cheaply a quarter, in a somewhat costly way a quarter and effectively no access to it at all for the final quarter. I can't think of a great way to numerically represent this but it is part of why Fatal Push is such a well designed card. You have to contextually weigh up the cost of getting revolt in lots of situations. That is the best case and probably the 50% mark is a somewhat fair place to put it for that if we had to allocate it a numerical value (which we do if we are to continue the mathematical comparison!). If however you have a deck not setup for revolt and built with it not in mind then you are looking at a much lower number and a far far weaker Fatal Push. This means in the average case that Fatal Push is of comparable potency to Disfigure only when you have a deck reasonably well able to turn on revolt, otherwise Fatal Push will be the tier below Disfigure in power level purely on the revolt and range aspects. It is already looking good for the argument that Disfigure is better than Fatal Push in cube if we take my very rough numbers to be at all on the money. That was only considering their initial ranges and the challenges on getting revolt and thus the effect on said ranges. There are some functional aspects to the cards that need considering, the first of which heavily favours Disfigure again. In a combat situation, or indeed with any other source of damage or size reductions Disfigure remains useful in removing things outside of its independent range. I can kill your 4/4 at little to no cost if it tangles with my 2/3 in combat and that sort of thing. Fatal Push does stone cold nothing when it is facing cards outside it's range. You can even use Disfigure as a super limp fog effect if you are desperate to protect life and loyalty counts!

Next up we have another thing in favour of Disfigure which is surprisingly relevant in cube. There are a couple of indestructible type things which you are able to bypass with reducing toughness to zero. Killing an Adanto Vanguard is a happy thing to do. While there are only a handful of such creatures it is far more significant than it seems. They are typically good cards that you build plans or themes around. I always want to equip my Vanguard and it is usually a super safe line but it might cost me the game from tempo loss if a Disfigure lands in response to the equip. 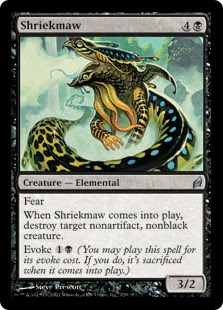 The last functional aspect difference between the two cards is finally in favour of Push. Basically it is to do with curving. On turns one and two there are very very few things that a Fatal Push can't target. Every now and again Tasigur flops on turn two but that is about it for my cube. Technically you can get out a turn two Vengevine as well! There are a bunch of things Disfigure cannot kill in those early turns. Part of the merit of cheap removal is that you can use it in the early game. As a turn one or two play Push is the better card in all cases other than Adanto Vanguard, it is turns three onward where Disfigure outpaces it. There are quite a lot of 3CMC dorks with only two toughness and hitting those with one mana removal can be quite a significant tempo swing. There are even a couple of 5CMC dorks with 2 or less toughness that Push can never hit!

Having gone through this comparison logically and comprehensively I am now pretty convinced Disfigure is the better cube card of the two. It is not strictly better as both have their own strengths and limitations. Both are interesting and well designed cards and they are fairly close in power despite my new found confidence in the Disfigure's superiority.