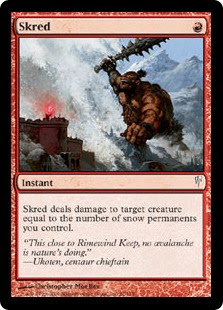 The other day a friend and I did some constructed cubing and he came up with this gem. It started out life as a Skred Red deck as found in modern however he adapted it in a unique way that really seemed to work wonders. Essentially he filled out the low end with ritual and looting cards giving him great burst and consistency. Rather than a Skred control deck he had the bottom end of a red storm deck. His top end was all just the premium red stuff. Rather than ritualing out an Empty the Warrens he would just flop a Chandra, Titan or Dragon and it turns out that would usually win. The threat and tempo of the red top end is very high, if played at all before curve it can be pretty devastating. I lost a number of games to this deck to him making six drops on turn three. This list is not exactly what he ran, he had a couple more generic burn spells and one less Commander as well as one rather more embarrassing Skred missing. Turns out I didn't have the namesake card for his deck so he just ran the vastly superior Lightning Bolt! 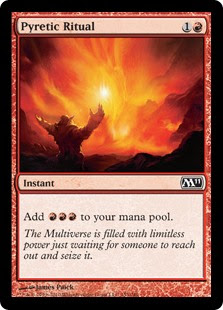 Chandra, Torch of Defiance
Koth of the Hammer
Past in Flames
Fiery Confluence There were lots of things I really liked about this deck. The innovative freshness of it primarily but also how different it felt to play. It was quick, it was option dense, it got to use big red top end that many red builds in cube can't make work. It was a deck full of some stark contrasts. Intuitively I don't think to burn resources in rituals to ramp to something interactive that then takes time to return that lost value but in this kind of deck it is a great strategy. It has a lot to do with the general way the red top end threats function. You can typically get a decent amount of initial value in the form of damage to stuff in play from them and so even if they are dealt with you are not behind in tempo. The scaling with ramp is also very impressive. By turn six 3 or 4 damage won't kill a bunch of the things people are making but on turns 3 and 4 that will provide very apt control. And once you have control you can then very easily move on to win, and quickly with a lot of them!

The combination of lots of looting, rituals, Past in Flames and Wheel of Fortune pretty much make up for any card advantage you lose through ramp effects. The abundance of the first two kinds of card really empower the Past in Flames and Wheel of Fortune. Even when the ramped out top end gets answered this deck still has a lot of legs and can recover some pretty big swings. Past in Flames was the thing that tied it all together and made it a brilliant work of art rather than a mess. The deck was a nicely tuned whole rather than a show of individuals. That being said, the Ruby Medallion was more than impressive. I got to fear it on the other side of the table, any sort of turn two, or perish the thought, turn one Medallion just felt like it spelt my doom. This deck is unusually good against the increasingly popular go wide strategies with an abundance of cheap mass removal effects. Again, the many looting and rummage effects in the deck, as well as some nice modular cards, ensure that the deck remains consistent and doesn't suffer dead cards in hand as control red decks in the past have done.

This list uses a very unintuitive blend of  effects. Most of them cause a new problem while solving a different one. Ramp solves speed issues but causes savage card disadvantage etc. All together all the problems are covered, both those inherent to red control decks and those newly caused by the other solution tools. Amazingly this quirky deck is rather lacking in weaknesses. It is a bit too specific to be a thing you would want to support in a drafting cube. While it almost certainly isn't a tier one cube deck by any measure it is absolutely a strong and competitive deck. It might be a good rotisserie option with few contested cards, broad and high power level and hard to read (and thus counter) general direction. I suspect most people would assume something different to this almost regardless of the order you drafted it in! It lets you play red in a really satisfying and involved way while putting loads of hard to use, yet also very fun, red cards to work.
Posted by Nick Nobody at 04:05