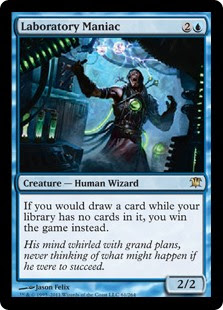 A little while back I  did an article on this list but it was mostly done as a theory exercise. I enjoy being able to look at numbers fairly directly for deck building and only the most linear of decks allow for that such as mill and burn. The turbo drawing Lab Maniac list allows for another of these but I never really took the deck that seriously. I theorised about it and left it at that on the assumption the deck wouldn't be close to viable. The deck is simply too slow to compete with other linear strategies. Now because I was in theory mode I was simply trying to make the numbers as good as possible rather than trying to build the most suitable deck one could. In practice slowing down the clock of the deck and replacing the weaker draw cards with a bit of disruption and stall goes a really really long way. It turns the deck for a sitting duck into a pretty scary list. When you plan involves seeing the whole of your deck in the shortest possible time you can really easily power up the deck with relatively few cards. Most of the disruption cards buy you a turn and most do so without onerous mana costs. This in turn means you have more time to safely get through your deck. Normally just adding a handful of safety cards into an otherwise uniteractive deck would have relatively little effect. It would have a significant effect on making the goldfish slower while not having that pronounced of an effect at making the deck more robust. Because of seeing all the cards so quickly this list suffers little in terms of goldfish but gains a huge amount of safety by contrast. The point being, this rather silly looking deck is actually decently competitive and not just a good excuse to do some math with our favourite card drawing tools. That is the real reason this deck is great, you just get to draw loads of cards and that is something every magic player loves to do! It has some good matchups, is broadly at least competitive and you get to draw so many cards!

There are a few new cards that work well in the list along with some older cards I overlooked in the first build that help to empower this list over older versions. For reference here is the original article before we get to the new list; 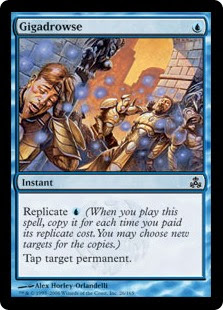 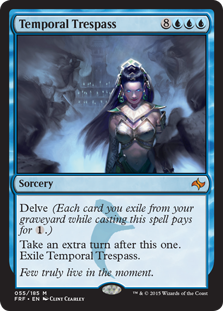 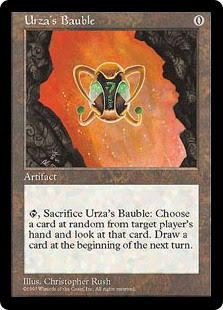 So this newer list was far from perfect, it was simply more along appropriate lines than the original "optimal by the numbers" build. It manages to have a lower curve by moving away from the five mana Time Walk cards. It also gets to operate quicker with the inclusion of Chrome Mox, a no brainer really with the need of speed and an abundance of card draw and redundancy. The Baubles both offer an unparalleled draw to cost ratio and were an oversight in build one.

The new cards are Search for Azcanta, Mission Briefing and Champion of Wits. The Champion is being run in much the same lines as the Auger of Bolas. Both do an OK job of drawing you through your deck but they do this while also threatening to do blocking and thus buy you a nice bit of time. I considered running things like Alchemist's Apprentice to further this trend. You could equally look to splash black or green for Coiling Oracle or Baleful Strix respectively if you wanted more powerful chumps that draw. I am pretty happy with the quantity used and to stay mono. 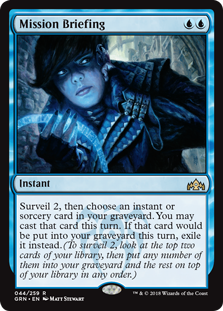 Mission Briefing was amazing, easily the best new addition. Just hitting a Thought Scour can represent getting shot of five cards from your deck. The value of recursion jumps a bunch when you are running a few disruptive cards too. This is yet another deck where Mission Briefing is preferable to Snapcaster (although Snappy would still be strong!). I wanted to include Jace, Vryn's Prodigy at first but forcing you to flip means other looters are going to get through more of your library and most of your disruption needs to happen at instant speed making his recursion less good too.

Search for Azcanta was funny, I rarely wanted to flip it. When I was overdone with cards in hand or entirely out of gas I wanted it for mana or refuel respectively however neither of these things happened often at all. The former more so than the latter. Mostly I wanted to just keep milling myself for one each turn in a controlled way. The mill per card isn't all that impressive on Search in an average way as you often have to keep things rather than risking a mill. What makes it so good is the versatility, control and options it brings. The slower you build your list and the more Time Walks you play the better search gets. It is also nice to have cards you can get out of your hand so as to avoid having to discard. There were several games where the first non-land card I played that didn't draw a card instead drew multiple! The only bad card I ran was Manipulate Fate, it is at least still better than Foresight from my first build though! While it is some unusual card quality and a solid four cards out of the library it lacks synergy with the cards that want to be involved with the graveyard. Despite this being the best Visions of Beyond deck in the cube it is still very unlikely for you to get it to draw three. Exiling cards hurts this small chance a lot. The delve cards are a bit too strong to pass up on despite their poor synergy with Visions. You can use them pretty quickly in this deck while you can't turn on the Visions till you are nearing the end. It is possible to hold off on the delve cards, through choice or otherwise, and this helps with your Visions potential. Broadly you don't need it to be drawing three. Overall Visions has less average power than something like a Ponder but it gives you more range, a different set of choices and exactly the same mill per card and mana at worst! You want a healthy number of one mana cantrip cards and with so much draw redundancy the difference between a Reach Through Mists (basic example of "draw a card for one blue" card ie floor of Visions) and a Preordain is fairly minor. Although such a thing feels impossible I am going to say this deck has enough card quality! Ideally you are using your delve Time Walk late in proceedings anyway so as to maximize your mana gains from it. It is super rare this deck doesn't spend all of its mana in a given turn. The only times it doesn't are when it needs to hold out countermagic or other disruption and that gets played around. 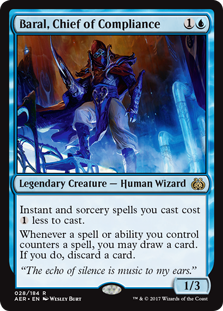 You could fit more card disadvantage cards in this list should you wish such as Force of Will. This list is far better able to support such things as I kept all the two for one or better cards like Predict and tossed the things like Careful Study, Frantic Search and Compelling Argument out. With this deck not being so much about purely racing you don't need to throw cards away for the sake of a little extra speed. The more countermagic and cards costing more than one you throw in the more Baral appeals. It doesn't take Baral all that long to pay for himself in every way if you can get some looting done. All told Baral looks like he should get more loots in than Vryn's Prodigy with this list!

As Foretold is something I quite wanted to play to really power out that draw. It would allow for Ancestral Visions to get a slot. A 40 card deck with three Ancestral Recalls sounds rather naughty! Sadly I just forgot about it in building and ended up not doing so. Pretty doddery of me considering I toyed with the idea of Ancestral Visions. It is very nearly playable in this list as a stand alone. You are rarely winning before turn seven and that gives you a good amount of time to play it. You also have some looting and card selection allowing you to not suffer having a dud late. 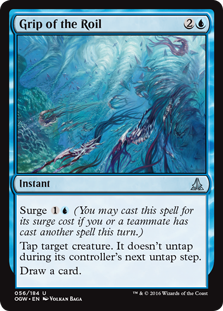 The other considerations I had were just more good one drop cantrips and cyclers like Serum Visions and Peek and then more disruptive cards. Grip of the Roil, Ice, Send to Sleep and Enervate all appeal for their progression towards your end goal. Exhaustion, Cyclonic Rift and cards like that appeal more for their raw power. This deck can support one or two more cards that don't replace themselves but you can't go overboard on it. It has six (including Search for Azcanta) non-land cards that don't replace themselves and I think seven is totally fine. You can probably get away with eight or even nine when you take in the card advantage and filtering into account.

If cuts had to be made beyond the Manipulate Fate I would look to thin out some generic card quality cards like the Sleight or the Strategic Planning. Champion of Wits could go, it isn't essential and is a little clunky. It will be super rare to recur as well. Quite possibly rarer than drawing three with Visions. You can also tweak the disruption a little based on what you expect to face. The speed bumps and mass tap down effects are great against aggro, the counterspells are better against the slower decks but also hurt your sorcery speed cards. A big part of the split is based on which ones also help protect your own combo. This is why Spellskite is getting in so easily, it is just a good cheap disruptive wall that also offers some of the best Laboratory Maniac protection in the game. Cards like Dive Down however are going a bit deep for that role.

Overall the deck feels like a real archetype that has some game against most things and has strong game against several things. It is a blast to play too. The main take away is mostly that this deck is far better than I thought it would be! A few new toys, a few build refinements and we have gone from a comedy deck to a high tier one. The new cards are not even than powerful, they just add to your potential options and synergy choices. I feel like I have devoted a lot of time to this fringe deck. I think I have done that because this deck feels like it should be a "core" deck what with being so simple and focused as well as mono coloured. It also still feels like an essential deck based on how much the average magic player like to draw cards and how this deck facilitates that more than most.