Why do the Magic Online Cubes Suck? 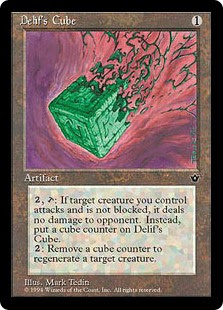 Generally I don't like to be overly critical of Wizards, don't bite the hand that feeds and all that. That being said, I think it is important to raise issues when looking at the actions of organizations, businesses and governments, especially those without alternatives. That is a pretty key factor in a democratic society and it seems to be slipping away a little. Censorship is on the up and that is a bad thing. So, as to why Wizards might need to spend some time in the naughty corner I want to take a look at the one area in which my sphere of Magic has some overlap.

There are two parts to the question I pose in the title. Firstly, what aspects of the MODO cubes makes them suck to play compared to other cubes and secondly, why are they like that? Let us do the first one first! I find that the MODO cube sucks because it is highly random and as such the quality of game is diminished. I could go into this rather more but I don't see much need. If you like random then that it fine but I think the best formats, be they constructed or limited ones, provide lots of options, minimize the number of games decided by screw and flood, and have close games where the choices made determine the outcome most often. That is pretty much the basis by which I build my cube these days. Good cards are those that achieve those ends. I will say, in an attempt to do a bit of a good news sandwich, that card design has been very impressive in that regard over the last couple of years. We have had loads of great new tools that do exactly what is required to improve cube if nothing else.

I used to think that the online cube sucked because Wizards were bad at designing cubes and that might still be the case but it feels wildly unlikely for several reasons. Firstly, they have all the data and resources at their disposal. The average cube on CubeTutor is significantly better than the usual MODO offerings and that hasn't even been designed. Wizards then have all the data from their many years of online cube which is amazing. They could have the perfect cube by now if they used that information properly. The jump in quality of card design over the recent years also displays a solid understanding of the game from Wizards and makes it more unlikely they are incapable of making a good online cube format. The other tell is that the MODO cube started to get better each new release from when they first introduced it and then it started to get worse again.

It could just be that they don't care at all and just throw any old garbage up without a second thought. That is more likely than incompetence but still pretty unlikely. Magic is big business and any potential source of revenue will be scrutinized and optimized. As such, it is time to don our cynical cap and think about why the online cube could be intentionally down graded. There are several potential reasons, it could be just for one or it could be for a mix of them. The reason that MODO cube is only available part of the time is also likely linked in to the explanation for why it is potentially intentionally designed to be more random that it could be. So what are these potential reasons?

First up we have the danger! This is one of the least likely reasons but it marries up very well with my perspective on things and that is that cube is clearly the best format you can enjoy Magic in! I am confidant cube players contribute less to the coffers than limited or any sort of constructed player and likely less than most of the casual players too. I support several Magic regulars with my cube such that they have never spent anything on the game while still getting to play regular Magic. I only really help prop up the secondary market having only bought a couple of the Commander products in a decade or so. Even my spending in the secondary market is low and would be far lower than someone drafting once a week or someone who just bought one box of new product each release. There is a small chance that Wizards simply don't want to divert players away from more profitable formats with too good of an advertisement for the more economical cube! Keep cube less good than the others, keep it like more of a comedy format for some light hearted gaming and it isn't a threat. Like I say, seems unlikely but it is good to cover all options.

Next up we have the idea of showcasing. My cube has relatively few chase cards in it compared to others. It is much more populated with cheap support cards in the one and two slot. Many of these are low power commons and uncommons that fetch little on the secondary market and likely do very little to drive product opening. If you can showcase a bunch of individually powerful cards you can potentially increase demand for such things. I wonder if some cards are simply in the cube to generate a bit of demand. Most big powerful things look good in the right situation and if they are in a cube they must be good right? Perhaps one should be in your EDH deck? Having cards that are not featuring in constructed formats in the MODO cube should help to stop the prices on such things completely tanking which is all round good for them. A nice healthy secondary market is very much in the interests of Wizards even if they generate all their revenue from the primary one. 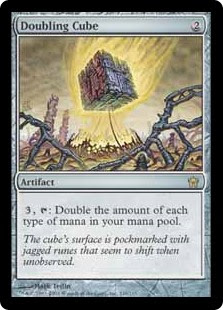 Another potential reason for a fairly random MODO cube is player base retention. The more like my cube design philosophy you go the wider the gap in win percentage gets when looking at different player skills. Cube is also pretty extreme for this compared to other formats in general, I would argue that it is the most skill intense format but again, I am somewhat biased! The MODO cube keeps the best players closer in win percentage to the rest of the field by being quite random which is likely pretty important. If you always get stomped when you cube you are not going to be so eager to play it. With player skill being a bell curve you want to appeal to the nice fat middle ground. The extreme capability for cube to differentiate between abilities means you can alienate all of your player base bar the thin top end of skill level with too consistent of a cube. Keeping it high variance ensures most people have an enjoyable experience with a realistic possibility of winning.

The really lame things about the last reason is that it is the most convincing of the three and it is the most transferable to other formats. If they do intentionally increase the  random element in the online cube format they probably do similar things to limited and standard so as to appeal to the greatest pool of players. Essentially it makes sound economic sense to not make Magic the best possible game it can be.

This is starting to sound like a conspiracy theorists rantings and ravings! Obviously there was no meeting where the big wigs gleefully plotted to worsen Magic. In any such meeting the agenda would have been framed as making the game more accessible. I must also return to my bias and my perspective. The online cube does not objectively suck, it is only I and like minded people who will think it sucks. All I can objectively say is that it has a higher degree of randomness and that for me makes it less appealing. I am sure there are plenty of people who rather like the MODO cube and would find my cube to be boring. If anything, my grievance is with the inevitable outcomes of our economic systems and not really with Wizards at all. Don't hate the player hate the game and all that.

I should also not go round throwing shade without solutions to the problem. I barely play any cube online because I find it so unsatisfying but I would if the cube was better. If it doesn't make economic sense to have a less random cube over their usual offerings then I am just out of luck. It probably also doesn't make great sense to have an expert and a beginner cube or anything like that. Such a ploy would still not satisfy everyone and might well push people away. Ques would be longer and stigma may get attached to things. A much better way to go would be to allow people to host their own events with their own designs of cube, or indeed, whatever formats and things that could be be made to work with the software. If I could log on, make a cube and play it with people, either friends or randoms then that would be amazing. I would play a lot of MODO, I would probably try and stream it. I would certainly experiment loads. Wizards have gone for the optimize a function without further investment in it line of play. I would argue that they could have invested a small amount in the functionality of MODO and reaped far greater returns and satisfied everyone. Most relevantly, they still can.

Again, this issue comes down to economic reasons as everything always seems to. Wizards are a bit of a pseudo-monopoly in several ways and are not really under enough pressure to streamline. Why invest in a risky solution when you can take a low risk, minimal investment and still do very well out of things. MODO cube is popular because cube is fun and otherwise logistically hard to arrange. Nothing comes close to the convenience of MODO for cubing and so it only needs to be a bit better than alternatives and not as good as it could be to get paying customers through the gates.

Can I offer a solution to the global economy? I would love to think so but it seems pretty unlikely all told. Even if I could this would not be the place to do so. I have however always thought that Pro Tour prizes should include some shares in Wizards. The more that you can align shareholders and players the happier everyone is going to be! I am sure there are other, and better ways to do this sort of thing too. I have not given it the deepest of thought what with it not being something I have power to exact! Certainly a far less good solution than the free-form MODO suggestion.

So, to answer the question "why do the Magic Online cubes suck?" - because money. It doesn't make Wizards bad or good. It is just how it is. It could be better but it could also be a whole lot worse. A bad MODO cube is better than none at all. I cast my vote on the matter by not spending my money to use it and that is about as much power as I have to change things.