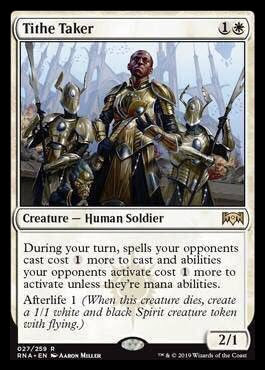 This is an upgrade on Martyr of Dust for a body combined with a mild blend of Grand Abolisher and little Thalia. For constructed play this seems like it isn't disruptive or powerful enough to be super impressive but in cube I think this will perform admirably. The more general nature of the disruption makes the card likely to be tedious to play against for a lot of decks rather than being brutal for a few and irrelevant for most. It puts the initiative on your side and reduces your opponent's options which are generally nice things. Like Thalia, it is the fact that the body is desirable on top of having some disruptive effects that will allow this to do so well in cube. If this were just a 2/1 it wouldn't offer enough punch to merit the mild disruption. This is great with both equipment and with anthem effects. Martyr was nearly good enough and Tithe Taker is better on two fairly large accounts. Flying 1/1 tokens are a huge deal in cube. I expect to see more of this than two mana Thalia going forwards. 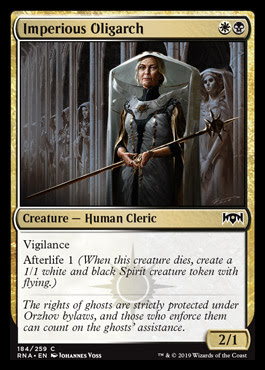 This is a bit too fair and a bit too narrow for drafting cubes. It is probably even a little bit overkill as yet another support card for constructed decks that want such things. It will see some play but in Orzhov token decks but it is far from an auto include. There are just so many options on such things now and this isn't even cheap or high powered compared to some alternatives. The best place I see this is in a tribal cleric deck where there is less support from general high powered cheaper dorks. This is actually a lot better than a Doomed Traveler as a stand alone card with both halves of the card being relevant enough to matter. That isn't overly relevant as Traveler is a synergy card, you don't ted to play it without support. Doomed will continue to see more play than this in the synergy decks for the cost. Things like Tithe Taker will keep this out of drafting cubes and so all round I expect to see very little of this. 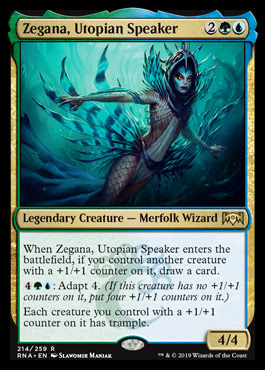 Well this is certainly very powerful. It has that golden ticket of positive abilities on an otherwise well statted creature. Absolutely this card has power but I don't really see it just because of Simic being such a dodgy colour pairing at the moment. This doesn't do anything specific other cards can't do better. Even more problematically Zegana doesn't cover any areas in which Simic struggle. If we can get a Simic card that gives them proactively powerful strategies or one that handles creatures somehow then we are looking good. Until then cards like this will continue to fall by the wayside in cube. To be honest, even if Simic were great this card is still probably a bit aimless. If I want good stats and card drawing dorks Rogue Refiner is my man. If I want trample I am looking at greedy gods, pump spells with that mode, Brawn, many other things before this, and lastly if I want some bad growing level up dork there are plenty better on offer than this 4/4 that adapts into an 8/8 for a bargain priace of 10 total mana... Power but no home and no purpose. 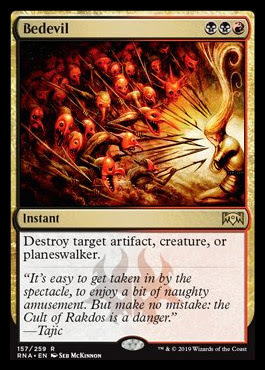 Well this is lovely but it is also going to have to fight very hard to get a slot. There is simply a lot of cards in these colours covering this range of effects and abilities. With all the black three mana Hero's Downfall cards, Dreadbore, three mana Daretti, Kolghan's Command, Terminate, Abrade and possibly others I forget or disregard! Bedevil has something on most of these cards but they also have something back on it. Bedevil is hard, instant, unconditional and hits a lovely broad three types of permanent. It is great in that regard. Where it falls down rather is that BBR cost that ties it heavily to black. Really it makes it appeal less than the 1BW removal cards which are that much easier to cast. This will see play and it will be great but I fear it will wind up being a little too narrow for my cube design preferences. I am going to give it every chance to prove itself worthy thought given that I think it would be one of the best removal card in the cube at 1BR to cast. These more reliable but heavier costed removal spells are increasingly popular in cube presently and black is increasingly one of the most played colours. My fixing is excellent as well so all told perhaps I am overly concerned about the cost. It is not like you need to play this on turn three. 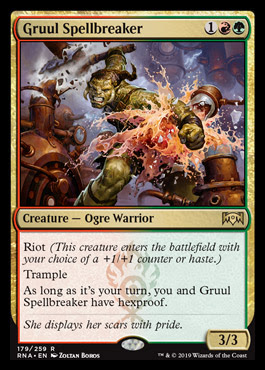 Very powerful card. Good stats and three positive abilities. This even has options going for it which is a nice rare treat on an aggressive dork. A fantastic card to equip or otherwise buff at sorcery speed. A great card to use for forcing through damage in general with the trample hexproof combo making it a good card in combination with loads of other good cards and strategies. This is about as good as it currently gets for a three drop aggressive zoo style dork but I think that is the only real place that this will shine. Outside of zoo where do you want a midcost aggressive linear dork? It is too much at the top end for an aggressive red deck, it is too low impact for a ramping deck and it offers no value or card advantage making it appeal less to midrange Jund style decks. Perhaps it is just powerful enough that some midrange builds do want it but my gut is not when you can pack cards like Tireless Tracker and Jadelight Ranger instead. So presently this seems like an auto include in Zoo but nothing else. It is also the new best thing to cascade into with Bloodbraid! Wingshards and such used to be one of the best counters to Bloodbraid and Spellbreaker shuts that sort of thing right off in addition to being premium aggressive stats and keywords. 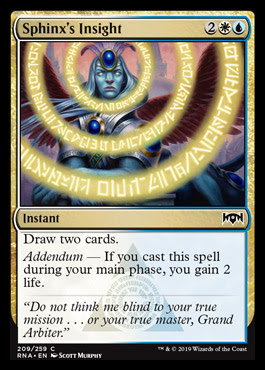 It is time for design and development to take the plunge and make a card like this three mana. This was the perfect card to do it for. It wouldn't have been good enough to make my cube, it wouldn't be more powerful than Light the Stage or Chart a Course or many other legal draw effects. I think it would be fine. This at four mana just looks bad compared to so many raw four mana card draw spells, including at least one that is standard legal. I think Chemister's Insight beats this even if we upped the life all the way to gain four. Perhaps this is intentionally bad for draft reasons and if so that I don't know enough to comment on that. At least that would mean they didn't think it had to be made this low powered. 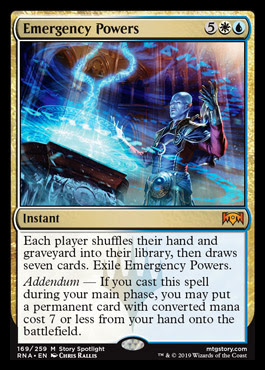 So after long consideration I don't think this has a place in cube beyond the super niche. Essentially it is a "one-of" sort of card in that you are not looking for redundancy on the effect often at all. In that light it needs to be the best at something and it just isn't. I think it has some real potential in standard, perhaps even in some wacky modern deck but cube is a little more awkward for this. Basically either Time Spiral or Sphinx's Revelation are better cards at doing what this does for you. Spiral is cheaper, less colours and gives you vastly more flexibility with your mana once finished up. You can even scale it pretty well with swathes of cards and actually generate mana with Spiral which is simply filthy behavior. The only occasion in which Emergency powers outclasses Spiral is when you have only a few manas worth of lands in play and you manage to cast something significant off the back of it such as an Elspeth, Sun's Champion. If you can cheat out casting the Powers early somehow it can set you up but in practice that seems near impossible to build into any half decent looking deck and even when possible it sounds incredibly rare and improbable. That is the addendum mode of the card. There is of course the instant mode which is just a Time Reversal for a couple more mana. That is great as big instant speed draw is what control loves, it is easily worth those two mana on Reversal when you want it in that capacity. Sadly I just don't see how that is ever better than the Revelation as earlier mentioned. You don't draw your opponents cards, you do gain life, you can use it at less than seven mana and you can scale it up with more than seven mana very nicely. Rev is safer and more versatile and frankly more on theme for that kind of thing. Hard to rule out an instant speed draw seven effect with graveyard reshuffle and extra "free" spell casts all involved but this comes fairly close! This will see some play but it will be rare and mostly for fun and experimentation rather than because it is the best thing to do. 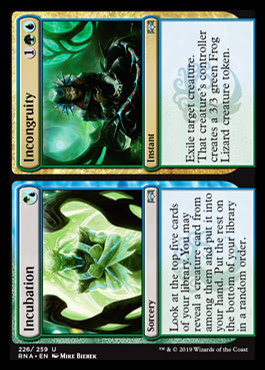 Bit of a mouthful as names go but lovely little card. This is exactly the sort of thing Simic needs to give it viable archetypes. This is playable while also solving the main issue faced by the guild. This is a three mana, instant speed, unrestricted, exiling creature removal spell. That is amazing however it doesn't come without a drawback. It is pretty much a Beast Within that trades mono colour and any target for the exile clause, which doesn't really sounds like a great trade. Beast Within sees very little play in my cube nor do any of the many other cards in that sort of vein so why I am getting excited about this? Obviously it is all about that Commune with Nature on the other side of this. It is why Cast Out is one of the most played and sought after white removal spells. A card like Beast Within or any other overpriced or significantly laden with drawback removal spell is amazing in the exceptional cases and poor in the more normal. You need to deal with that Inferno Titan right away but you really don't want to play this sort of thing on a Goblin Guide. You lose the games in which you can't remove the Inferno Titan but then you also lose the games in which you have dead cards in hand against the player with the cheap dorks. That is the fundamental issue with Simic, not that they don't have removal but that they don't have removal that is generally playable. Walking Ballista was their best card in that regard... At least now we have this to help out the little Triskellion and at least Incubation // Incongruity is not quite so contested! So yeah, this is jsut good because it has the option to help when you really need it while having a fairly useful, rarely dead, cheap card neutral mode on the other half. Simic decks should be creature heavy and so you should mostly hit and indeed mostly obtain some choice as well. Commune is an OK card in green and it is nice to now have it in blue as well. It is outstanding to have on half of Beast Within! If nothing else this should highly incentivise playing green in merfolk lists. Incubation is also near peak performance in that archetype. It might even be the first mono blue deck to run it! I think probably you just run generic blue card quality in those places but still, always nice to imagine!