Part IV will follow once I have English images for most of the cards.

Much as I didn't give love to Suspend in my reviews this similar seeming card is far more appealing. This is mass removal and it scales rather nicely. The ratio of dorks made each game to the number of turns of a game is heavily weighted to the dork side of things. This is a lot lot more removal than Paralax wave and much closer to a Wrath. It mostly just does what you need a Wrath to do. Even if the game goes on long enough for the dorks to all come back you have likely bought yourself enough time to be able to handle that. White might now have enough decent mass removal to not need this little tool. There is a lot of value to a three mana board clear so I will be giving this a test. It also has the added perk of handling everything no fuss, it doesn't care about indesrtuctible stuff or things that trigger on death. It just neatly gets everything gone for a bit and carries on with life. 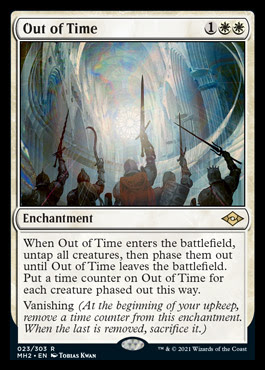 Well these certainly open the eye. While too slow for most cubes they have a decent chance in budget or artifact themed cubed. Further to that they likely have a prominent place in a variety of artifact themed builds. Entering play tapped is a big turn off but these being fixing, artifacts, and indestructible is a little too good. No risk of getting blown out. Extra consistency and extra support. Worth the cost I am sure. I feel like I would probably even play these in affinity builds to support the main colours. Not many, likely just one, but still. 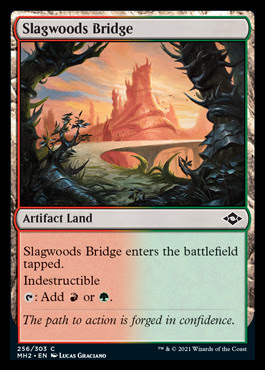 Sorcery speed Impulse card quality with Ransack the Lab yard filling qualities and a dash of lifegain. A powerful array of effects but at quite the mana cost. You likely would need all the synergies to align before this is looking playable. Too clunky for use in the more powerful formats. Nice to see more of this kind of card generally though. 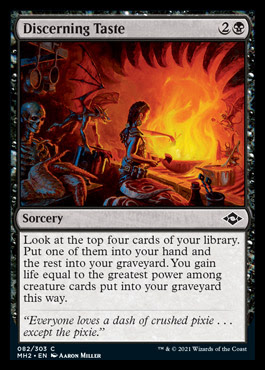 A very useful little support card that likely replaces Putrid Imp as the best discard outlet for a number of archetypes. It is more robust and more useful. I am happy playing this anywhere looking to discard. I might consider it in a  food deck too. Obviously too low power to run without high synergies. 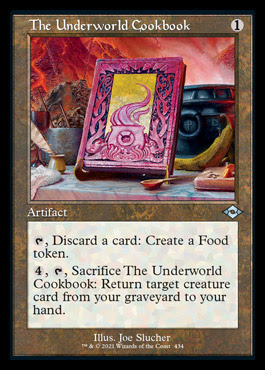 This is three cards in one. It is a zero (with As Foretold effects) or one mana 3/3 putting it in the Wild Nacatl camp of beaters. It finds you a card from your deck giving you that two for one value. Lastly Asmo is a removal tool of sorts turning any pair of food you might have into removal. This is a whole lot of card. It is easy to support but it does need it. I don't think there is near enough discard or food stuff in most cubes for this to be a wise inclusion but you could make it happen. Certainly Asmo is a good reason to be looking to make madness decks again! 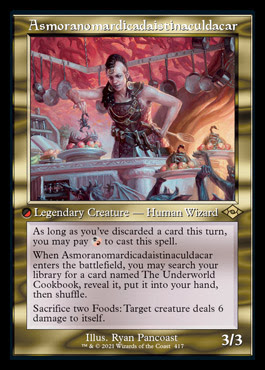 This is a fairly naughty looking card. Too narrow for cube, likely even combo cubes. As a build around however this has a lot of potential. I can see a list using a load of things like Wily Goblin that put permanents into play on the cheap. Glimpse is easy to cheat out for free and not even that slow to suspend out. If you have invested in getting permanents onto the board, likely a pile of treasure and other artifact tokens, then you can do some wild things with this. Sounds like a lot of fun! Sadly it sounds more like something you might do in modern than singleton. 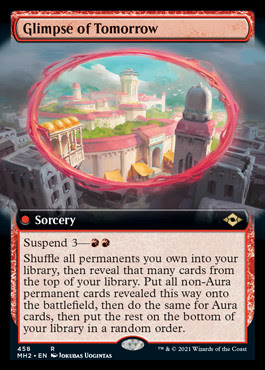 This is Search for Tomorrow in dork form. The 3 toughness is lovely, it makes this sufficiently robust that it doesn't feel like that bad of a deal compared to Birds of Paradise. This ramps, fixes, and has a relevant presence on the board. This will be better than things like Llanowar Elves in a number of decks. Anything that is heavier green and more aggressive with a good number of high tempo three drops is obviously preferring the classic Elf. A more midrange list with more relevant weight in the four and higher CMC slots however, especially a multicoloured one, is going to be rather more interested in this I suspect. Missing that one turn of mana production is going to be worth that fixing and toughness. One mana ramp cards are absolutely premium in cube. They are the defining thing that makes green good. More are always welcome. When Gilded Goose is a strong cube card then Rift Sower is a clear lock in. I wonder how many more cards of this quality before I consider cutting Boreal Druid (the weakest 1 mana ramp card I include)? Probably a long way yet, I suspect I will just allow my cube to expand in size and include more interesting cards as I get the volume of cheap cards to support them. While cards like this only ramp you to a four drop at the same speed as two mana ramp like the classic Rampant Growth there is a significant gulf in power between ones you deploy for one mana on turn one compared to doing so on turn two for two mana. The mana saving is relevant but it is more about the quality of cards and what you can do. Having two total mana is a whole lot more options and spells and power. I suspect you deploy something relevant before your third turn over three times as often when using the likes of Search for Tomorrow over Rampant Growth. The power difference will also be significantly higher on average (although not double by any means). A supremely welcome card. 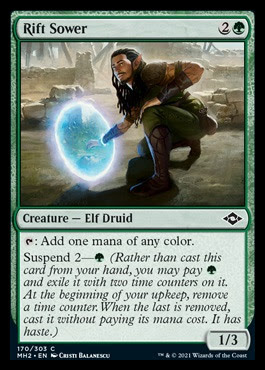 This is more of a sidegrade to Arcbound Worker than an upgrade but one drop redundancy is really nice. Having a decent chunk of cheap modular dorks and artifact dorks with counters on them lets you consistently empower synergies. Yet more cool directions to take artifact aggro decks in. Lifelink here is minor, the W cost instead of colourless is generally an overall downgrade on Worker but if you have decent white mana and are playing Worker, you also play this. 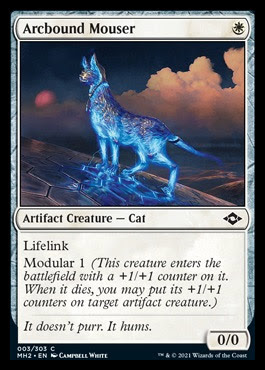 This is a tutor for wizards. Pretty useless elsewhere. You really don't want to be casting this if you can help it. Not many decks want to tutor wizards and so this will not see much play. If and when they do however the stock in this will jump significantly. 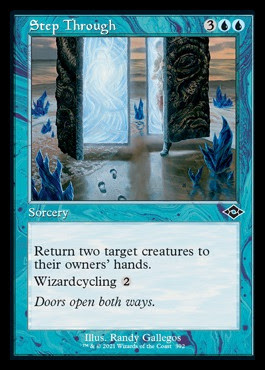 This is too narrow for drafting cubes. Just play Light up the Stage or Jeska's Will or something. When you are forced into playing this for one it is pretty shameful. It isn't looking great until you hit it for at least three. At that point it feels like you could do rather better with your storm count than playing this. 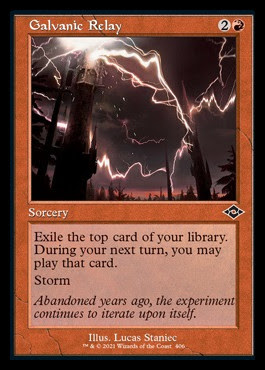 Just not efficient or quick enough at doing anything. As a 2/1 with a free sac ability to do this with no need to be over summoning sickness then maybe. Neither half of this card is good so you just play a good version of the effect you actually want, be that yard hate or a dork. 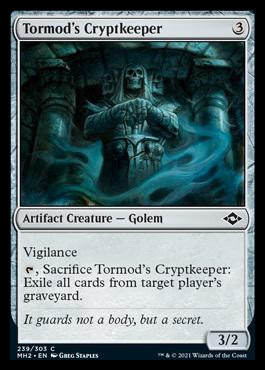 An odd card for sure. This is very playable and not without uses. A two mana cantrip with upside is the playable aspect covered. It is all down to how good those uses are. You can turn off a mana dork and use this much the same way you might Ice down a land. You can use this to get around indestructible or hexproof. It will turn off on death triggers. There are lots this does but it is generally both narrow and situational. Those kinds of cards just don't wind up in decks, there are just too many good cards fighting for slots that the aimless ones miss out. I will test this, it is different, useful, fun, and reasonably powered enough, I just cannot see it lasting. 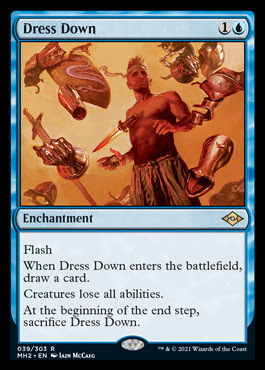 Too narrow for drafting cubes but really only just. This does some decent disruption once in play and can come out fairly easily. You really don't need many tokens in play to make this a very reasonable price and that is pretty easy to do. Imagine the horror of this with the likes of Rabblemaster or really any of those red three drop token producers. Even so, this is just a little needy and clunky to compete with cube top end threats. Certainly a card I will look to play with in some constructed build when I can. Playing this for UU is a thing I have added to my bucketlist! 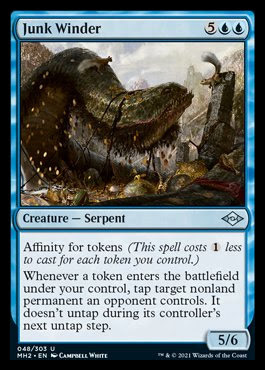 Yawgmoth's Will colour shifted and suspended. Good choices. Looking forward to seeing what I can do with this. Very much a card you need to support but then so is Yawgmoth's Will. This will feature in some powered, and most combo cubes. I doubt however it is getting close to un-powered and more conventional cubes. Suspend  four is quite a lot so you either need to lead with this and hope you get there on the turn it pops or you need to find a way to cheat it out like As Foretold. The latter is likely preferable as you cannot use this like Yawgmoth's in the middle of your main phase after cracking all your saved up Rituals, Petals, etc. That makes this new version rather harder to use but the payoff is that you will be saving three mana on your big turn which is pretty massive. You can also just use this for value of course but then it is kind of like a dodgy Ancestral Visions and is quite hard to get excited about. One thing I can't work out is why it is worded so clumsily. Why does it not just say you may play cards from your graveyard this turn? Why does is stipulate specifically lands and spells with different terms when just one will do? Would love to hear theories. 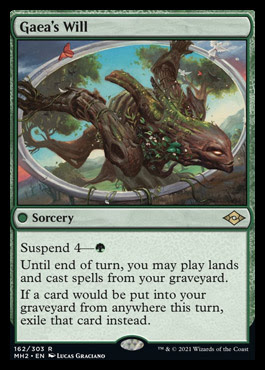