That is an overly long set name...

Very efficient little Doom Blade that scales into cube play far worse than most removal spells do. There are just quite a lot of key creatures you want dead that are angels or dragons. They are some of the more powerful must kill cards so while there are a lot less of the misses with this than when compared to black creatures as per Doom Blade it is a lot of critical misses. The sadness of looking down at this while a Glorybringer decimates you will be unrecoverable. This might be better than Doom Blade and Go for the Throat, even in cube, but it still isn't a removal card you want in cube. The quality of removal has jumped so significantly in the last few years that this just isn't getting a look in when competing with the swathes black has on offer. 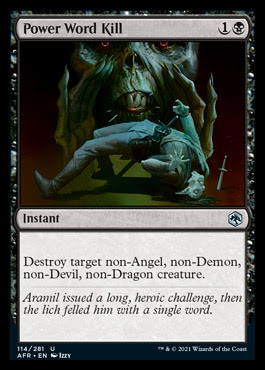 Very interesting little dork. Ongoing lifegain and a nice little bit of ramp and fixing along the way. A one hit Gilded Goose meets Soul Sister. A substantial upgrade to Wily Goblin! It might be a bit vague for a lot of cubes. The power level is quite low and the synergy is hard to match up in green. It is however very useful and will show up in a selection of places I am sure. It might well even just be good enough as is for cube drafts. Board clutter and utility at a low cost is great. If Gilded Goose is getting lots of play this has to have some shot. Two permanents in one cheap card is always nice and this does actually do quite a lot of stuff. 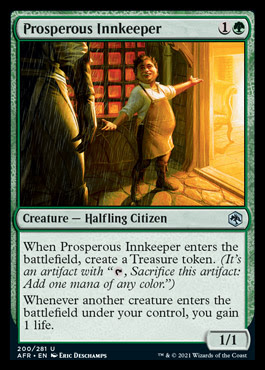 Super Niv! Too narrow to be good in a limited setting. In a constructed one it has uses but they are generally a bit over the top. This is far more of an EDH card than a cube one. You just struggle to fit this and five dragons in a 40 card deck. 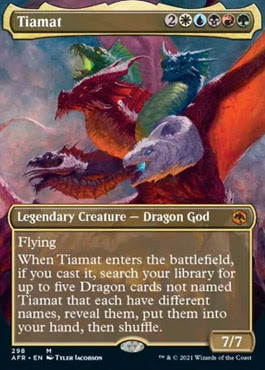 This seems pretty outstanding. It is cheap and very broad in range. I have 330 creatures, artifacts, planeswalkers, and enchantments in my cube, 140 of which cost 2 or less. I normally look for a higher hit rate on my removal cards but there are several factors at play here making me think this is still just great. A lot of the more awkward threats that evade creature removal are cheap like Jitte, Skullclamp, Search for Azcanta, Smuggler's Copter, Bitterblossom, Goblin Bombardment, Wild Growth, etc. Portable Hole gives you a nice little out to those annoyances while also being a great high tempo low cost removal spell. You are also generally trying to play a higher % of the cheaper cards on offer that you have than the pricier stuff for curve reasons. As such you see a greater portion of <3CMC cards than their % makeup of the cube suggests.

Portable Hole is to Fatal Push what Banishing Light is to Murder. And given how playable Banishing Light is, how terrible Murder is, and how strong Push is I think we can presume Portable Hole is going to be a big win. It is everything I wanted Isolate to be. The high utility and low cost will make it a really tempting offer for both control decks and aggressive decks alike. Because it is so low in cost you care a lot less about when it gets removed and they get their dork back. Often it will just be some Goblin Guide or other card a little past its best. Less likely to have EtB effects that are damaging. Indeed the cost of Portable Hole is so low I can see it often being used just to wipe out a token dork. When used to do that you suddenly have a massive asset in play rather than a liability. It ups your metalcraft, your devotion, city's blessing etc. It also makes those flicker effects extra nice. I go on and on about the value of exile but it continues to rise. Sure, you can wipe out a Bloodghast or an Adanto Vanguard properly but that is just a part of it. It is actually super relevant removing targets from Raise Dead effects, fuel for delve and escape, Deathrite Shaman and Scavenging Ooze. Keeping the bin empty keeps opponents options and resources low. Doing so with cheap versatile early removal is a big win. Not being a D&D player however the one thing I dislike about this card is the unshakeable notion of this sounding like a sex toy. 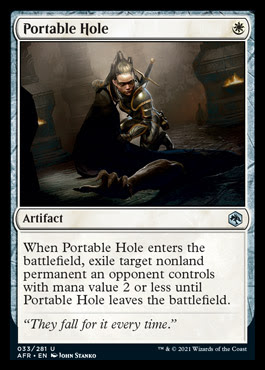 Lewis Carroll getting in on the MtG action now! Sweepstakes on when we see a Jabberwock? This is a powerful card but a touch on the narrow side. Broadly it is a black only Bonesplitter that gives deathtouch at the cost of an extra mana to equip. That is pretty fair. It makes this quite the threat ensuring you are doing damage or trading in combat, likely trading up. Deathtouch and power don't scale brilliantly together but both are still good things to have. The 8 mana mode will not often come up and mostly when it does it will be forcing issues rather than actually winning the game. This is a solid and potent bit of equipment that is just a little clunky and narrow to break through into cube play. I think too often this would be outperformed by Bonesplitter which as the less playable card is not the place to be. 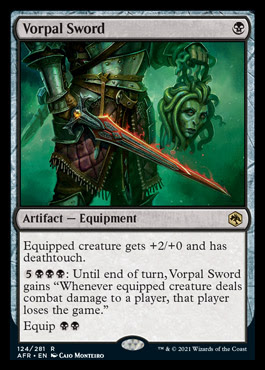