A middleman of reanimation like Karmic Guide. This is weaker than Guide although more suited in colour terms. Given that Karmic Guide sees almost no cube play anymore these days I don't expect to be seeing much of this guy. Not bad just not exciting or needed. Perhaps useful in conjunction with things that recur specifically cards with low power. 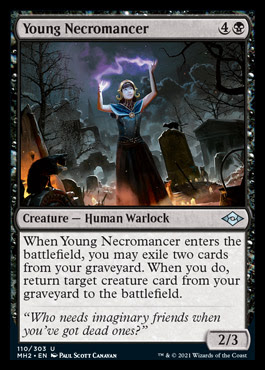 Cute but very slow. A bit of a wall and a bit of pump. You only play this with a significant +1/+1 counters theme and even then it likely needs to be a colourless list otherwise you just have more powerful options. 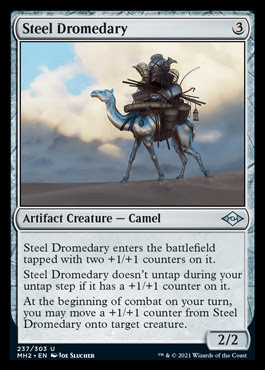 Cool card. Very EDH. Not sure this has a place in 1v1 and if it does it is all about the combo abuses and not the playing with it fairly. The power is there on this one but failing the removal test on top of being all the colours rather ruins it. 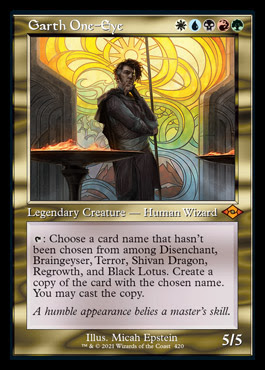 This seems like an upgrade to Daretti, Ingenious Iconoclast which is a very strong cube walker. Top ten for sure, quite possibly top five. As such I suspect Grist will be a top five kind of planeswalker. Not only is he more potent than Daretti he is also far more likely to pop out on turn two thanks to being green which is extra scary. Grist is also far more easily recurred than other walkers thanks to his passive meaning removal is often a temporary answer. Grist either churns out 1/1 tokens or he casts Bone Shards for you! Sac a dork on the -2 is a cost but the +1 supports it nicely as do the colours you are in and the general look of the meta in most cubes! It is generally easier to support as your first activation than sacrificing an artifact too. The +1 is great even assuming you never hit an insect which is fairly reasonable to assume in cube! At least presently. A three mana walker that grows while developing the board is huge. These insects can attack too which is massive. No other three walker can grow while making things that usefully attack. Oko obviously can but at least that is two activation to make a food then Elk it. And Oko is so damn stupid that comparisons to him are fairly pointless. Not only does Grist's +1 make dorks but it also mills which is amazing these days. Between things that recur and things that use generic stuff in the bin as fuel there is a lot of value to self milling. Even the ultimate is pretty neat. It works with the +1, is easy to get to, and scales pretty well as the game goes on. Grist just does all the things in a very cheap and convenient way. Great answer, good development and a threat at all times, all for a bargain of a price. 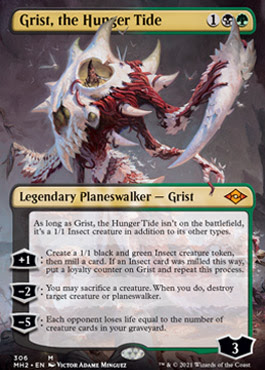 This seems pretty strong. It is a cheap Reanimation effect that has some counterplay to it. It is a bit of an Unburial Rites that permits disruption to reduce mana cost. It will be pretty easy to make a fatty with this on turn three, and for only two mana in addition to the costs of getting your fatty in the bin. Priest is also good enough to play just normally, you don't need to be putting Griselbrand in the bin or anything. Just getting back something you want more than a Bear and three life. The unearth adds real value and utility allowing you to mill or discard this and still get use out of it. It might be a bit aimless early in the game without combo support in my cube on top of being a bit gold. It is certainly a bit slow for the likes of legacy Reanimator, probably modern too. Combo cubes are the best place for this I think. Worth a test for sure. 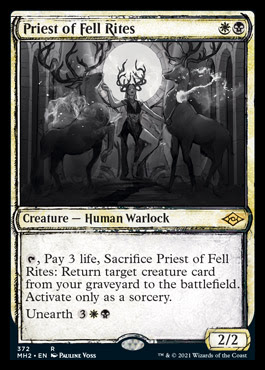 Lots of stats if you storm it out. If this is the fourth thing you do then you get a 5/5 Aeve and a 4/4, 3/3, and a 2/2 Ooze token. It scales up pretty fast from that point. But big deal. I can get bodies and/or stats far easier. There isn't much exciting about this card. It is a bit more efficient than Empty the Warrens but it is a more awkward colour for such things and still needs you to give stuff haste in order for it to be a good win condition. In the range where this is good and Empty the Warrens isn't you have cards that don't need to be stormed. Beyond that you just have actual good storm win conditions. The floor on this is also quite comic. Worse than Grey Ogre by some margin is a whoopsie. 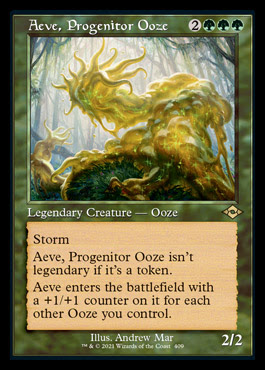 Great little card when you have the discard outlets. Rubbish if not, and thus this is very much a build around card. And a somewhat fair one at that. Luckily in the places you play it you will be able to consider it much the same way you would consider a one drop threat even if you rarely play it turn one. This lowers the bar sufficiently to make this actually quite a strong boon for a madness build. 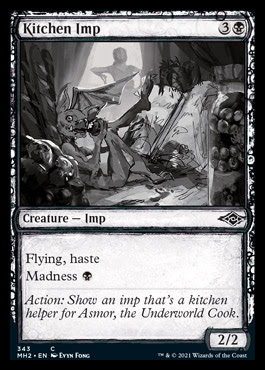 Super Arcbound Worker. While this too is a build around card Zabaz has a lot better prospects than Kitchen Imp! Artifact aggro is a much stronger archetype than madness and Zabaz has a much more assured spot in such places. I suspect I will play this in almost every deck in which I also play Arcbound Ravager from here on in. By itself a great little utility and support one drop that is option rich and decently powered. In concert with the right cards it occasionally just gets out of hand. 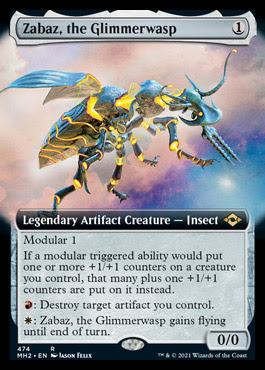 Can be quite brutal but mostly is unreliable, situational, and narrow. Best case this ruins someone who got keen with a burn spell or a Vindicate. The norm will be having this sat in hand doing nothing. 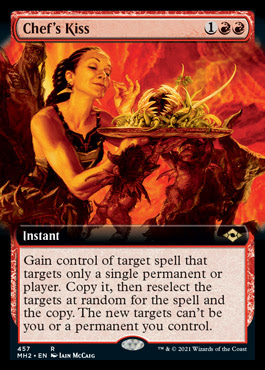 This is a tempo card far more than it is a counterspell. It isn't even a Memory Lapse as the opponent can stick the thing on the bottom if they wish. Lapse is very much at it's best when you put something back that is no longer a good draw. Memory Lapse the counterspell targetting my Teferi Time Raveler for example. This answers nothing, just delays. What this card does is trade your card resources for the opponent's mana and this is a mighty fine trade to be able to do in blue. You go 2 for 1 on cards and X for 0 on mana when evoked. This means you pay a card for X mana which is essentially what Force of Will does that makes it so strong. Given Black Lotus is trading a card for 3 mana you don't need to be hitting that big for this to be very powerful. Hit a three drop and get to convert the worst blue card in your hand into a Black Lotus? Sounds good. That is likely near the floor of the card too. Cube is a higher CMC format than modern by a decent chunk and so this will typically be more brutal in cube.

Most threats get hit by this which allows blue to safely make a play and generally not risk losing as a result. You might well get your play answered if it is a planeswalker or some kind of threat of your own but you are unlikely to have them sneak out a card that ultimately just beats you. This means you either pull ahead a lot of stay even. The kind of play where you make a walker and then they kill it with a haste fatty is just devastating and usually loses you the game. This is the perfect situation for Subtlety to shine. Flop out your Jace, they try and kill it with some dragon or whatnot and you put the dragon back on top and win with your planeswalker to nothing board and turn in hand. This is also a total beast when you play it as a four drop. You get a relevant body, you go two for one in cards and likely around one for one in mana too. You blank their turn while progressing your own. That is pretty cheating. This card offers you the option to play quite proactive magic as blue. It is high tempo or value and tempo. It is versatile and well suited and oh so powerful. This is an easy 9 while Grist was a close 9 by comparison. It may transpire in testing that this is a 9.5 card given how I expect it to over perform in cube compared to other formats. Yes, Force of Will is better as a pitch card. This however is still great when you hard cast it while also flipping from a pure tempo card to one that is also value. Imagine if Force of Will was actually Dismiss when you didn't pitch cost cast it! That is easily enough to break this for cube. I am braced for this to be oppressive. 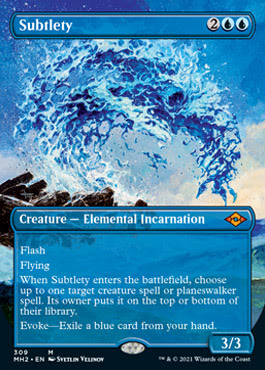 None of the scaling or versatility of Walking Ballista but this is rather better at the most commonly used cost of two. You get more stats and you get to ping without losing the body as well. This is a very tidy early play with ok tempo and high option density. Yes, it is weak late but it is not the worst. It still scales nicely with +1/+1 counter stuff. I think this has a shot in cube, just a nice little support card. Feels like green will love it. It is low power but just the kind of thing a number of decks are looking for. 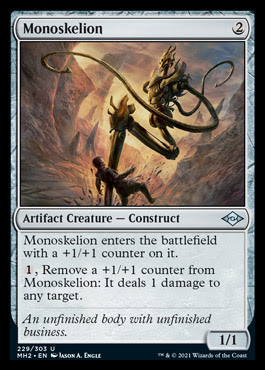 Choo Choo! Half an Empty the Warrens and as such a very reasonable card. You can play this in a lot of normal places and have it be fine. At two tokens it is likely great for any tribal deck. At three it is great period. A little needy and unsupported for most cubes but a useful tool to keep in mind. A card that will certainly see play in multiple places. Presently no cubes really support this kind of thing but having this kind of thing is certainly how change can start to happen! I would love to have a green take on a go wide cheap tokens plan that is both viable and consistent enough for a draft cube. Dust off my Sproutswarms and Cryptolith Rites! 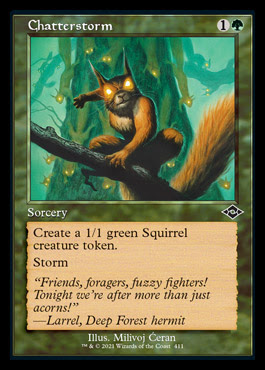 This is a squirrel card that probably doesn't go in the tribal lists as they will be green based and even if they have black mana they will not have much in the way of devotion. This smacks more of some kind of mono black aristocrats card. Likely too costly to ever see 1v1 play but some serious scaling power here for sure. Black isn't great at tokens but this dude can be. 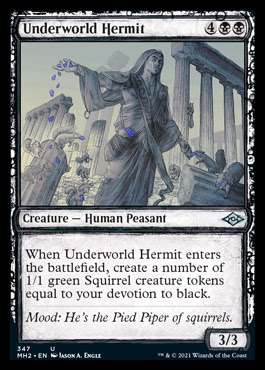