These have been great thus far and sit roughly at the power level of pain lands in cube, which is to say above all other pure fixing lands except sac, shock and original duals. Certainly there are decks that prefer a quick land but on average these perform better. Horizon lands and most of the dual manlands are also better too but they are good for utility reasons. I advocate for great fixing and so I think most cubes at 540 size or bigger should look to include these but if 70ish (including the Triomes) lands is too much then I guess these are going to among the first cuts. Rounding out the cycle will be most welcome in my cube. 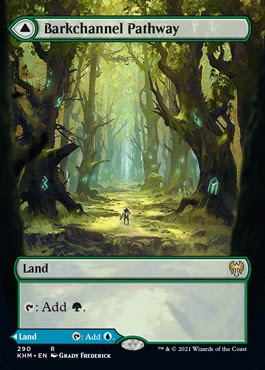 Showdown of the Skalds 6

This is very powerful indeed. It is comparable to Escape to the Wilds which was apparently ban worthy as far as standard goes! Much as Showdown is arguably better than Escape I doubt it makes many cubes as it is narrow being gold and really only suitable for Boros aggro. It is not that desirable as far as what it offers at that point on the curve. Four drops and up tend to want to be threatening. Sure, this is more value more quickly and safely than planeswalkers but it isn't a game winning card. You can only play so many four drops and so the ones you do play you typically want to get a lot out of. Probably this is like a land or two and a couple of small dorks. That isn't punching through and winning the game in the way that a planeswalker or an Assemble the Legion or an Aurelia the Warleader is able to. Red has plenty of card advantage four drops that are more playable and appropriate even if they are not exactly more powerful. I do very much like the idea of flickering Showdown and getting repeat draws and counters however. Certainly a card I will build with but not one for drafting with. 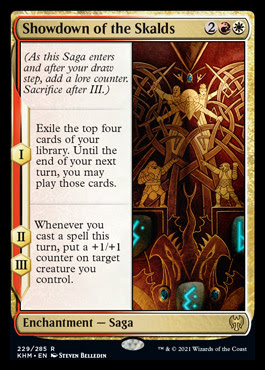 Tribal Birthing Pod. Much as Pod is very potent it is also very narrow even without any sort of type restriction. It is just super hard to build, let alone draft, a 40 card deck with a smooth curve of targets such that your Pod gives options or even just functions across your curve. This adds type to the mix massively increasing how narrow it is. There will be some tribal decks where this is a great addition. Tribal cubes may even be able to make this work but most normal cubes should avoid including this. Absolutely a card heavily rooted in the constructed world. Interesting, fun, and powerful but not a limited card. 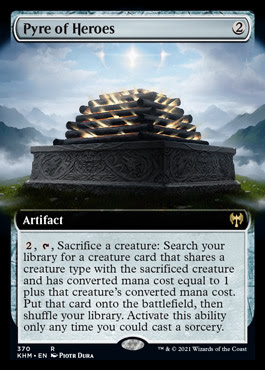 To call this pushed would be an understatement. This is a lord so powerful I would strongly consider it for cube inclusion despite a real lack of other dwarves. Presently I have 3 dwarf cards in my cube including changelings. Magda will not be pumping or extracting treasure from other dorks often at all. What she will be doing is creating cheap treasure herself with relative ease. Captain Lannery Storm was nearly good enough for cube and Magda does most of what she did but better. Magda doesn't need to attack to create treasure, she can crew or find some other way to get tapped down. She is also a two drop meaning her potential ramp is that much more meaningful being able to speed out a four drop. Just a 2/1 for two that makes treasure when tapped is quite possibly good enough for cube. Add to that the ability to tutor a dragon or artifact of your choice into play and she jumps up in the excitement as well. Sure, this won't happen often at all but it is game breaking when it does and not at all out of the question. Magda makes other dwarf cards, things that can tap down your dorks (Springleaf Drum, Opposition, vehicles etc), and other treasure producers all significantly better. She also obviously singlehandedly turns dwarf from a meme tribe into a potentially serious one. 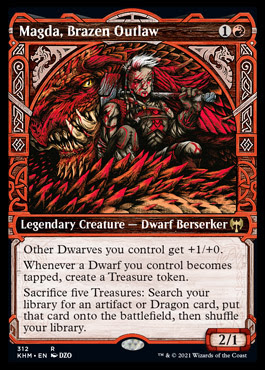 Vizier of the Managerie was surprisingly underwhelming and this looks like it will be much the same. Certainly a three drop is better than a four drop with is kind of effect however limiting it to just one type of dork guts the potency of this effect and pretty much limits it to a tribal tool. The changeling aspect of Realmwalker is interesting and increases the potential applications for this card but not really in any sort of draft or limited setting. Ultimately this is a low threat dork with little impact on the board with low, slow, and unreliable value returns. Even if you are lucky and see a couple of dorks of the chosen type you have your hand forced into playing them if you want that value which is often not the optimal line. A good elf card but not many other archetypes jump out as a home for this one. 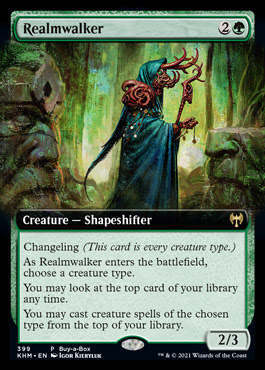 This is a very solid planeswalker indeed that I would rate comparably to Ashiok, Nightmare Muse. Kaya is very powerful when there is stuff going on but does suffer more compared to other walkers when there is a clear board. The -3 is obviously exceptional and a big part of the draw to this card. She is just a good answer to most things. Lots of five mana walkers can answer stuff pretty well but either not all stuff or not so effectively or permanently. The ultimate is cute too and encourages you to use it as soon as you hit seven loyalty so that you can replay her for free in your next upkeep. With just Kaya to recur it is decent and will win in the long run but you should be able to find some other legends to recur or cheat out and win with in a comparable time frame to most other decent walker ultimates. The +1 is most unusual and while good it is not always useful and has no direct effect on board or to card advantage immediately. It is still quite versatile being a means to protect against removal, a way to generate tokens for sac outlet fuelling, or indeed to prevent your opponent flickering things in and out for value. It looks as if you always get the token regardless of who controls the ghostform counter target. While not always useful it does have a reasonably high ceiling for a +1 ability. Lots of cube dorks have EtB effects and cost relatively little mana and so giving the ghostform treatment might well make you want the thing to die. This in turn could act as a way of forcing through some damage. You could block my Thraben Inspector would rather take the hit than give a 1/1 flier and another clue etc. It is also noteworthy that presently the options on black or white walkers in the five slot is not all that impressive or deep and that pushes this Kaya a little. Still, mostly you are playing this as a removal spell and black and white really do not lack in that department. The competition for this card is more like Anguished Unmaking, Elspeth Conquers Death and The Eldest Reborn than it is other walkers. The other Kaya options are also a little more interesting than this and so it might be tough finding room to fit this one in on top of the many juicy Orzhov offerings. 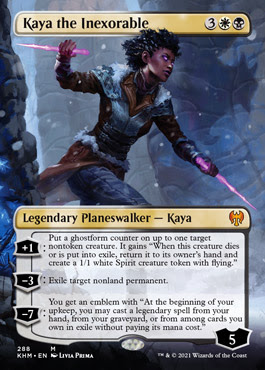 Halvar, God of Battle // Sword of the Realms 6

Halvar doesn't seem very godlike to me but then apparently Norse mythology suggests that gods are not immortal and gain much of their power through their weapons. Halvar himself is pretty weak. A 4/4 for four with no protection or evasion or anything much going on baseline. He fails a Doom Blade test hard and is not able to tangle all that effectively in combat. If he comes down and gives something you have in play already doublestrike then he is rather better but that is going to be fairly rare in cube. The moving about of buffs is also pretty narrow, you cannot really cheap on equip costs as you need them to already be equipped to qualify. 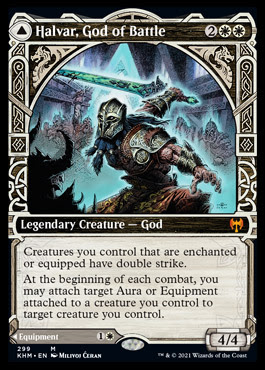 Sword of the Realms is more interesting as far as cube goes. It makes things significantly more threatening and a pain to try and ignore with the vigilance. It is very slow and grindy being an equip to start with and having a fairly hefty cost for the buff it offers. It should win eventually but it certainly isn't in the same league as other cube equipment as far as power, tempo, value, or threat goes. 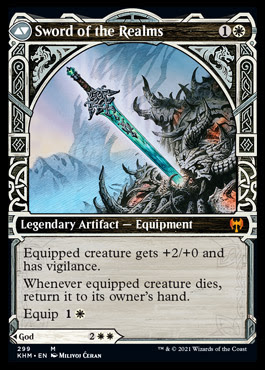 I wouldn't play either of these cards in cube on their own but wrapped up together in this nice convenient MDFC package I am a lot more tempted. A card that buffs dorks when you have them or is a dork when you don't is a good place to be. White aggro decks want both those things and does not have much in the way of selection to ensure the right mix. I will certainly be testing this out quite extensively. I imagine he will do OK in cube and perform acceptably but ultimately need cutting for more playable and powerful cards. Occasionally his high ceiling will come into play and make him look good but this will just distract from his rather mediocre average performance. Really he is pretty narrow as you are only playing him in aggro white decks and they have plenty of more streamlined options, typically in planeswalker form. Halvar will shine in equipment themed decks where his ceiling will be hit far more often and he will allow you to load up on equipment for things like Puresteel Paladin without overdoing it on equipment cards that do nothing when you have no dorks in play. Halvar is certainly more punchy and exciting than Ancestral Blade... 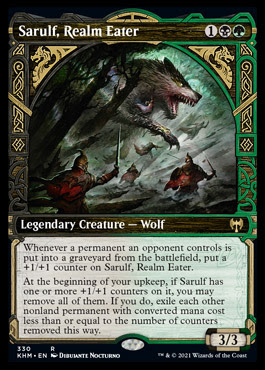 What an odd little card. Too fiddly, aimless and gold for the cube is my bet but there is a lot of potential power and synergy on offer. If you can manipulate counters in some way you have a kind of Pernicious Deed that sticks in play and gets to smash face. Too often this is just Gnarled Mass and needs a bit too much hand holding to get beyond that. Sometimes he will utterly dominate a game either as an out of control fatty or a sweeper but I don't need to test this one to know that it will not be enough.