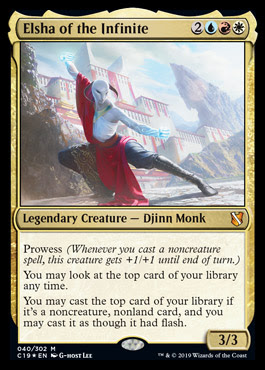 Elsha of the Infinite 2

Future Sight on legs! This is in many ways a weaker version of Narset, Enlightened Master. Certainly Elsha offers more potential value and a bigger threat but being a 5 mana 3/3 that needs further mana investment to gain value is slow and vulnerable. Narset having hexproof makes her a lot more likely to survive so as to proffer the value desired. I wont use this as a threat as it is too slow and I won't use it as value as it is too vulnerable. I might use it as a commander but I really can't presently think why I would do so over Narset. Perhaps because I am scared of Pyroclam?! There is some storm potential for this and it is both a source of value and a threat but even in commander that feels as if it is outclassed by alternative options and is going to be of a secondary win. 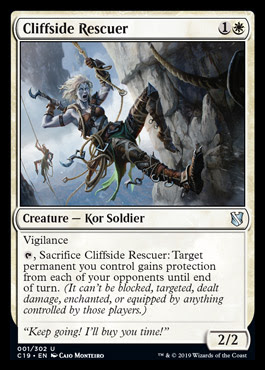 A nice little utility bear. This has the look of Bounty Agent to it which was a huge let down for cube. Luckily for Rescuer it is more general in application and doesn't need to face specific kinds of cards to be useful. While this is a useful effect it is still a bit slow which is a problem as the body is poor. Selfless Spirit can be used right away and comes with a body you can get work from. Rescuer can provide protection or evasion like a Mother of Runes but it dies in the process preventing you getting juicy two for ones. It also does nothing against mass removal which is much more the problem white decks face. As such I don't see this breaking into cube despite not being a terrible card. 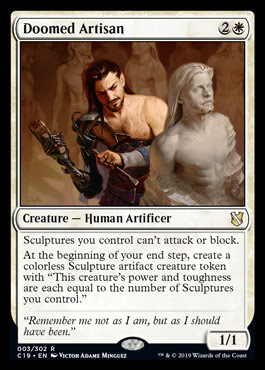 Very interesting card design. This is a token producer that makes a lot of stats. It is not unlike a Karn Scion of Urza just hitting that -2 button every turn which for a 3 mana card is pretty decent value. The two drawbacks for Artisan are that you have to kill him off before you can do all that much with the tokens and then of course you have shut off your value engine. This will lead to some very interesting choices as to when you take out the Artisan. Will three 3/3 dorks be enough or will you need four 4/4 dudes to get the job done, can you afford to wait another turn etc. So while very powerful this card is slow and needy. You need a decent way of getting the Artisan out of play and you really need to make him and wait a bunch of turns before he is value. Two end steps will be enough to be worth the cost but that still means you are waiting three turns before your investment does much of much. In a deck with heavy sac themes and outlets this is just another Ophiomancer kind of card but in a deck without it is going to be hard to make it work. It is a great source of fuel for a Skullclamp but you don't really need to empower than card any further, it is just win more at that point. Ultimately Artisan seems a little needy for how good it actually is. If it were just slow or just in need of some way to remove it from play it would be really scary but with both I think it is going to be hard to justify in most decks and cubes. Artifact synergy may carry him a little further in some synergy lists. Shutting off your own changelings probably won't stop it seeing any play at least! 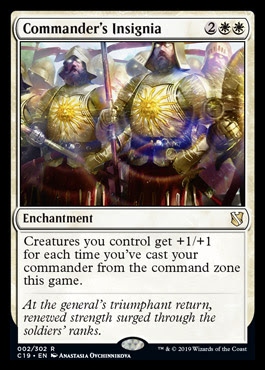 Obviously a blank for games without a command zone element to them hence the 0/10 rating. This is however a fantastic card design for commander and really needs to be praised for that. Linear aggro strategies are terrible in commander as you have so many opponents, your resources are stretched too thin. Further to that there is greatly increased life totals making a normal 1v1v1v1 game like having to kill six people with an aggro deck that would be pretty even with just one normal 20 life opponent. Aggro decks suffer the most from singleton after combo lists as is the same for deck size. In every way aggro lists are hard pushed out of commander. This is a potent enough card that aggro gets a good boost in commander. A nice cheap aggressive commander containing white is easy to cast three plus times in a game which just makes this card absolutely obscene. Not enough to bring it up to the level of other commander archetypes but a big old step in the right direction. 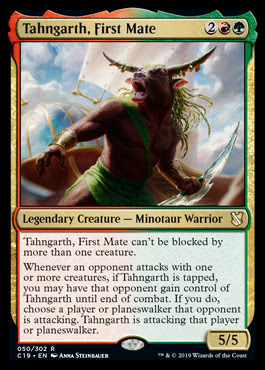 A four mana 5/5 with inverse menace is what we have here. Probably just a bad Sunder Shaman which is not a card I expect to see play. The only thing Tahngarth might help with in heads up play is if you want to lose life or have things attacked. Hornet's Nest? Seems pretty far fetched. Linear and mediocre card but a unique effect so not something you want to entirely disregard. Mild tribal potential too but only due to extreme scarcity in the tribe. 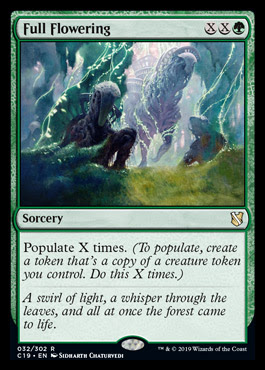 Not powerful enough, flexible enough or even playable enough. You need tokens for this to be good and really they need to be better than 3/3 tokens to be getting value for mana. A nice curve play post Advent of the Wurm for a pair of 5/5 tramplers for 5 but even that is reasonably fair sounding by cube standards. I would still just rather a Verdurous Gearhulk in most cases. 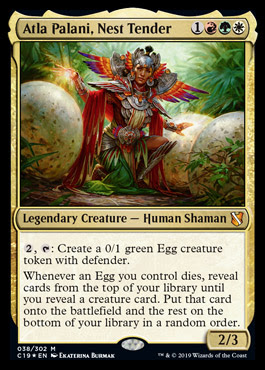 Cute design and synergies but mostly this is a 2/3 for 4 with three colours in the cost. For heads up play this is likely just a meme card. Not total garbage but certainly not super competitive either. You need to totally build around it that is for sure. It can do some cool things which is why it is fun and it can even do them right away if you are really well setup for it. Mostly however this is slow and bad. Play eggs and this will mostly find eggs. Only play fatties and your Atla is a 6 drop that needs to survive a turn or have haste and that needs a sac outlet. All too much work for the likely payoffs. 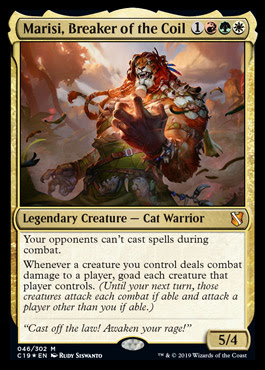 Marisi, Breaker of the Coil 0

Very unimpressive, I would not play this in heads up even as a mono coloured card. The stats are OK but you need a lot more than just stats to do well in cube this high up the curve. Really I want this to have at least haste, probably also first strike or trample or both before I am impressed at a cube standard. An OK race card but racing is the only thing Naya zoo decks are really good at... 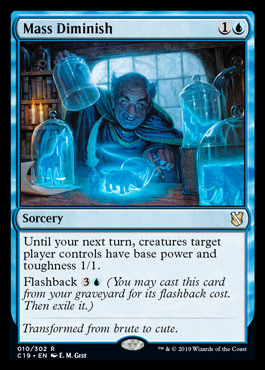 This seems good but lacks a few key elements to get there I think. It intrinsically offers no value and will often be a sub par Fog. It is conditional in that it needs a suitable board to play it into. It is hard to afford blowouts due to being sorcery. Lastly it doesn't remove abilities which are typically the scarier thing. This can have a decent ceiling but I fear the average and floor of this card are just going to be underwhelming. It is a little unreliable and for what it does it really needed to be reliable. 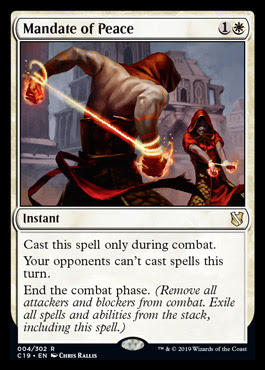 Hmm, seems like a bad Orim's Chant. You cannot stop things going down in the precombat main phase and that makes this seem like a much more of a Fog than anything else. You do get a bunch of extra pleasantries on your Fog but the same is true of all the two mana Fog cards. This is playable but I fear it sits relatively low on the pick list for Fogs or Silences and will wind up seeing minimal cube play. 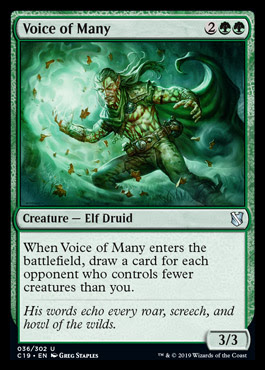 A conditional Kavu Climber is not what the doctor ordered. Very much not a heads up card. You should be able to draw two with it fairly reliably in multiplayer formats which does make it a whole load better there at least. 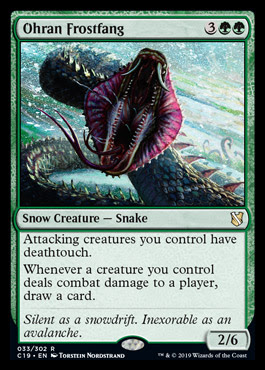 This is big and serious. Green getting an Edric/Bident effect is lovely. The addition of the deathtouch also really improves the value of chump attacking with a load of small dorks. This is like a value Overrun! Even without a board this card isn't a dud. It survives a lot of abuse and will threaten to kill blockers or draw cards over time. The issue I have with this is not power but if you want this effect on a five drop. Green can flop out one of many top tier walkers or massive dorks at five mana. Why would you want 2 power and some potential card draw when you can have endless 4/4 trampling lands, 9/9 in stats over 5 bodies, 12/12 in stats, 8/8 and trample in stats and so on and so forth. Green five drops win the game and this one does so slowly and less reliably than others. I like it and will test it but my expectation is that cube is too fast for this kind of fun now. 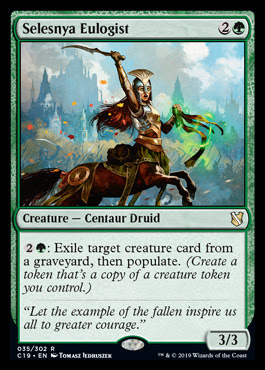 The body is too small and do nothing for the cost, the ability costs too much and needs you to have a token, ideally one worth three or more mana! I don't rate the chances of this one seeing cube action. Scavenging Ooze is vastly better as disruption and most things are better as token generation...