Not a whole lot to say about this one. It is what I expect from a commander set, well thought out cards for commander with a relatively low number of cards that will shine in heads up play as a result. I like how old mechanics like morph are being given support so that more is viable and interesting in commander. I think morph stuff is sufficiently bad that it still needs more than we got but this release takes us a lot of the way to a place where morph is viable. Really we need a 1 mana card that reduces the cost of playing a morph by 1 so you can actually curve out a morph on turn two. I like the madness stuff too but would have liked to see another Zombie Infestation quality card as a discard outlet and perhaps a couple more exciting cards with madness as well. With Anje being the commander I can appreciate why the list didn't have all that much in the way of discard outlets but it does mean the set hasn't done much to increase the power of madness in other formats.

I am pleased there are no stupid cards that are just busted for heads up play like True-Name Nemesis. Broadly the set is well designed although a few of the cards do strike me as rather good for commander! That combined with the higher EV on the reprints does rather fit in with the pushed product we are seeing in 2019. Much as powerful cards are good it is a dangerous precedent to set. Power creep is not sustainable at the present rate. The frequency of release combined with the higher quantity of note worthy cards is causing a bit of burn-out in me. 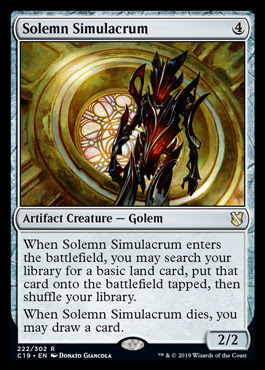 Despite the relatively low level of (1v1) playability on new cards and the high degree of narrowness among them commander 2019 has brought a lot of interesting cards and that is more what I find myself wanting these days. Most of the cards with a 3 or more rating will wind up in some quirky build around decks that are a load of fun, probably even some I have given 2/10 ratings. As for the drafting cube there are relatively few cards I plan to test and even fewer I expect to have much of a shot at lasting. Below are the seven card (best at top) I have any real hope of lasting and even then I only expect the top two to be all that strong. All the cards being at least three mana means that even if all these cards survive testing in the cube they will still not have much of an impact on the meta.