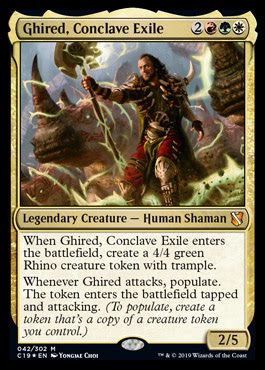 Power wise this dude is off the charts but he is gold, linear and expensive, not to mention in one of the worst colour combinations for cube as well. Being just a better version of what Naya colours already do I am not sure the raw power of this card will be enough to lure people into playing Naya more than they already do which is not very much at all. The baseline for this dude is 6/9 of stats for five mana over two bodies. That compares well with most other army in a can cards of the same cost. You can get a little more but on cards with preconditions or downsides...0 rather than the serious upside Ghired brings. If Ghired gets to attack with his rhino it is likely all over at that point. Swinging in for 10, over three big bodies, most of which tramples, is a complete beating and at that point outclasses all the other army in can cards entirely. Ghired is one of the absolute best cards in the game to haste up. He is so good to attack with that he is a legitimate card to use Sneak Attack/Through the Breach with! He is hard to deal with and will usually provide value if he is dealt with. Equally he will usually provide value if not dealt with but that matters rather less as his tempo and game ending power will rather eclipse that side of things. While probably just too narrow to merit putting in a draft cube any deck that can cast him and that can give him haste would be foolish not to run him. 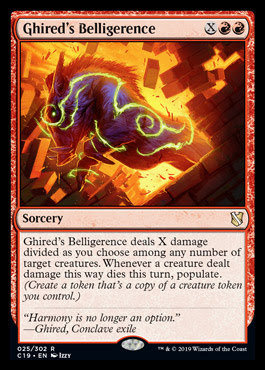 Slow, restricted, and conditional on getting decent value. Sure, if they have a couple of little dorks and you have this and a juicy big token then this will win the game in a big swingy value tempo fest. Often it will be a four mana Shock that does nothing else beyond being abysmally slow. I don't see me running this in any sort of heads up play even in a populate themed deck. The upside is win more and rare, the downsides are ever present and significant. A fun card but not a competitive one. 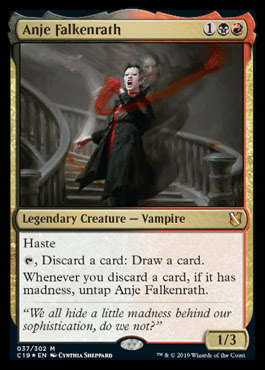 The power on this one is fairly tame but it is good at supporting a theme. Outside of a madness deck, ideally a vampire themed one, this card is just a poor gold looter. Within one she is a nice little card that will help out with consistency. This will not see loads of play nor will it ever seem all that impressive in cube. It is only really going to cut it in the more constructed settings. In singleton it does more for the building process of the archetype and adds power to the deck as a whole rather than having it as an individual card. There is also the potential to abuse the repeatable effect. In a deck with enough density of madness cards you can use this not unlike a Hermit Druid to fill up the bin or proc a load of draw or discard triggers. Glint-Horn Buccaneer and Psychosis crawler are not really the combo payoff cards you want in the eternal formats but it is still something to keep an eye on. I am sure there are better uses than those yet to be uncovered. This being limited to legacy, vintage and singleton formats makes it somewhat less likely to be a relevant combo in those metas. Having haste actually makes this quite a reasonable way to go for a combo win. It can be free value with Call to the Netherworld! Certainly an interesting card. 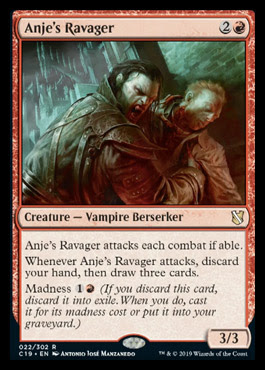 Well this is a pretty extreme card. The effect is a little too powerful for there not to be build around abuses. In singleton that won't carry this card all the way to an archetype or anything due to lack of depth. With only vintage and legacy allowing this as 4 of copies I don't see it making much of an impact there either. It reminds me of Avaricious Dragon but it is rather less risky and overall rather more potent. Any sort of super low cost deck or all in game plans will be interested in this. Obviously it is improved with other discard effects in your build. Things like convoke, vehicles and perhaps even sac outlets will all improve this dude as well letting you control things rather better. With only the all in aggro decks being able to play this at all in draft cube it feels like it is a little narrow. It is powerful but I would rather play Hazoret atop my red aggro list than this dude. Same applies to Experimental Frenzy too. I just want my big top end cards to do their thing more reliably. 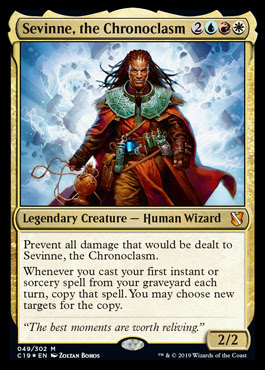 This seems like hot garbage for cube. This is a five mana, three colour, 2/2 that has no immediate effect. Damage prevention is nice but it doesn't stop destroy, exile, bounce, -X/-X effects, Edicts and I am sure there are a few more things that deal with it too. I would probably rather a Darksteel Sentinel... Forking flashback cards is cute but it is too narrow for a limited setting even disregarding the already too narrow costings. As a build around card I fear this is still too slow and vulnerable. It will beat the odd deck that is unable to deal with it but it will do so slowly and only if it wasn't coming from a position that was too far behind. There are not that many good cards with flashback effects that represent impressive value when forked for free. Firebolt is great but that is because of the front end, double Shock for 5 mana still isn't much in the way of tempo or value. There are also not enough cards with flashback in general to draft around or build into a singleton deck that looks competitive although I suspect that will change a little by the end of the spoilers. 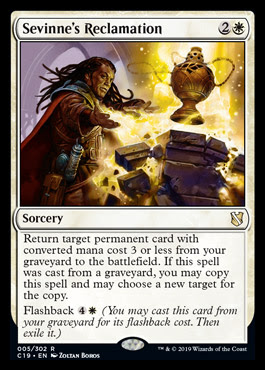 This seems really really good. For three mana you can Regrowth and replay a wide array of cards. It is recursion without a significant tempo cost. You make Brimaz, they kill Brimaz, you play this and we are back where we started except you have this in the bin ready to gain more value further down the line. It is a monster of a card when it comes to setting up combos as well. You can find Grindstone, Painter's Servant, Faithless Looting and this with a Gifts Ungiven and lock in your combo for relatively little mana and nothing else going on. I am not sure it has a place in my midrange cube but I think it has plenty of places all over the field of Magic. For my cube control decks won't have enough targets and aggro decks won't want a card that cannot be proactive just by itself. The value element is nice for the aggro decks but having a dud against a Scavenging Ooze or paying three mana for an Elite Vanguard is a no go. Five mana is also a little bit steep to get your two for zero boost in the aggro builds. If forced into playing five mana cards I want ones that close out the game rather than offering value. Still, this is a fantastic recursion card, value card, utility card, graveyard card, and combo tool. It is a Rampant Growth, a Stone Rain, a threat or whatever. It is somewhere between Collected Company and Unburial Rites. It is the Sun Titan without the crappy body bit! 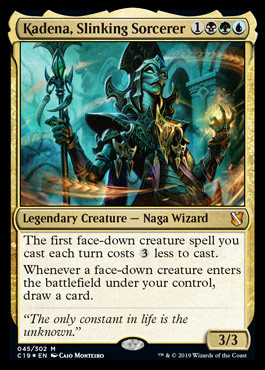 Far too gold and narrow for the drafting cubes. This is basically just a bad Hill Giant with so few morph cards being at all playable in cube. For a commander build around however this card is great. It does what you need it to so as to lessen the savage limitation of morph dorks. It opens up a whole new realm of builds and unlocks a lot of fun but bad cards into things you can sensibly play. That is great for the format and exactly the kind of design that Wizards should be looking to. When they can invigorate old and unused stuff that is a big win. This is like over 100 cards in one what with it making so many older cards viable for EDH builds. I will absolutely build some morph decks around with this, the best ones will be those using the commander rule... not a shocker given the design premise of this set. Neither will be especially great, they will hold their own but they will not be high tier. A fun card I want to build with at least which is really more important than anything else. If you reliably have a morph in hand then this is certainly strong. Four mana for 5/5 of stats over 2 bodies both of which threaten further value if not dealt with on top of the incomplete information. The threat of generating three mana and drawing a card each turn is pretty significant even if it is used on slightly weaker cards! The issue comes when you have this and no morph cards or indeed morph cards without this... 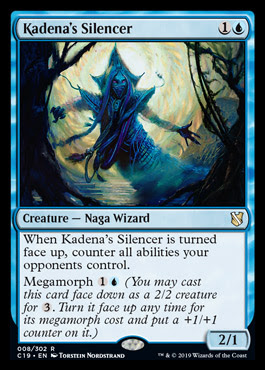 This is not very good. Five mana for a 3/2 and a mass Stifle even if you can split the costs into 3 and 2 mana respectively. This will be quite good against some combo decks and it will have uses against other cards too. The thing is that for the price you are paying even the good hits are not all that good. Stifle and the like are just far better tempo plays and things like Nimble Obstructionist are better value and utility cards. Outside of a specific combo counter I don't think this does enough to get play and that just makes it a super narrow sideboard card.