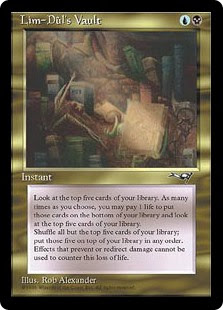 I have had this card for forever in my cube reserves. I have had it in the cube plenty and I have played with it plenty but despite this over the last ten plus years of cube this card has never impressed me until now. This is pretty confusing to me as now when I look at the card I see a top end bomb. So, why is it I am suddenly of the opinion this is one of the strongest cards in magic while six months ago I wouldn't have taken much interest in the card. Was I wrong before? Am I over excited now? Nothing much has changed in the cube meta or with other cards that have suddenly specifically made this card more than what it once was. It is all down to me, my bias and my evaluations.

There were several bias failing me for evaluating this card. Some initial ones which I have since shaken off such as it being a gold card and having things that are better at its job already. Basically a long time ago I decided this was a fiddly convoluted gold spell for which better alternatives existed and as such never really revisited it. I have gotten far better at appreciating card quality and evaluating cards over the last five years of doing this blog. The thing is that I need to be thinking about cards and ideally using them to be evaluating them. I haven't with Lim-Dul's Vault and so my old evaluations of the card are the ones I believe. What has happened here is much like a TV program or a song that you liked when you were younger and haven't seen or heard in ages. When you actually do see/hear it again you suddenly realise your tastes have changed and you don't like it any more. With the Vault I thought it was weak and believed that was a valid assessment of the card despite being wildly out of date. There was nothing sudden about the changes in my appreciation for card quality, that was a gradual and steady progression. It is only apparent how significant of a change it is when I come to use a card like this again some years down the line. 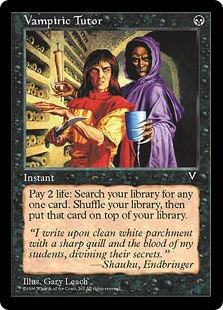 Simply put, I was blown away by how potent Lim-Dul's Vault is. Just in shock that I could have ignored such a bomb for so long. On paper it does look worse than Vampiric or Demonic Tutor. You have to pay life, you lose card advantage and it is two colours and two mana. That is only part of the story however. While there are loads of two mana tutors that will get you a wide array of things without costing you life or card disadvantage other than Demonic Tutor, (Burning Wish, Eldamri's Call, Merchant's Scroll etc) none of them find any card. Only really black has tutors that find anything and of those there are only a handful that cost less than three. Often they have awkward hoops to jump through as well or just massive risks going on. Just being a two mana Vampiric Tutor is enough to be cube worthy and Lim-Dul's Vault is that.


Lim-Dul's Vault is to Vampiric Tutor what Lightning Helix is to Lightning Bolt. Good enough as a 3 point burn spell to be cube worthy and with some bonus value bolted on. Lim-Dul's Vault is pretty much Vampiric Tutor with Index bolted on. Now, both Index and Healing Salve are not good cards but that is because it is not worth losing a card for the effects. Throw "draw a card" onto either of those weak one mana spells and you have a really good spell. That is basically why Lightning Helix is good, it is a Healing Salve with "draw a card" on it, it just so happens that you always draw and play a Lightning Bolt.

Sage Owl isn't greatly playable because you don't wan't a Flying Man so the fact that you can get that Index plus draw a card feel is less exciting. You need to actively want one part of the card for the free bonus to kick in and be good. Vampiric Tutor is something a lot of people and archetypes want, much much more so than Flying Man. Due to the tutor being a thing you want the affect is that the Index portion of the card gains that free feeling. 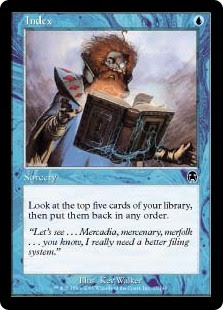 At this point I should probably qualify my overly direct comparison with Vault and Vampiric. The latter is only ever two life. The Vault can be anywhere between zero and six life in cube. Although that range seems big I suspect the average life paid with Vault is lower than with Vampiric. It is only when you have a decent library size left and you need a specific single card and that card is right at the bottom that you might have to pay a bunch of life. If it is that urgent that early, odds on your are going to win or not lose as a result of it. For just two life the Vault offers just shy of four times the dig that Impulse offers for the same mana. It is both a hard tutor if you want or just an incredibly potent card quality effect and this is purely looking at the Vampiric Tutor aspect of the card!

So, how good is Index? More relevantly, how good is it off the back of a Vampiric Tutor? A whole boat load better than a Healing Salve, I can say that for sure. It turns out Index is really juicy it is just not something often found bolted on to a card you actually otherwise want to play. Index with draw a card added on would be one of the best card quality spells in cube. In terms of the options given per card or per mana Index it is one of the largest in all of magic. Five is a lot of cards and should give a decent spread of things, say a big thing, a small thing, some lands and the thing you specifically wanted. Being able to order these as you want adds a surprising amount of value. Index is a thing that actively works with a tutor effect and so both in concert yields an overall better effect.

You can use Vault profitably basically any time you have spare mana. You might ultimately want a six drop for the matchup but using a Vampiric Tutor to do so on turn two seems bad. Vault however can find it, leave it waiting in your deck till you can actually use it and still improve the quality of the turns in between. Alternatively Vault can go find a card you want and hopefully one or two others and then, like Brainstorm, use a shuffle effect to get shot of the unwanted cards. 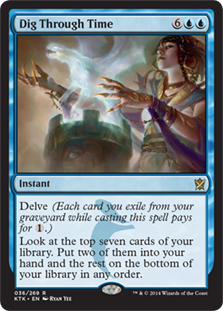 A lot of combo style decks have a good degree of redundancy. A reanimate deck will have ideally at least four of each; recursion effects, good recursion targets, and ways to get those things in the graveyard. Often you are in a situation where you need two different effects and a conventional tutor is little help and will just sit in hand until you draw one of either kind you need first. With Vault you can reasonably expect to find a five card section of your deck that has both the required effects. The ability to be a double tutor is a pretty big deal. Another issue a lot of combo decks have is needing a non-combo card to be able to go off. This could be something like a Duress to bypass conters or it could simply be a land so as to have enough mana. Again, this allows Vault to be a double tutor fairly reliably. It does again, rely on you having some degree of redundancy in your deck. You cannot hope to hit a specific pair of cards with your Vault and should only attempt to do so if you have no other outs. I have found I was using the Vault to find two specific kinds of cards a lot even outside of combo decks. Finding a generic artifact plus an untapped land plus some action was a thing I did while having new Daretti in play. Basically, I think the card quality on top of the tutor effect makes this very playable in almost any kind of deck, not just combo ones.

There are some cool things going on with Vault which warms me to the card as well. If for some reason you have infinite life and your library does not have a number of cards in it that is evenly divisible by five then you can tutor up any five cards from your deck! Not sure why you need five specific cards to win when you already have infinite life but still. Pretty cool. Also, in all the various debates about which are the hardest magic cards to play I can only think that obscurity is what keeps this out of the top slots. In every way imaginable this is the hardest magic card in the whole game. It has far far more choices and options going on. I did a top ten hardest cards list draft a while back and a selection of the top cards included Brainstorm, Gifts Ungiven, Divining Top, Vampiric Tutor and simply put, Lim-Dul's Vault crushes all of those for complexity. It has pretty much all the different difficulties and things going on as all those other cards but rolled into one incredibly cheap card. One could debate long and hard between this and Gifts Ungiven, the commonly viewed most difficult card, as to which is tougher but as of recently I am very much in the Lim-Dul's Vault camp.
Posted by Nick Nobody at 07:10