According to Leon the knife is the last tool the assassin learns to use. Gitaxian Probe is Magic's knife. You only really get enough value from Gitaxian Probe when you really know what you are doing for it to be good. For such a simple card it has so much going on. Despite being zero tempo impact and low power I rate the card as one of the best in the game. You can literally play it anywhere. Further to this it is rarely actually bad when you do play it in the weakest places for it.

Gitaxian Probe is quite a hard card to pick and prioritise as it is such a low impact card. You have to be pretty sure you have all the tools you need for your deck or will be able to easily get them. It is also really hard to evaluate in terms of what exactly it will do for your deck. Gitaxian Probe has three main things about it that make it good; information, synergy and quality. Within each of these categories there is a myriad of things going on and understanding them helps a great deal in working out the value of your card. 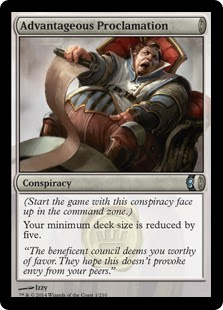 Quality is the smallest group of the three. Being a card that costs neither a card nor mana when you play it you are effectively able to run a smaller deck. A smaller deck means better odds on hitting specific things you want and better average power level (assuming you correctly replaced the weakest card with the Probe). Now I often find I run 41 card decks in cube, by often I mean a couple of % of the time. Not all decks benefit from size reduction, those with lots of dig that are trying to answer things often struggle to fit all the tools they need in. The decks that do benefit from size reduction are those that are either really redundant or those that are very specific. Basically RDW or combo decks respectively.

Red deck wins wants a Gitaxian Probe because despite being a very redundant deck there is still a reasonably steep power gradient in its playables. Cutting the weakest card affects nothing and adding in a free cycle card means you are 2.5% more likely to see the more powerful cards in your list. The optimal RDW list would be mostly Lightning Bolts and Swiftspears if it could be and playing Probe helps get closer to this. For the combo decks you are trying to find a couple of very specific cards and most of the rest of the deck is filler that is generally less effective than the Probe at getting you to those things. An Impulse will be far better at finding a specific thing you might need but it always costs two mana which means regardless of how much you increase the consistency of your combo with it you will necessarily be hurting the speed of your combo.

There is also some risk associated with relying on cheap card draw spells to thin your deck most notably in mulligan choices. An opening hand with a Gitaxian Probe may only be a keeper if that Probe hits a land which often isn't worth the risk. The risk is low and the damage is generally not severe however it does mean you have to actually benefit from the deck reduction effect if that is all you are playing it for.

The synergy aspect of Gitaxian Probe is the deepest area of the card as it just has so many favourable interactions with things. When a card is so low all round cost you don't need the synergy it offers to be that powerful for it to be of considerable value. One mana cost reduction on a delve spell or a +1/+1 for a turn don't sound super powerful for a single cards effect but that is kind of the point, you aren't paying a card, or often any mana either, it is free making it delightful. 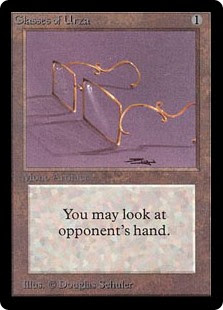 Gitaxian Probe has so much synergy with so many of the good cube cards and mechanics that it is often played just on those merits alone. Storm loves it, prowess loves it, delve is a big fan and so on. Then there are just a load of cards that are made better or more reliable or more versatile due to Gitaxian Probe. Cabal Therapy is a whole lot easier to hit! Snapcaster Mage and Abbot of Keral Keep become potentially higher value two drops.


Lastly, we come to the information element of the card, by far and away the most skill intense aspect. How do you use the information you have gained with Probe, what decks best take advantage of having that extra information? While all decks benefit from extra information it is combo and control that take the most away from it. Knowing when you are safe to make big plays is a big deal for both kinds of deck. Knowing what answers you might need or they might have is also significant. Aggressive decks tend to have less options and a more predictable linear strategy and so might well not be able to play around a problem card even if they know about it well in advance. When you have options, even if it just which two drop to make, the value of Probe goes up. This makes Probe better in decks with very low curves. A Zoo deck will get less from it than a white weenie deck because the Zoo deck is much more focused on curving out while teh white weenie is happy making one drops all day!

Another element to Gitaxian Probe's complexity is when you chose to play it. Do you blow it as soon as possible or hold it to milk a little bit of extra prowess damage as well? How often do you pay life regardless of the need of the mana it saves? Perhaps you are able to draw a one mana card or perhaps you just want to bluff a Force Spike. These are all context based things that there is no simple answer to. Simply being aware of these various options will help to make you better at using the card optimally. It is generally best to blow the Probe as soon as possible but certainly not always. Not only will it typically give you more information the earlier you use it but it can also dig you into things that are better to play that turn than the things in your hand. It it not that damaging of a card to misuse but it scales better than most with player skill. If you have the perfect curve then there is more merit to saving it but again this is no cut and dry rule. Certain matchups will have certain things you will want to know about asap while others it won't matter much when they have and an extra prowess trigger is probably the thing. Another noteworthy point is that turns two and three actually tend to yield the most relevant information as you will see a couple of extra cards from their draws. Often enough you potential interactions and options are limited enough on turns one and two that a Probe isn't going to affect that turn and so seeing another card might make it worth holding. 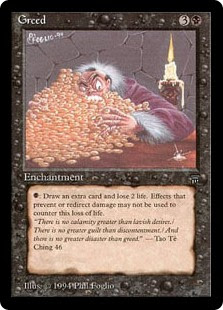 How you chose to play it is a aspect of the card that needs to be considered. Generally against a red aggressive deck you don't want to shock yourself unless you absolutely have to. It is worth avoiding against other aggressive decks but much less urgent. Whenever you are the aggressor or are in a control mirror the life is just going to be irrelevant and so even just bluffing the Force Spike or removal spell is going to be good. You never want to hurt your tempo with the card when tempo is your route to victory.

I think Gitaxian Probe has the highest rating to pick priority of any card in the cube. By that I mean it is one of the cards I value the most yet one I draft late. Probe also has the dubious honour of being the only card I highly value and regard that has so little impact or power. Having reviewed this article it feels a lot more like an opinion piece than most of my others, even the top X lists! I don't appear to have said much about how to use the card well. This is because the card only gives information, it has no "physical" effect on the game. In order to use it well or have it be useful you need to know how to use every other card. Basically, a complete and full understanding of the game is what you need to maximise the value of Gitaxian Probe. You have probably lost to a turn one Probe from Mr Finkle but little Timmy at the store is likely just shocking himself. The better you get the more you will get from probe. Obviously play it regardless if you have prowess and delve stuff on the go. Once you start to notice yourself altering your lines of play in subtle ways due to the Probe and the information it gives then you are likely ready to start throwing the card into any 40 and seeing how you can work it to your advantage there too.
Posted by Nick Nobody at 17:41