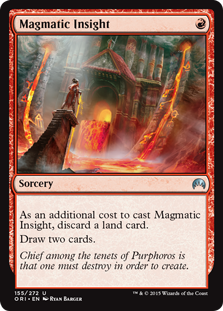 This is just a take on a Boros burn deck inspired by some of the red cards in MtG Origins. The premise was to have mechanisms that can abuse excess lands and combine them with Land Tax. The list I actually played was much thinner on these synergies and it turned out to not quite be enough. This list has added a couple more awkward cards to it so as to be able to actually reliably use the interactions instead of just flooding and dying. The first incarnation had no Seismic Assault and no Tibalt. Almost every game it got to the stage where I just wanted to draw Molten Vortex, even when I didn't have Tax and Tithe the low curve and relatively high land count ensured I was pretty flush with spare lands. One such effect and little ways to dig for it were not enough. My first list had nothing (except Fireblast, and I guess technically the Abbot as well) costing more than two mana but I have allowed this list to creep a little higher to up the power level a little. 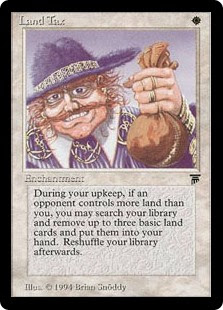 This list is quite thin on burn cards but it does pack the very best quality ones. The idea is that you have more stamina than other burn decks while still packing a similar sort of punch. You spend a little bit more mana on card quality and advantage but are returned this value and more by having only the cream of the burn as possible draws and getting more of those draws. Tibalt is a controversial card but I think the best available option. I would love to splash blue for Looter il-Kor or the new Jace but that would really hurt the Land Tax. Wandering Champion would be nice but seems like it is never triggering! Tormented Voice and the like are viable but really underwhelming. Tibalt may seem bad but if you have Land Tax or are at all flooding he is really impressive card quality in this kind of deck. On top of this he has much more utility than the other discard outlets, is the cheapest on offer, and is actually a threat.


My first list also had Kytheon and a  couple more dorks which I cut for being too cross purpose with the deck rather than not being good. Kytheon is nuts in general, the haste red creatures make him really easy to flip. The thing is you want burn cards more than dorks in this kind of deck. A couple of cheap powerful dorks to get some efficient early damage in is great, much like the modern burn decks run. Beyond that you are going to wind up having too many non-useful late game draws. Typically with these low to the ground decks you want to focus on either direct damage or creatures. You will always have some of both but the synergies will only really be in one of those areas. 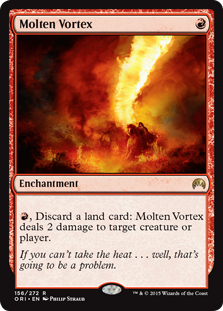 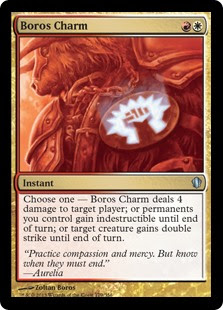 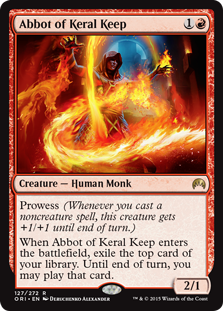 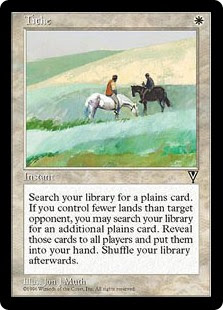 I wanted to run Gift of Estates but the Tithe is already awkward enough. The deck is primarily red and so you cannot afford many plains in the list at all. You have to be really careful about not pulling out too many of your few plains so as to not limit the effects of the Tithe. This can mean making a turn one Battlefield Forge instead of sacing an Arid Mesa to get a Plateau, followed by using the Mesa to get a basic mountain on turn two.


The deck has lots of card draw and advantage; Tax, Tithe, Abbot, Looting, Tibalt and Insight. This combined with the ability to turn your lands into Shocks in the late game means you can take things a little slower than normal. You can sit back a bit longer aiming burn at dorks. Beyond that this deck plays much like any other burn or red deck wins. Is it better than an agro boros deck, a red deck wins or a pure burn deck? Probably not but neither is it that much worse. It gets to use a lot of fun cards, draw and lot more, make more choices, have more options and have a lot more control over how the game plays out.  These are all good reasons to be playing this kind of thing instead of something well tried and tested.
Posted by Nick Nobody at 06:19