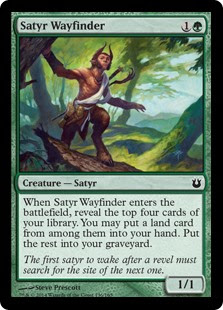 It is impressive for a thing to be both an adhesive and filler, certainly in material terms. For a magic card the Satry Wayfinder does the job of both very well. On the face of it Wayfinder is not a powerful card at all. A 1/1 for two that can find you a land. Both Sylvan Ranger and Elvish Mystic have seen a lot of play in the cube in very similar roles to the new boy in town - Satyr Wayfinder. They all have some role similarities to cards like Remand. Good ways to spend your mana early while both staying card neutral and having an effect on the game. They help you keep pace with aggressive decks and fuel you for the longer games. Wall of Blossoms is another similar card however it is much more defensive, any deck wishing to be the aggressor at any point would much rather a 1/1 that can attack and deal damage than a 0/4. Being able to usefully equip your cycling two drop or get it involved in an Overrun attack make the 1/1 guys more played than Wall of Blossoms. 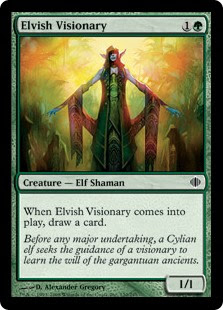 Elvish Visionary is the best late game of the three as a card is far better than a land or nothing however you ideally want these kinds of cards early. You are mostly playing them to improve your mana curve after all. As such the ones that get you lands offer you more consistency. Ranger is annoying as it only finds basics and can require you to tweak your mana base, broadly Sakura Tribe Elder is just a better call than Sylvan Ranger when you have enough basics. Why then is Satyr Wayfinder seeing the most play of any of this kind of card now by a significant margin when it is so similar to Sylvan Ranger, the weakest of all those mentioned here?


The answer is subtle and very broad! It is the adding of cards to the graveyard combined with the ability to find non-basic lands and as such in no way alter or impede your mana base. The former is the main reason but the latter is significant. Filler cards want to fit in with your deck as it stands, they want to support the other cards rather than need support themselves. Sylvan Ranger needs a tiny bit of support and as such is kind of weak. It is worth noting that Wayfinder also gives you relevant choices while none of the others do in quite the same way. When you hit more than one land in the four cards you can be faced with quite an interesting choice between utility, tempo and/or fixing. Sylvan Ranger may seem like it reliably offers you some choice but really it doesn't. A basic is a basic and the type should be pretty clear and obvious almost all the time. Wayfinder is not just a card that replaces itself like the others but also a card that can offer some relevant card quality and options. Impulse is used to find lands a lot of the time and doesn't come with a free 1/1! One thing to note about Wayfinder is that it can miss and therefore fail to replace itself . None of the other cards you might play in this role can (yes, technically superlate game or in a missbuilt deck the ones finding basics can miss, but they shouldn't ever when it is at all relevant) fail in this way. Firstly, your odds on missing are low, when you have around 50% lands in your library your odds of missing are less than 7%. When you drop to a lowly 25% lands in your library you still have around 60% chance to hit. Secondly, if you need lands and you miss with your turn 2 Wayfinder it is still very likely the best play you could have made. Clearing those four non-lands from your library means you are not going to be locked in to a screwing for four turns.

Now, to the real meat of why this badboy is so juicy. To really appreciate the value of dumping 3 or 4 cards into your graveyard I have compiled a list of the good A cube cards that can benefit from it. It is not a short list nor an exhaustive one. That was off the top of my head and intentionally didn't name weaker or more marginal cards. The list of mechanics supported by Wayfinder is pretty long; delve, flashback, threshold, unearth, dredge, recover, retrace, scavenge, soulshift! and spell mastery. There are a lot of powerful and commonly played cards and mechanisms on these lists and this is what propels Satyr Wayfinder so far ahead of the competition. Sac land into mana creature turn one followed by sac land into Wayfinder turn two lets you play a Tasigur on turn two! You don't even need the second sac land if you choose not to take a land with the Wayfinder affording you yet more options. It doesn't really matter in what way the Wayfinder supports your other cards, it can be three mana off a delve spell, some ammo for your Lavamancer or just the odd free card or half card when you hit recursive stuff, the fact that you get this extra value on top of your card and your 1/1 for just two mana is an insane amount of value. You really don't need much in the way of cards in your deck that go with Wayfinder's graveyard support before it is really noticeably powerful. Wayfinder is one of the most commonly played green two drops which is testament to how good it is in the present cube meta. Being in the company of Scavenging Ooze, Lotus Cobra and Tarmogoyf is no small feat. It is hard to call the card powerful, it clearly isn't. The power of the Wayfinder is that it makes your other powerful cards more powerful more quickly for a significantly lower total cost to you than the majority of other two drop plays. Magic is much more than just having the most powerful individual cards, it is about how those cards work together and the resulting effectiveness of your deck. The strength and popularity of Wayfinder should demonstrate this pretty well. Yes, cards like Mulch, Grisly Salvage and Gather the Pack offer this graveyard support as well for the same mana cost as Wayfinder and do other better things as well. These cards do see play in decks with heavier graveyard synergies. They perform a specific role better however they fulfil fewer overall roles. Just being a body you can have on the board for two mana is useful in several different ways and keeps the Wayfinder as the best all round two drop support/filler card on offer in green.
Posted by Nick Nobody at 08:08