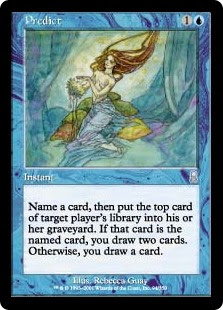 Predict is an old card that has never really seen any sort of play. It is actually just a slightly upgrading version of Foreshadow but these slight difference add up to a lot in the cheaper cards leaving Predict as quite interesting and Foreshadow no so. Predict is somewhere between a Thought Scour and a Think Twice. It is not really a card quality spell and so I do not compare it to Impulse or Lat-Nam's Legacy. That being said you can use it in combination with cards like Ponder and Divinig Top to mill away an unwanted card for that scry feeling. Sometimes Predict is card advantage, and quite good card advantage at that. Other times it is just a cycling card. The mill is nice utility too, especially given that you can target both libraries with it. It saw no play when it was printed because it missed the era of Brainstorm but pre-dated scry and basically all the other good cards that give information about the tops of libraries. Because Predict is such an unused card in the greater MtG community and also somewhat of a minor card it has gone under the radar despite an ever improving meta for it. With the cube being what it is at present, full of scry effects, it felt like Predict would shine so I have been trying it out and with good results. 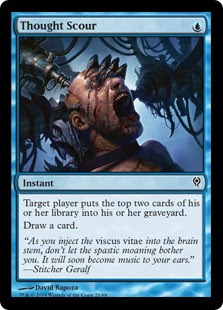 Drawing two cards for two mana at instant speed is great. Drawing one card is weak but not unplayable. Milling a card from the top of a library is surprisingly good, both Thought Scour and Mental Note are starting to see play in cube and have both done a lot of work in constructed formats over the years. Mental Note and Thought Scour are more potent at filling up graveyards as they put in more and cost less but they are never generating you direct card advantage. They are narrow cards because they are only worth playing when you have a lot of graveyard recursion effects and delve cards. Predict is worth playing in any deck because it is a potential cheap two for one but it will still help you with any graveyard synergies you might have. As to how playable the card is rather depend on what percentage of the time it will draw two cards rather than one. The playability will be slightly increased by having graveyard synergies and slightly reduced by how much set up is required to guarantee a double draw. 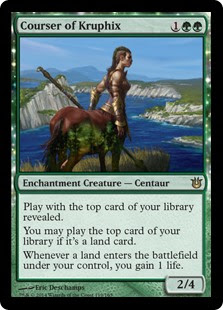 Obviously the percentage of hitting your Predict is mostly affected by how much scry and manipulation you have in the deck. What is coming as a bit of a surprise is how little of those sorts of things you can get away with and still have Predict be good. Remember that the card isn't ever awful because it cycles and does a marginal mill as well. This means it doesn't have to draw two very often to be an above average card, remember again that drawing two for two mana at instant speed is significantly above the curve in power level. What I have found is that Predict has been hitting two around 90% of the time making it pretty nuts. Yes, it is getting saved a bit so you can lay scry land and cast it rather than just trying to hit raw on turn two. This makes it a little less flexible than a simple two mana instant spell with an effect but still significantly more flexible than the mighty Treasure Cruise. It is cards like Courser of Kruphix, Delver of Secrets and Goblin Guide that provide a little bit of information and are cube staples that have been pushing up the effectiveness of the Predict. For some of those cards you don't even have to be playing them for them to be helping out the Predict and with none of them are you required to spend any mana to glimpse the thing you need to Predict away. Predict is a good card because it gives you choices. I have had situations where I knew the top card of my library but needed that card sufficiently badly to aim a blind Predict at my opponent to likely draw just that one card rather than mill that card and take two unknowns. Blind Predict has pretty low odds of hitting in the cube. Singleton format means you are looking at 1/30is on average outside of basic lands. Good three colour decks in my cube tend to have only one basic so that isn't a great help. In a mono coloured deck you can expect to have odds as good as 1/3 on hitting a blind Predict. Two colour decks probably average 3.5 basics of one colour giving you odds of around 1/10. You can target either player so you have better odds on having a one or two coloured deck to target. Overall I would put the average odds on hitting a blind Predict in a cube game by calling the most sensible basic land type at around 1/8 or 9. Despite the low odds of the blind Predict they are still sufficient to take it from a weak card at a single draw to an average or just above average card. Thus far I would say about 80% of the times I have seen Predict played it has been a guaranteed hit. (the astute reader will have worked out that this means that half of the blind Predicts cast in my testing of the card have been hits which is well above the stated averages, this will come down over time, we have just been quite lucky thus far. The point is more that most of the times it is cast it is known that it will hit and not that we are lucky and have managed an unreasonable 90%ish hit rate).

Having played with and against Predict there is longer any space in my cube for Think Twice. I love Think Twice, I love how it is a cheap, convenient and flexible two for one. I love how it is a card you are happy to mill away or discard and I love that it is generic filler you can play to good effect in loads of decks. Sadly, it is not a cheap two for one. It is a cheap cycling card, should you go two for one with it it has cost you a fortune. If you have the sort of time to spend using five mana just to draw two then you should probably have won the game already.That or you are so desperate that the game is already lost. Think Twice is a more reliable two for one than Predict but it is never in the same league in terms of cost. If you like to draw cards then I highly recommend Predict for your cube.
Posted by Nick Nobody at 07:18