After a glut of lists for red decks in the cube I feel I must do a non red list. This style of deck has been around for ages, the earliest version I can recall is Erhnageddon yet all those that follow are based on a similar principle; some solid threats, some non-land mana sources, a dash of cheap removal and some serious mana disruption. Other than goblins, elves and to a lesser extent red deck wins, this was one of the only early cube viable heavy creature decks. Even white weenie didn't really have the power to beat control and combo decks and the best it could hope to do was be a weaker version of this style of deck. The WG denial deck is still viable in cube but it is seen less often as so many other forms of deck have been discovered or become viable as well. Here is a fairly standard and upto date version of the deck which hasn't changed all that much over the years beyond upgrading the quality of the dorks it packs. 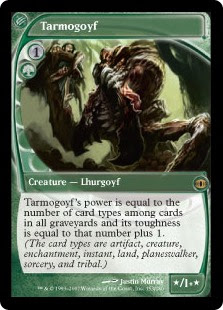 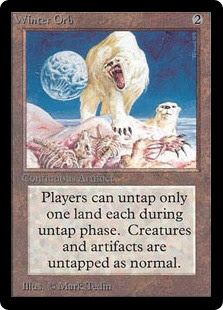 Kitchen Finks
Eternal Witness
Knight of the Reliquary
Beast Within 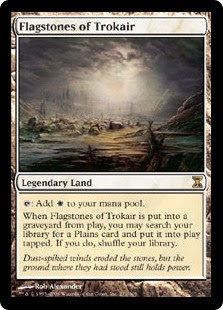 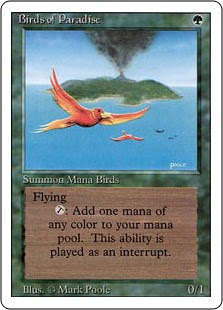 Your three key spells in this list are Armageddon, Cataclysm and Winter Orb, you are however relatively spoiled for choice with Ravages of War, Tangle Wire, Balance, Smokestack and even Catastohpe and a push to choose from. Smokestack is rather slow and you have little to abuse it with and so it is the weakest of the bunch. Balance is the most powerful but is too hard to set up in this deck, it is more of a control or combo card. WG doesn't have the card draw or quality to find and support things like Zuran Orb comfortably which is the sort of card you need to make Balance abusive. With all the simpler options available I tend to avoid using Balance in this archetype. Catastrophe costs 50% more than you want it to just for some utility which goes against what you are trying to do (have mana dorks in play) and should really only be a last resort. This deck doesn't tend to get to 6 mana very often and is usually a sign things are going a bit wrong when it does. Tangle Wire is great and lets you get set up around counter magic however it is rather short lived and with your deck being slow won't let you kill them in time. You need to follow it up with another mana denial card to give you the time to finish them off. As I mentioned, this deck can't support too many cards that lose you card advantage. Armageddon and Ravages of War are the staple used to wipe out all lands, they are reliable and you are set to recover well after casting them. I tend to only play one and have Cataclysm in the place of the other. The reason for this is to round the deck off as much as possible, you are already very powerful against any deck that needs to have a decent number of lands in play. You are however quite weak against decks that can run off just a couple of land such as a variety of weenie decks and the artifact ramp decks. Cataclysm is very kind to you as you have a good spread of things you are able to keep, and will cripple artifact and weenie decks savagely while still being nearly as effective as Armageddon against the control decks. Cataclysm also deals with planes walkers which can be difficult to deal with if cast due to the relatively low tempo of this deck. Winter Orb is a sustained dampener on your opponent and generally doesn't affect you too much however it is a card that needs using with care as there are both situations and match ups where it can harm you more than your opponent. There isn't really room in the deck for something like Relic Barrier or Icy Manipulator so as to turn the Orb off for your turn and with your mana critters and artifacts plus the low curve it doesn't add all that much any way. Playing the 3rd 4 mana Armageddon effect might be more powerful but it will give you some very clunky draws and so I favour the variety of the Winter Orb. 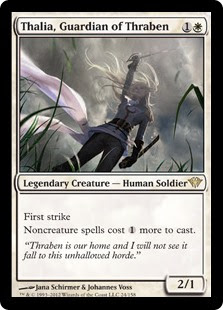 Thalia is a quirky little addition that gives you some presence on the board and hinders your opponent... hopefully. Like Winter Orb, Thalia's effectiveness entirely depends on what you are facing and unlike Winter Orb she is quite detrimental to the working of your deck and so caution must be employed when casting her. Life from the Loam allows you to have a bit of card advantage in combination with the cycling lands and Horizon Canopy while also aiding a swift recovery from Armageddon. It is a mana intensive engine and so shouldn't be used that many times per game, this is doubly the cast as the deck has no graveyard reshuffle effects and relatively few threats. Perhaps a Mistveil Plains is worth playing!

The rest of the deck is about getting the right ratios of removal, alternate mana sources and threats while cramming as much power as possible into the mix. Sadly there is not much space left for removal and although you would a few more there are not many places you can trim the fat to make some room. Neither white or green have any creature removal that doubles up as something else as well such as a Skinrender which leaves you very light in this regard. Ohran Viper is about the best you can do as a removal creature... I have been highly unimpressed with Fiend Hunter and would just rather play an Oblivion Ring or a Selesnya Charm or really anything instead of it! Being able to pack other utility on your guys is nice and does make up for this shortfall to some extent but creature removal is the most important kind to have in some abundance and is therefore the biggest weakness of the deck. Generally against decks with serious threats like a Titan you just have to keep them off the key mana they need to flop it out.
Posted by Nick Nobody at 14:23