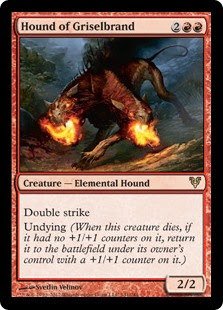 I was hungering to try something a bit different and came up with this deck. It is a copy of the deck "Big Red" got its name from. In Mirrodin block people were slinging Fireballs and dropping Arc Sloggers into play with their mono red mid-range decks. For some reason it was called big red however the cube deck by the same name was much more alike a deck Kai Budde played, this list for which is on this page. So given that the name this deck should be called has been taken I have dubbed it Medium Red as it is somewhere in the middle of the two viable mono red decks, those being the afore Big Red and Red Deck Wins of course. The idea behind the deck is to try and merge the idea of high power level and more serious threats from Big Red with the idea of redundancy and efficiency from Red Deck Wins. Big Red draws inconsistently and can either draw only ramp or only expensive action cards, Red Deck Wins can be forced to endlessly trade two for one to deal with opponents more powerful cards and both of these drawbacks are where most of their games are lost. The name Medium Red is appropriate is this is as mid range a deck as you could imagine, this means it should naturally have a good match up against any dedicated agro deck. The concern for the mid range deck is that it will draw expensive cards early and cheap ones late, which is much the same problem as Big Red faces although it is much more severe for Big Red. Even so the mid range deck is more at the mercy of the draw than most deck types and will suffer worst in a mana flood or screw. Red is a little luckier in this regard as even cheap burn scales pretty well into the late game. To reinforce this ability to draw consistently I played a vast land count, when you can't afford to risk it and are not intending to win the card advantage war, simply the tempo and card quality one then going a bit overboard on lands is wise. If you want to reliably be hitting your 4th land in most games it is surprising what ratio of lands you need to be playing. The last way in securing against the downfall of mid range employed in this deck is having lots of outlets to spend mana if you do suffer from getting too much on thing like fire breathing, flashback and level up dorks. 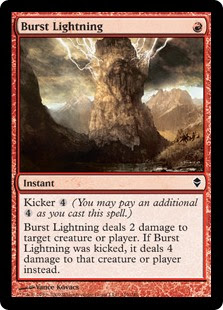 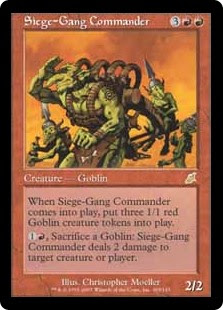 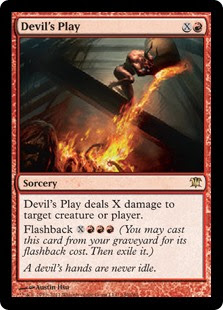 This is the first deck I found Faithless Looting to be weak in, this is because almost all of your cards are valuable throughout the game. You want to continually make your land drops so it is very rare you will have dead cards like red deck wins. You simply cannot afford the card disadvantage to support it even with a little bit of flashback and recursion synergy. There are a number of cards vying for the slot such as Pillage for a bit more all round utility removal and security or a cheaper yet significant threat such as Stromkirk Noble or Slith Firewalker. I would probably also cut the Seething Song as it is also card disadvantage and didn't seem to often add much to your tempo, it did offer some options and unexpected trickery but these were never used in my games as they were not worth the lost card and I had drawn the Looting to convert it into something better. Spawning Breath however I really quite liked as it gave some extra value, all be it not very much it still helps you burn things down when used with other damage spells and if you didn't need the ramp for anything useful you still have a chump blocker lying about. It is however the least powerful card in the deck by a long way which was something I was trying to avoid but I feel the hole it plugs a little and the way in which it does it is worth this lowering of power. Plus its always fun to dig terrible cards out of the C cube and put them to good use. 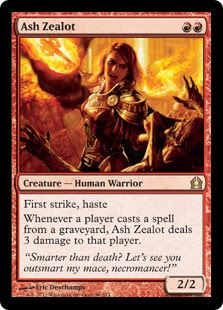 This was the first outing for three new cards, Hound of Griselbrand, Mizzium Mortars and Ash Zealot. I was excited most about trying out the Hound as it is a powerful card that I couldn't concieve of any decent homes  to play it in until this idea came along for which he is the perfect fit. Sadly however I didn't see him much and on the occasions I did he was instantly plowed. The Ash Zealot was fantastic, he fits an agressive or defensive role as you need which is well suited to mid range decks and rare from a red dork. The ability is far more liable to do you damage than anyone else with a high flashback count in the deck but it is still well worth playing for the cheap solid body. Mizzium Mortars was also pretty decent, having the ability to take out a 4 toughness dork for just two mana was really nice, I am used to accepting a two for one or having to pay at least 4 mana, usually 5, for that  priviledge in red. Having the option to save it and try and get value also added some juicy choices to the mix which is always the best thing to have with your cube cards. Most of the rest of the cards speak for themselves, things are there because of their high power level, raw efficiency or their value in card terms. Manic Vandal, Flametongue Kavu, Arc Trail, Slagstorm, Devil's Play, Seige-Gange, Inferno Ttian, Hellkite, Chandra, her Phoenix, Hound of Griselbrand, Mizzium Mortars, Firebolt and Grim Lavamancer are all easy to get 2 for 1s or better. Many of them are also high powered cards. The thing I liked most about how the deck played was that it shifted from control to agro incredibly well and was able to apply a lot of pressure very rapidly from out of nowhere. The fork effect on Chandra is particularly brutal in this deck with some high output burns spells. Overall however this deck is more of a tier 2 deck, it will give a good fight against the tier one metagame and destroy a few matchups but overall its likely win percentages will be 40-45% I expect. Being mono, and red at that, is is very vulnerable and relatively inflexible. Quick decks can get away with this as they don't give opponents the chance to exploit their vulnerabilities however the medium red deck allows more time to cast it and more chances to draw whatever it is.
Posted by Nick Nobody at 06:49