Lands have some of the most broken effects, this is unsurprising as they are quite hard to balance as they each have the same "cost" as it were. Subtle changes to balancing drawbacks can drastically effect how good it is. There are a few broad categories of lands, those for fixing, those for ramping and those for utility. The latter category brakes down further into card advantage, removal and threats. It was hard to decide what constituted a cycle of lands and which should be viewed individually. The various dual lands are identical except for the colour production and so are reasonable to treat as a single kind of card. Except for the man land duals I have treated cycles which differ by more than just colour as individual cards. The reason for grouping the dual man lands together is because they would clog up too much of the list with most of them being contenders for slots. 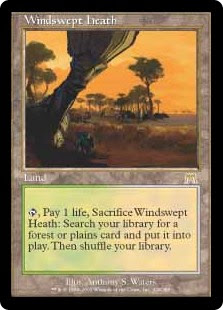 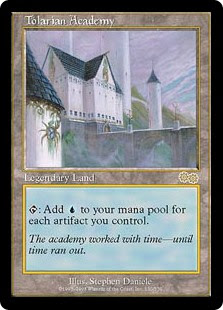 Poor old Gaea's Cradle not making the cut, it turns out mass removal is just too brutal making it unreliable and/or far slower. The other notable omission is City of Traitors, lands that can tap for more than one mana are instant eyebrow raisers always worthy of much consideration. Tolarian Academy is one of the easiest lands to use that can get you more than one mana. Not only will it often tap for more than one early it starts to tap for vast amounts of mana a little further into the game. It was beyond unfair with the power still in the cube and wasn't hampered much by removing it. Mana might be the most important thing in magic but it is closely followed by cards for which Library of Alexandria is one of the most effective at getting lots of. Drawing double every turn will win you most games, even at a tempo cost which on Library is optional. Most games where you start with this in your opening hand are won by it. 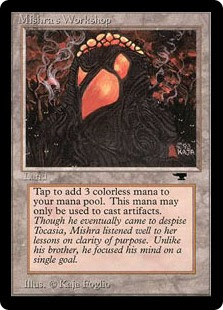 Stripmine is very powerful but not quite as broken as the Library or the Academy, even Workshop for that matter. It is banned mostly because it wins games in a very tedious and un skillful manner. It is very hard to disrupt or play around and leads to more fun games when sat on the sidelines. The cycle of sac lands are the outright best dual lands in the cube, much of which is down to the existence of the other duals with the basic land types. They do still thin decks, fill up graveyards. shuffle libraries and offer countless other synergies. It is rare that any sac lands are left unplayed in a given cube session.

Mishra's Workshop is kind of a fairer version of Tolarian Academy. It only works well in artifact heavy decks but doesn't scale quite as well nor offer the most useful form of mana. Even so, 3 on one land is absurd and leads to really swingy openers. Without other unfair cards like Black Lotus, Sol Ring and an abundance of moxen Workshop is left alone as an easy and overpowered ramp land and is less unfair than when a cube is powered. As such I think it needs to be grouped with the power and only included in a cube if the rest is. 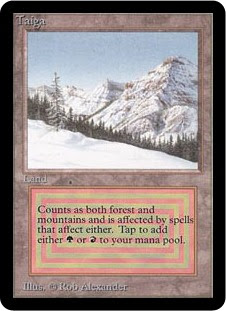 The original dual lands have no drawback other than to certain hosers which don't really have a place in cubes any ways. There is not much to say about them as they are so plain and simple. Appreciating how good these cards are is down to understanding the importance of being able to cast what is in your hand, it goes to a basic understanding of the magic mechanics. Rather than being good themselves dual lands make all your other cards better and they do this without costing you a card slot. The original duals don't even cost you life or tempo.


The dual man lands are not great duals as they go, nor are they the most exciting of threats however they are both of these things, and as previously mentioned, they do this without costing you any card slots at all. This cycle has almost single handedly made sorcery speed removal un-viable to be relied on for the control player. The shock lands are the backup for the original duals, the cost is very minor and often avoidable due to the kind optional nature of the cards. They are clearly worse but not by a significant amount. Wastelands is the fair version of Stripmine that only punishes those who are greedy with their lands and colours. It suffers some of the same problems as Stripmine but is far easier to play around. 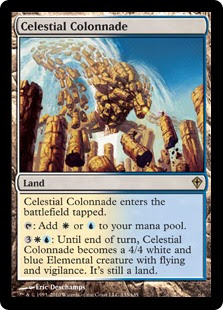 Ancient Tomb is a fair land within the cube, it taps for two which is fantastic and just what some decks need yet the drawback keeps it in check. It is reliable and explosive but scales down in power as the game progresses rather than Academy which goes up or Workshop which stays the same roughly. The artifact lands are fantastic enablers working with affinity, metalcraft, Tinker, Goblin Welder, Trinket Mage and many other good things. They are slightly more vulnerable than normal lands but otherwise have no typical drawbacks for lands with bonuses. They wind up in a lot of decks serving a lot of different purposes. Lake of the Dead is one of my personal favourite ramp lands and is one of the more powerful cube cards to still be under the radar as it were.  You can get 5 mana on turn two without anything more fancy than another swamp! The cost of this mana boost is steep but easily recoverable in black. The set back is also less damaging than you might imagine, should you lay it on turn three and use it every turn there after and compare that to someone just making swamps and using all their mana every turn it would take till turn 8 before the swamp only player had made more mana. 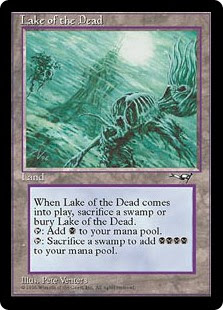 Treetop Village is the best man land being robust, powerful and cheap to use. Faerie Conclave is decent but a little vulnerable and slow and the rest of the cycle are pretty weak.Village is not however a mana fixer as well and so is still weaker than the average dual man land. Karakas is a card I used to have banned as it reads "bounce a legend" which was rather over powered against lands making things like Pendlehaven and Urborg, Tomb of Yawgmoth unplayable, it also made it very hard to kill as it could bounce itself. Using the oracle rules to only bounce legendary dorks makes it much fairer but still powerful to the point of making legends very weak in the cube (compounded by the blue clone effects). While it can do nothing for you it is still a coloured land with no real drawbacks beyond a vulnerability to Wastelands.