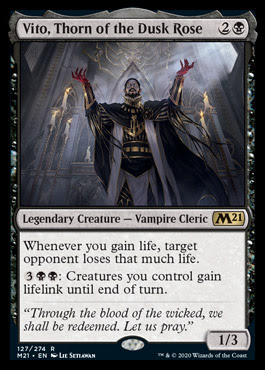 Vito, Thorn of the Dusk Rose 5

Highly abusable effect but really you need a lot of support before this is a good three drop. You want to be able to flop this out at 3 mana and have it be immediately lots of life loss. Without lots of build around attention the life loss isn't coming until you invest that further five mana. The body is fairly useless so you do need Vito to be supported. The look of the average cube as well as mine would certainly allow for drafts where this was amazing but I think it is generally going to be a little narrow and see infrequent play. A few more top tier life gain cards in black or some specific tailoring of a cube and Vito could shake off that narrow tag and just be a really scary threat. 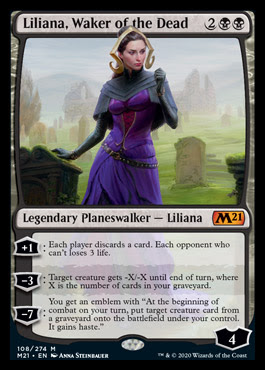 Liliana, Waker of the Dead 6.5

While this is clearly the most playable and best all round four drop all black planeswalker that is not saying very much. The +1 is a little too symmetrical to be amazing and the -3 is inconsistent removal. Sure, the +1 is better than Liliana of the Veil but the difference between a three drop and a four drop with that effect is significant. The -3 might do nothing for you, it can be countered with graveyard hate, and even when it is working as intended is still a hefty loyalty cost. Even the ultimate can be a do nothing on this card. While this all sounds like I am down on the card I will still be testing this. It is still a walker that can control a game, provide options, and win in a number of ways for you. The huge hole in black's four mana walkers means this might make the cut just because walkers are good and the bar is low for this flavour of walker. 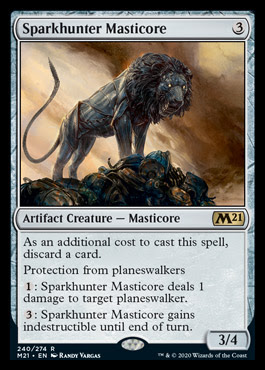 This is pretty terrible generally and yet outstanding in the face of a planeswalker heavy deck. This is costly to get out with the discard and expensive to use with a pile of activated abilities. One you stick this on the battlefield however it will easily keep it clear of walkers so long as it remains. Planeswalkers are a huge deal in mine, and most other unpowered cubes these days. Most games are won by walkers and so this card has some hope. I don't love such a heavy handed approach to combating walkers but it might be required. Certainly a card that needs some testing. It is polar which I dislike. It is also fairly low powered all things considered. It is just really effective at controlling walkers... It feels like a bit of a 6 drop as you want it to survive when you are investing 2 cards into it. Still, six drops you can play at 3 if you need sound good! 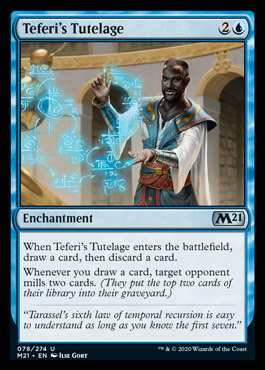 A lot of very similar cards to this from Jace's Erasure to Psychic Corrosion to Sphinx's Tutelage. This is likely the best of the bunch having some positive immediate effects. Playable but narrow. 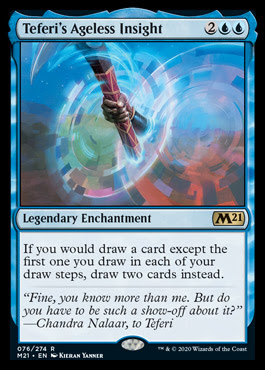 Powerful draw engine in the right deck but sadly rather a four mana do nothing as well. Too narrow for general cube use but certainly a consideration for tailored decks. 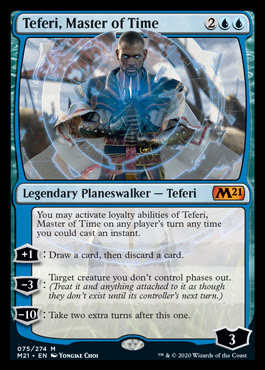 At first look this seems poor, but then you realise that you can do the +1 immediately and in your opponents turns as well. That makes it good for heads up play and nuts for multiplayer. The +1 is effectively a +2 and does twice as much looting. The instant speed also makes the phasing ability strong too. To attack and kill Tef you have to be able to make an attack where any one dork in the attack is not needed for the kill. Or indeed an attack where by a +1 loyalty gain doesn't save him. The Master of Time is deceptively hard to handle. Looting is really good in cube with delve and escape now properly turning things in the bin into resources you can reliably convert to cards or mana. Or just win with Oracle and decking yourself! Tef gives huge board control and supports your build with card quality and filling up the bin. The -10 is a big threat as well. You should be losing pretty hard when you let your opponent see at least 7 extra cards and take two extra turns back to back. It isn't a win by itself but it should win easily with basically anything else. As such this Tef feels like he is a really strong support planeswalker but not one you use directly for value or threat reasons. This makes him unlike most other walkers but then so does the instant speed use. Dack Fayden is the closes walker to this one in terms of broadly being a support card and not a value or threat one. It is a tenuous comparison thought, Teferi is easy one of the most unique walkers. 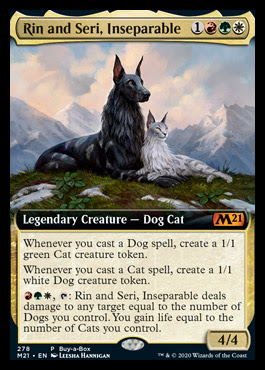 Rin and Seri, the Inseparable 2

Endlessly narrow on being a tri-colour card and a tribal card...twice. While there are a few cats and dogs in cube it isn't close to enough for this to be considered. A cool and fun EDH card and perhaps even powerful enough for standard although that will entirely depend on the cheaper support cards available. Despite high power Rin and Seri is still a card that is vulnerable to spot removal. It is hard to get more than a 4/4 out of this until you untap with it. 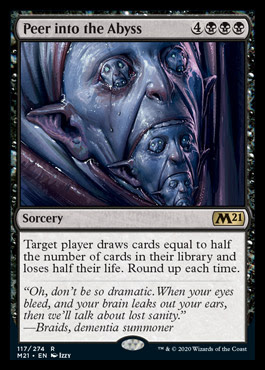 Peer into the Abyss 2

Cool art. Cool affect too, midway between Enter the Infinite and Infernal Contract. I can see this getting use, mostly in EDH, as it is a nice balance of massive power at just about affordable cost. Mostly a combo card I expect, with things like Seismic Assault and Zombie Infestation. An Ad Nauseam you can run without having to consider card costs (or need of Angel's Grace effect). Cool and useful card but certainly not a draft cube card. 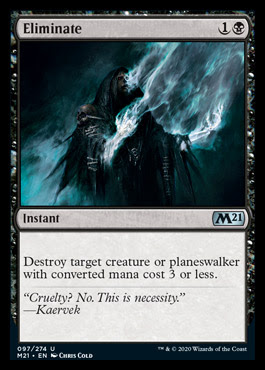 Smother than can hit planeswalkers. This is pretty perfect for my cube. There is a huge gap in the market at two mana for black removal as all the Doom Blade style cards stopped seeing play in favour of Hero's Downfall effects. I have 18 three mana walkers in my cube presently which surprised me as to how many. Commonly played and important cards to remove for the most part too. This kind of thing would have really helped to calm the Oko effect in standard. While I don't think this is better than Murderous Rider or Hero's Downfall I imagine it will see as much or as more play for two reasons. Firstly it is less replaceable but more relevantly it is just a single coloured mana making it far easier to play in multicolour decks. This is probably as good or better than Abrade which in turn means I probably should just give this an 8/10 rating. 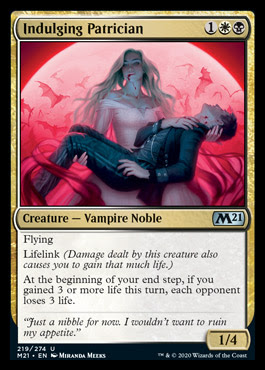 Powerful but narrow on multiple fronts. In the lifegain tribal deck this is a very interesting and potentially powerful card. In any sort of limited setting it is not what you want to see. 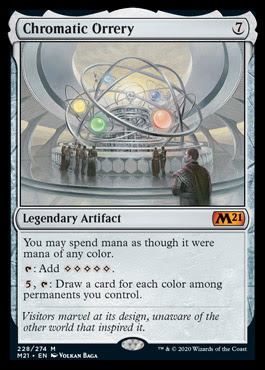 A very big Gilded Lotus indeed. A nice card draw mode slapped on it too which will help as five mana a turn extra will allow you to dump resources at pace. It feels a bit big and slow for my style of midrange tempo cube. It might well be good in more powered or combo focused cubes. Like many of the more recent cards, this will do best in EDH. Oodles of power and conveniently packaged as far as you can with a seven drop. 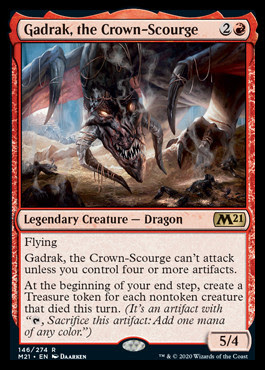 I like this a lot so feel like I will overrate this due to that bias, or over compensate and go the other way. On the one hand it is a very efficient threat with mana generation perks. On the other hand it is a conditional generic beater that has the floor of being a wall. In a deck like affinity where you have loads of artifacts and creatures and the ability to sac them Gadrak seems like only upsides. The thing is such decks are not really in the market for non artifact coloured three drops. If the decks where he is freely supported don't want Gadrak is he good enough to play in your average cube deck? Probably not but I will be testing to make sure! A 5/4 flying wall at three mana isn't terrible. Getting treasure when things die is great too. It is an odd mix of all players dorks but only on your turn and only non-token dorks. Not getting the treasure until end of turn keeps it safer as a combo enabler but you are still looking good in any sort of close dork based match. A blocker, a bit of mana, and one day maybe a threat would cut it if it were not for the frequency of mass removal. A bit like if Legion's Landing was a 1/1 itself instead of making the token. Imagine how much worse that would be. Gadrak is likely worth the investment if he lives for some number of turns but the risk of just having him randomly die for little cost is unpleasant.