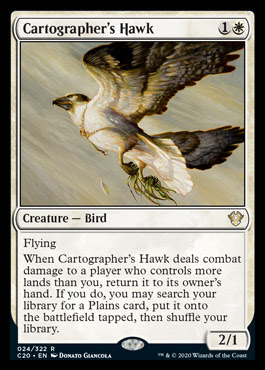 Interesting card. Probably most akin to Knight of the White Orchid but inverted somewhat. This has the perks of being able to make it regardless of game state and develop the board without forgoing potential value. On the flip side you have to wait to get value and you give you opponent a window to disrupt your plan. There is also the bounce effect which is a bit of a tempo cost. It does let you reuse the Hawk to get another land but there are rather diminishing returns on this both in likelihood and utility. All told I think this card is probably just a bit fair for cube. Most of the time it will just be a Stormfront Pegasus. The return to hand isn't even optional so the few occasions you want the threat in play more than the land it will be sad. One toughness two drops have to be pretty special these days and the Hawk doesn't feel that way. There are much better white ways to find lands and much better threats. This does both things below par leading to a below par card overall. Shame though, I like the idea of the card and would like to play with something like it. Perhaps as a 1/3 flyer and another key word like first strike, vigilance or lifelink? Then I think it would have been strong enough for cube, perhaps even a bit above par. 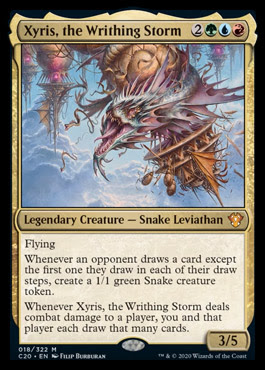 A very silly card indeed but not lacking in power. Giving away cards to your opponent isn't great but when you are drawing them too and with first use on them and having an army of snakes and a big flyer then you are probably pretty happy about it overall. A risky and polar card that seems to have a strong enough average. The things that I expect to actually rule this card out of contention are being three colours and being a five drop with too little immediate impact on the game. If it lives and connects it should go on to win most games. 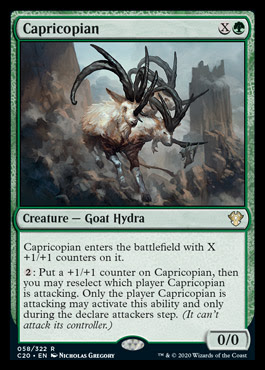 This just does nothing at all really in a 2 player game other than be an Ivy Elemental. 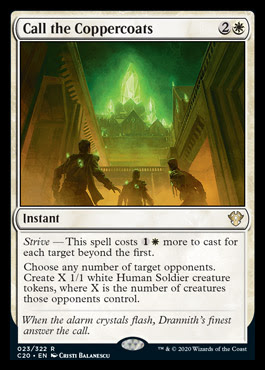 This is narrow, situational and boring in a 1v1 game. Cards that need opponents to fulfil certain conditions to be of use are generally bad and rarely do better than sideboard slots. 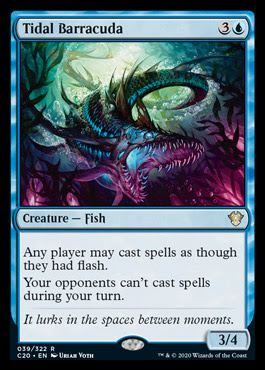 Well this is an interesting littly fishy. Lack of flash itself on top of poor body do ruin this a bit. Teferi, Mage of Zhalfir is a much more powerful card with more effective disruption although he only boosts your own creatures with flash. Leyline of Anticipation is probably a better way to give all your own things flash if you are really set on that. All told this might be playable as some backup to either of those cards even if not the first choice in any setting. The Barracuda only disrupts instant speed cards really, it is a buff to all the sorcery speed ones your opponent has. While not super relevant it will come up. That now instant speed Chupacabra is a lot harder to play round when you need to double block something for example. Overall this is a low powered and narrow card but it is unique which will help its chances somewhat. Cool design for multiplayer too.

One of the better partner options in this series but still not really there. Nikara is narrow and vulnerable. There are multiple better ways you can convert dorks into cards. Yannik is more powerful but still situational. It might have a decent ceiling the average performance is going to impress a whole lot less. Nice options for EDH build around themes but unlikely to make any waves in any cubes. Best I can really offer is Yannik in flicker builds but it just seems so win more. 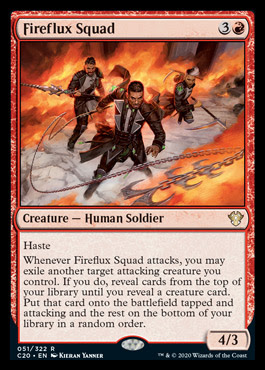 This isn't actually awful with a 4/3 haste floor propping it up relatively well. It is then pretty good in most decks in my normal cube. There are loads of tokens and loads of EtB effects. If you are just tossing away a Rabblemaster token and finding a Pia Nalaar with it then you are very happy with that outcome. Suffice it to say that the example given is closer to the floor than the ceiling too! Certainly this is a very random card that can randomly win you games when you flip Inferno Titan or Atarka but it does have a strong build element that determines how good the all important average is. Certainly the power is there with this card for it to have a fine shot in the cube. I don't love the card due to being so random but I also don't hate it either. The card has it's merits and intrigues. 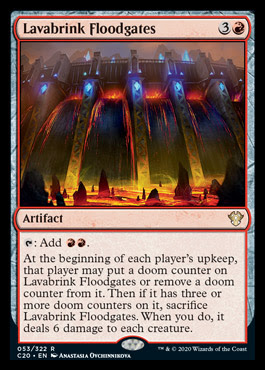 Mostly a big mana rock in heads up. Not terrible at that but rather narrow being both big and red. What I like most about it is that it can cost 3 off the back of a Ruby Medallion. That seems saucy. Also cool that it can be used with proliferate to some extent for the other functionality in heads up. 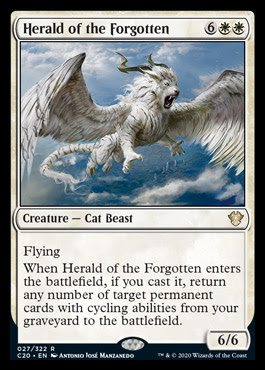 Herald of the Forgotten 1

Hard to abuse and hard to cast. Couple that with the narrowness of having to power this up with cyclers and you have a card that isn't really for cube. A great tool in cycling EDH decks where the potential ceiling is mental. 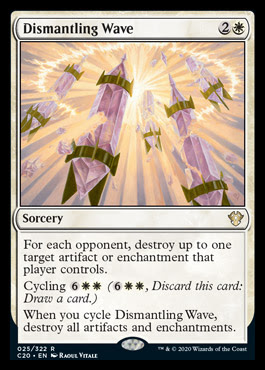 Both modes are wildly over priced for heads up play. There are better cards in all shapes and sizes to keep this well out of contention. 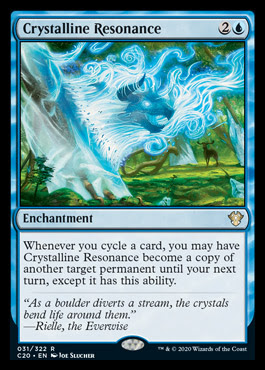 This is a very cute and flexible card. It is probably just too varied, aimless and too narrow to get much action in cube but it is a fun one. That alone might get it some attention. 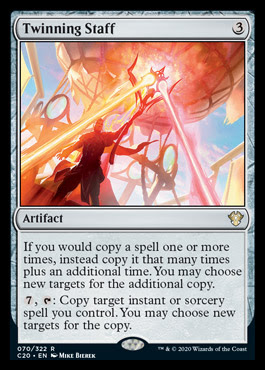 Expensive to do anything with this and incredibly narrow when just working off the passive. Not many cards fork things, not many situations lend to them being efficient. This is somewhat getting rating just for being unique. I can't see me ever playing this card though. 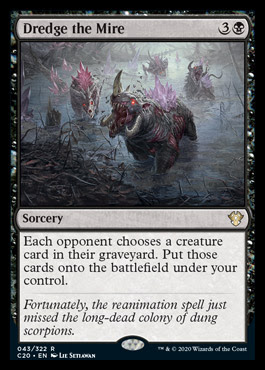 Not enough reliability nor cheap enough to have a hope in cube. 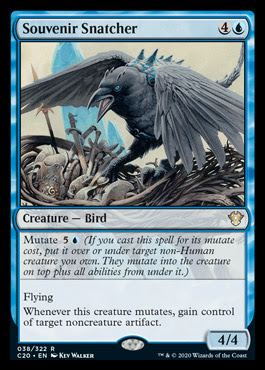 Not well costed and overly narrow. If you want to steal artifacts then play a cheaper better card to do that. 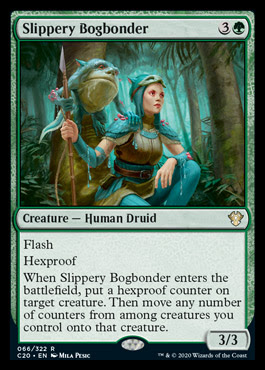 This is pretty powerful but it is expensive and situational. Best case you save something from removal and tool it up with a bunch of stats and keywords to empower the hexproof. Worst case you have a Hill Giant with flash and hexproof. Not terrible but not very exciting. Not all that easy to put to use without some degree of focus on the deck construction. As a means of protection this is too expensive. As a means to buff it is a bit needy and awkward. The high power level of the card is dramatically reduced by these issues. It is just a hard card to use all that well. 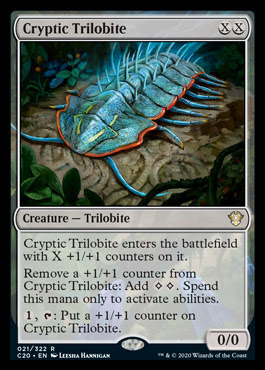 A fantastically odd little critter. These colourless non-artifact dorks still freak me out a bit. I am not sure exactly where this fits in and how you use it but as a wise old magician once said, a two mana colourless card that produces mana can't be bad. I imagine it will do a lot of activating signets, donning equipment and charging up Walking Ballista! It has that nice scaling effect of scaling both over time in play and over time out of play. It is late, it is early. It is options. You don't play this without things to spend the mana on, it is a shocking Hangerback Walker then. I don't expect you will need many things in your deck to spend the mana on however before this looks like a good include. 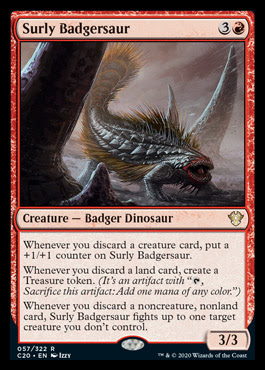 A mini Bone Miser. Mostly I want to abuse this with Seismic Assault. It is really all about that treasure. Growing and fighting is all ok but it isn't exciting or easily abused. Turning discards into mana however, that is all sorts of good. Being a bit expensive and vulnerable means this will not get loads of love but still, it has the capacity to do some very powerful things in the right place. I like this as a combo card. I think it is pretty decent as a synergy card in say a Burning Inquiry Goblin Lore sort of deck. I think it is very bad anywhere else!