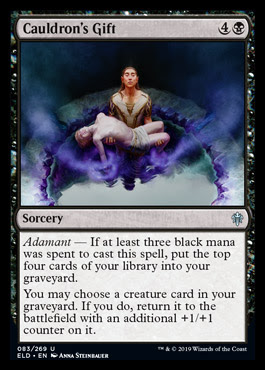 Self mill at this late stage isn't useful, it might give you a last ditch hope sometimes but that is not worth playing a decidedly sub par reanimate effect. 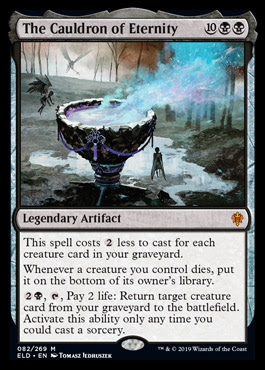 The Cauldron of Eternity 4

How to rework Recurring Nightmare so that it isn't bad, isn't broken, and isn't abusable? The answer looks a lot like this. With some self mill this comes online fast and has ongoing fuel while even protecting you a little against decking! When out it is generally better tempo than Nightmare as you have no need of a thing to sacrifice. Despite the high potential this isn't getting it done in the drafting cube as it just needs too much support to work well. Whip of Erebos is a preferable card to this in the limited settings and that is a playable but mediocre card. This will do some nice things in the decks able to support it however it might also just be enough worse than Recurring Nightmare that it still doesn't get all that much action simply being superfluous to demand! I do like the idea of it with Birthing Pod rather a lot! 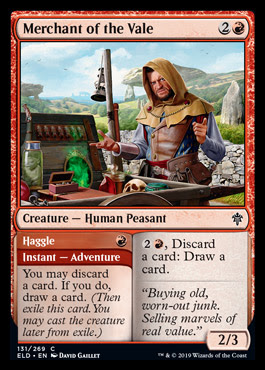 Merchant of the Veil 7

They may have banned out Faithless Looting but they have at least given us some mild compensation. This rummaging half Looting is wildly worse than Faithless but it is still cheap and still does the desired action. It even still has stuff to do later on that looks like looting and extra value... Certainly you are 9 mana worse off than a Faithless Looting for the four loots with this, or indeed an impressive 6 mana worse off to get just two loots, and yes, this is rummage not looting, and no, a 2/3 is not offsetting this shortcoming, nice though he is. Despite all that I think this has a place. Instant is a really big deal and lets you do a lot more with this. If Insolent Neonate gets play then this should get rather more! It will absolutely feature in a load of my cube constructed decks, it will also feature in a lot of modern brews, most impressively however I think it might well be good enough for the drafting cube too. Low powered but really rounded and cheap and convenient and generally good support. This is good in all the ways Faithless Looting is, while not being as good at the thing Looting does, this at least offers a bit more utility. This is one of the more exciting cards for me from this set. Key redundancy for a useful effect in red that is cheap and interesting. Love it. 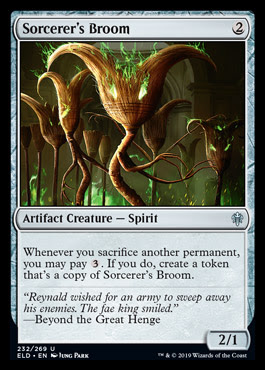 This seems quite fun with Training Grounds. Otherwise it seems terrible. I don't want to pay 2 for a 2/1, why would I want to then pay 3 for another? Some combo application with cost reducers but I think other cards just do the same sorts of things better. This does have the advantage of working with both Ironworks and Ashnod's Altar perhaps making it appeal a little more in singleton. 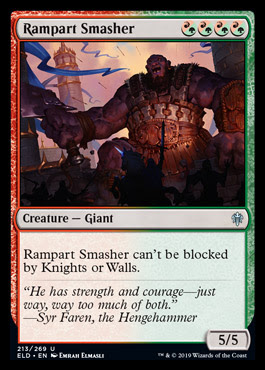 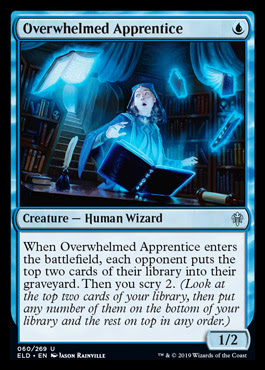 This is obviously not a draft cube card but I cannot see it avoiding play, it just does too much for too little. The ideal home for this is a turbo mill deck that can use it to do a bit of milling, a bit of board control and a bit of card selection on the cheap. The perfect all rounder and way to start the ball rolling. The problem with this outside of a mill deck is that you can only mill your opponent and there is very little good reason to do that in general. As such you are likely just giving them a boost. Given this is a one drop you really don't want to give away a boost what with this being such a minor boost to your own plan. Just two free mana on a delve card later down the line could wind up killing you, certainly sounds better than a 1/2 with scry 2! 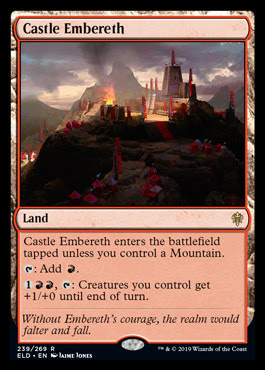 A little dull but very powerful. This offers a lot of face damage and a boost to combat for very little cost to your deck. This is like a wide version of Kessig Wolf Run, or indeed a nice mono take on Gavony Township. Now, put next to Gavony Township this looks rather lackluster in terms of effect. It is only one mana cheaper yet it only buffs power and only until end of turn. You cannot even do any cool synergies with counters. The thing is that while that is all true it is not the important bit at all. The important bit is the cost to your deck. You are playing these for the "free" bonus. The bonus really only has to be the slightest of bonus to be good if it is actually free. You are still primarily playing cards like this as lands. Very few lands offer utility so powerful and efficient that you are happy to play it over a spell, Gavony Township included. Plenty of cards do team wide +1/+1 effect cheaper and better. The bonus is only free when you would be playing that land regardless, if it is in a spell slot then it cost you a card even if it didn't cost any mana. Anyway, all that is to say is that the drawback on this card is substantially lower than that of a colourless land in most cases and by a good margin. Most two colour red decks with a decent mana base and all mono ones should have no trouble running this and rarely find it coming in tapped in a way that costs you. It will happen but not often, certainly not enough to offset the upside this has in the right deck, ie any with reasonable creature count and/or token generators. It then always taps for red at no cost which lets you play a heavier count of red mana symbols in your costs or include more utility lands that only tap for colourless. This is about as free as a land with a cost gets in cube. The Ipnu Rivulet cycle comes close but they offer less utility to fewer decks and are less desirable on that front even if they are superior in general as mana producers.

This can very easily represent a Lava Axe on turn four. It is not that hard to have 5 attackers by then with all the Rabblemaster things in red. That sort of start should just win and likely would even if you had nothing to do with your mana on turn four! Even so, it is still really nice to be able to threaten so much extra damage without playing any spells or extending in any dangerous way. It will make blocking a nightmare. Just having this open means all blocks need to take into account the potential for them to gain a power. This will lead to weaker blocks and things getting through for free a bunch without even having to use the Castle, just it being there will do the work. This is suitably powerful and on-theme that I suspect it would see more than enough play in cube to merit inclusion. My gripe with doing so is that it just takes the slot of a basic land and adds relatively little. It makes drafting a bit tighter on playables and just for a pretty minor perk. I run very few utility lands for this reason and so this will have to go a bit above and beyond to last. It does have the best chance of the cycle to do that. It easily has the most powerful effect that benefits from scaling and is active early in the game and that is well on theme with a lot of red strategies. For cube it is more comfortable and more powerful and more playable than Barbarian Ring which has held the title of premium red utility land. 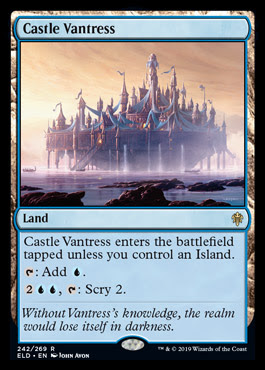 The cost on this is very high for the return but then the cost of running this is also very low. Unless you have very few Islands (like, a 3 colour deck with a relatively poor mana base) or spells that need Islands in play to scale/work then this will rarely come in tapped. Scry 2 is not really value but it is exactly what you need at the times you have five mana spare! This is probably better than draw a card in most cases that you would use it. Either you are in top deck mode where a bit of card quality goes a really long way or you are just sat on countermagic stalling the game while you make lands and/or dig for a threat. Probably a bit too marginal a perk to merit a slot in the drafting cube but I imagine this will make the cut in most slower blue decks that are built in cube and other singleton constructed settings. It looks weak compared with the rest of the cycle but I think it is a lot better than it looks and will perform impressively. It is just so apt and convenient. 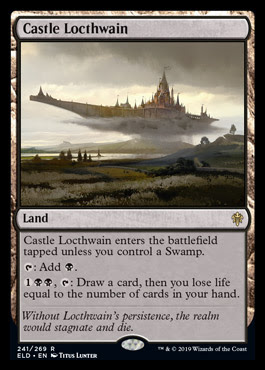 This is worse than it looks I think but still pretty decent. It really wouldn't shock me if the blue one saw more play and performed better than this in the long run despite this clearly looking better. The issue is you cannot use this comfortably with much of a hand which rather limits this. It makes it a poor tool to dig for land drops in the mid to late game, it is pretty bad in a control deck too. The more aggressive you make your deck the better this looks but then you are paying 4 mana to draw a card. That is pretty poor given the usual rate of getting cards as a black mage. You can directly recur threats for less than that! The thing is, it doesn't hugely matter how poorly suited the ability is, it is on a land with very little risk or downside and so it will see a lot of play. 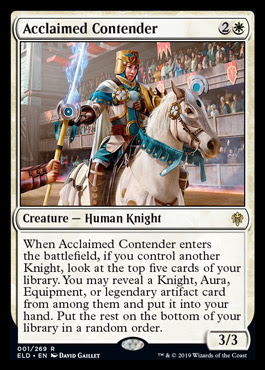 Certainly a tribal knight only card and a somewhat polar card in that setting. You have to have a knight in play which means you need a high knight count including plenty of cheap knights. When you don't this card blows hard but when you do it is about as good of a 2 for 1 dork as you can find. It is big, it digs deep and finds a fairly wide range of action assuming most to all of your dorks are knights. It is too good not to play when you can support it but it will hurt you now and again when playing from behind. 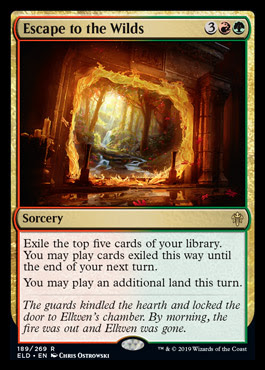 Escape to the Wilds 0

Big and powerful card advantage spell but not all that well positioned. A gold sorcery speed five drop is not where you want to be for card draw, even at the impressive rate of 5 to 1 with a dash of Explore in the mix. With this amount of mana you want to be making threats not getting value. You can't play this in a cheap deck as it will sit in hand as dead weight too often but you also can't play it in big ramp decks as you might well exile well over 10 mana worth of spells and just burn through your threats without getting any use from them. This is exactly the sort of card planeswalkers have made pretty unplayable.