Another tribal tool that is too low powered and narrow for general use but scales up quickly and well with tribal support. Being both cheap and a tribal payoff card is exactly what you want in order to propel an archetype. 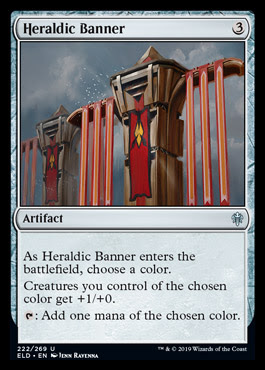 I like this but I think it is a bit over cost and at odds with itself. Aggro decks don't need three mana ramp. The buffs you can get at three mana are also a lot better than what this does. Play what you need, not half baked attempts at multiple things, half of which you don't really benefit from enough. 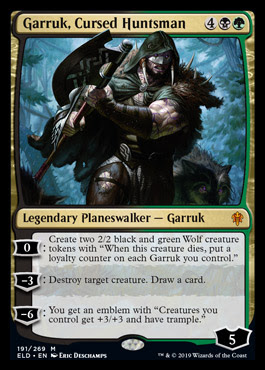 Although up against stiff competition in Vraska, Relic Seeker and Liliana, Dreadhorde General I think the Cursed Huntsman has some real game. Mostly it is down to his board control and guaranteed value. When you use Vraska to kill something she usually dies leaving you with a 1 for 1 trade in which you paid six mana and have just a clue to show for it. Liliana kills more and returns more value but Barter in Blood is rather more situational and harder to use. The card draw element of Liliana has proved to be a drawback on far more occasions than I would like! It might seem close enough between these three cards in terms of power that the mono coloured one would just win out but the clean ease of use of the gold options is pretty big. The main problem I found with the other six drop walkers is the single 2/2 dork they make. It has such a tiny impact on the game at that point. They are miles away from Elspeth, Sun's Champion in terms of their ability to simply take over a game. Changing a single 2/2 into a pair of them however feels like it is all the difference you need. That is much more like the Grave Titan we want and need this to compare to. It defends and protects really well and poses a pretty serious threat pretty quickly. The -3 is also just lovely. You kill any problem, draw a card and flop out a huge problem of your own. Even if they just attack your 2 loyalty Garruk to death you are still up a two for one and you have probably gained tempo. The emblem is dangerous as well, it is like Sun's Champion in that it closes the game and works well with the token generation but it is cheaper. In a stall position you have to stop Garruk getting to 6 but you can't attack in on the ground because then wolves start to die and grow him. Garruk is not as broad in his removal capabilities as most other Golgari walkers but he does the most important things and he does them very well. Despite thinking this is better than the six man Liliana and Vraska I am not convinced Garruk will last in the cube simply for being surplus to requirement. That is what I quickly found with Vraska six. She was good but she was often cut for a bigger impact six drop or a cheaper removal spell. Golgari doesn't play all that much top end and has loads of planeswalkers and removal of all sorts. When a Golgari deck does pack a six drop it is usually something unique or swingy like Massacre Wurm, Grave Titan or Carnage Tyrant. Absolutely this card will not seem out of place in cube but then most six mana planeswalkers fit that bill (excluding those silly starter decks ones of course). It just won't see as much play by quite a long distance as something like a Maelstrom Pulse, Vraska 4, or any mono coloured staple. Big gold cards needs to pull you in and this does not do that. It is more of a card you play if you are already doing something appropriate. 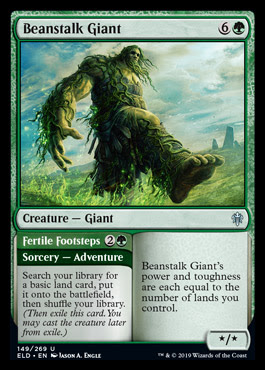 I love the design and flavour of this card. It is exactly the form you want an adventure card to take. Sadly the body is so terrible and expensive that the card is not cutting it in cube by a long shot. It should be a great fixing tool come threat in limited but in cube we need far more payoff to make a three mana Rampant Growth feel good. A seven mana do nothing fatty that is unable to evade is really not adding much. 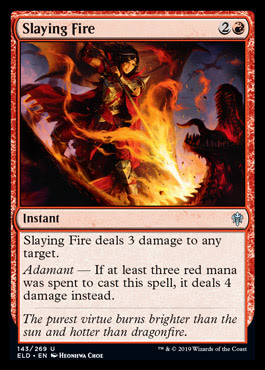 Most interesting! I like the adamant mechanic even if it the other couple of cards we have seen with it on are pretty shocking. It is just a nice clean and interesting way to tweak cards. This is basically just an upgraded Flame Javelin. Less damage rather than higher cost is a much less harmful drawback when you don't have the triple red. Three damage for three mana is not terrible and will get the job done enough of the time. Three for four damage is a decent rate. Getting affordable and reliable sources of doing four in red are relatively hard to come by. This is not much better than Char or other alternatives but it seems the most rounded, convenient and playable of the bunch and that is what you want for cube. It might just be a bit fair to see much action, red has a lot of power in the three slot these days. You might as well get some real value with your 4 damage effects and get a Torch of Defiance or Glorybringer! 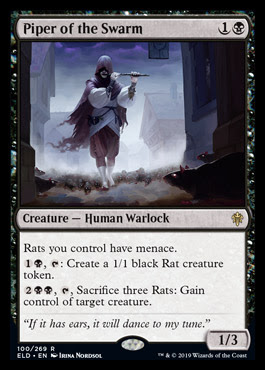 Piper of the Swarm 1

Much as I want to like this is seems super slow. Poor body and relatively weak return on the mana. The only thing I can see this being good with is Marrow-Gnawer or Ogre Slum Lord so that you can abuse the Control Magic aspect. Even that is pretty horrific and slow and likely only something worth trying in commander. It is five turns and 12 mana for this to steal something just on its own which is laughable. 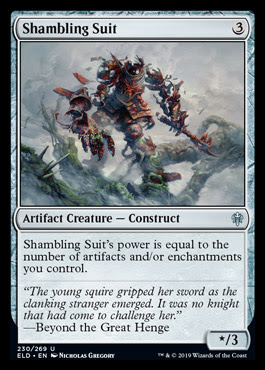 A bit boring but also potentially massive. This is a Phyrexian Walker than comes equipped with it's own personal Cranial Plating! Lack of evasion is a shame but being a colourless threat means this will likely crop up a bunch. Seems too pricey for an affinity list but perhaps a Shops deck might consider a card like this! If it gets cube action it will be a filler dork like a Myr Enforcer. 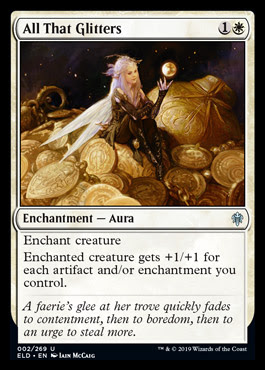 A backup Ethereal Armor. Less good being twice the price and not offering first strike. In the kinds of deck you play these the artifact boost is not going to be of much help. Even so, this is cheap, has good scaling and will absolutely see play in any singleton auras or Boggles list. 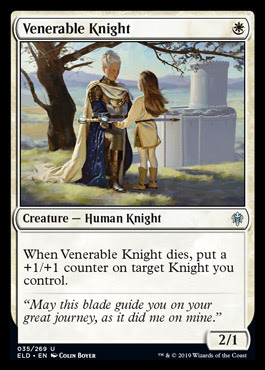 Yet another premium white one drop 2/1. While there are not many knights in cube presently you don't need this to trigger often at all for it to be better than most other 1 drop beaters. I am expecting more knights to be in the cube soon too. This is not silly good or anything, it doesn't have the foolish scaling potential of Champion of the Parish but it isn't nearly as polar either. Venerable Knight just sits among the top few white 2/1s for one. A lot better than a Savannah Lion but still ultimately very much the same ballpark for power and effect! 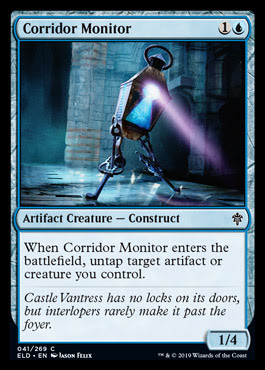 This will have some application in combo and synergy lists. An untap on a dork or an artifact and on the cheap will just make this suitable to fill a role in anything from a Birthing Pod deck to an Empowered Autogenerator one. Obviously it offers a mana reduced option on Splinter Twin too even if flash does seem far more useful. 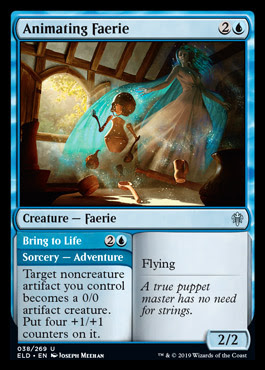 Cool though this will be for Throne limited it is no use for cube. The "value" isn't worth it as you don't want either half that much. The adventure is expensive and narrow, the creature is uninteresting and low power. This only gets a 1/10 on the off chance that I need a lot of redundancy on animating artifacts one day for some obscure reason. 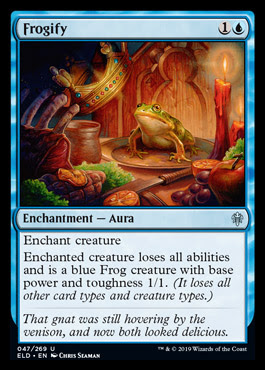 A better flavoured version of Kasmina's Transmutation. Not a bad card but not one I expect to see much play. Blue either uses removal from other colours or just bounces and steals things instead. 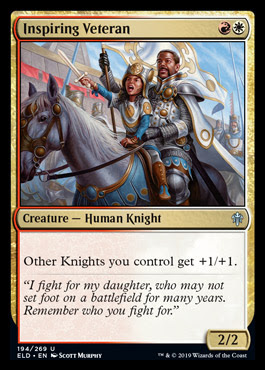 Lots of golden Bear lords cropping up these days. Makes me wonder what types they will link to which guilds. This will be one of the best cards in your tribal knight deck but that deck will not be tier one. It will probably be competitive with decent aggro and some nice scaling. Sadly removal picks apart the synergies of such things and being three colours is a consistency blow for an aggressive deck even if you can run some pretty impressive fixing lands. Will Mardu knights be better or worse than Mardu vampires or warriors? The point being it doesn't really matter all that much. 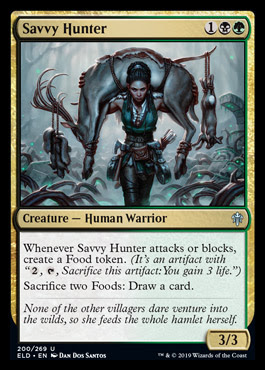 Nice card but not for cube. This doesn't make food well enough on its own and doesn't do enough in terms of board presence. In a deck with lots of food generation this will be a fantastic way to draw cards but that rather hinges on there being powerful food generators. And, even it is is viable it is still going to be narrow and quirky and not at all commonly seen.