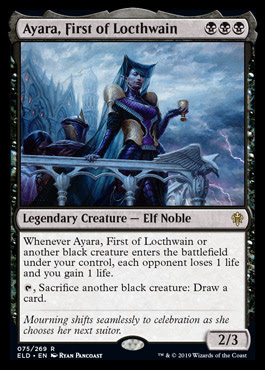 Probably a good job this isn't a zombie or vampire as it feels like that would lead to some naughty tribal abuses. It is likely going to have plenty of those already with K'rrik in EDH if nothing else. As a stand alone card this has a lot of power but as a triple black three drop it is rather polar. Better in devotion, K'rrik and that sort of thing. Great in mono black and pretty rough elsewhere. Ayara is a bit like a Corpse Knight and a Priest of the Forgotten Gods rolled into one. Really powerful in any sort of black weenie strategy where you are making lots of little dorks and have the capacity to recur them easily. This is powerful enough for cube but unless you are really pushing mono black themed strategies this isn't worth forcing as it will not see play outside of those. The cards I most want with this are Bitterblossom and Bloodghast for that ongoing drain and draw potential. As is inevitable with an improving design balance and growing card pool, the majority of the powerful cards we see now are narrower in application and Ayara is one such card. 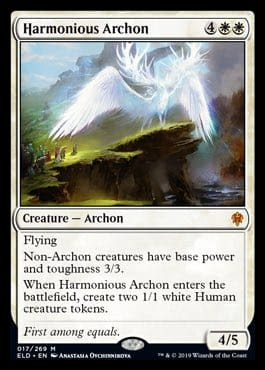 This is extremely potent and in a general sort of way but it is also very far up the curve for the places you might want it. The ideal is making this when you have a bunch of 1/1 tokens, perhaps some with +1/+1 counters, or perhaps you have an Anthem out too. You pretty much made a Dictate of Heliod, a Raise the Alarm and got a 4/5 flier into the mix as well when that is the case. You probably just win right away by attacking and the latter two parts will not even be needed! Potent indeed but expensive and possibly just overkill. Why not just run the cheaper and more convenient Dictate? In this setting Archon feels a lot like Angel of Invention which itself was a little too expensive to last in cube. It was good but it was just always one of the last cards added to lists and was too often left out all together. Angel is also cheaper and more flexible and ratehr more convenient. Archon doesn't feel great in all midrange settings either as you will not always be improving your dorks by making them 3/3s. You are also in far more danger of just empowering your opponents small army. That is probably what kills this card. Sure, sometimes you will make a big scary opposing threat small and manageable but too often you will make your opponents board better and that is no good. The goldfish floor of the card is great but as soon as you look at what your opponent has the floor on this card becomes worse than useless. Also, while 10/11 of stats over 3 bodies with partial flying is amazing for 6 mana the Archon is too easily killed and the residual pair of 1/1s is not making up enough for that loss. Really it is just about the card not reliably doing what you need it to, that isn't acceptable on something carrying this much weight. Past three mana your cards need to work and do really good things all the time. 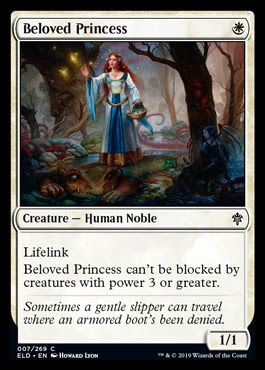 She does some things and she costs one. I am sure she will wind up as a reasonable support card in some brew somewhere down the line. Narrow and low powered but appropriately cheap! 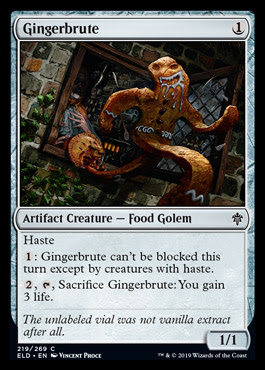 This has a good amount of synergy potential and is nicely cheap too. The power is too low for most things but I suspect there will be a couple of places where this is just lovely. It is certainly a really good tool to kill people with a Cranial Plating. Love the flavour on the evasion too, bonus points to those involved in that call. 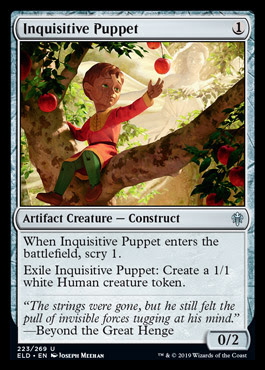 All the one mana low powered synergy cards! This is certainly the most all round playable of the lot. It is an artifact, a creature, a scry, a mini Fog, and many more things to boot. I am not sure where I would want this but it absolutely will get a whole bunch of play. It is just too much stuff for so little cost. It also covers so many areas of potential synergy, you only really need a bit of overlap and suddenly this is looking pretty perfect. 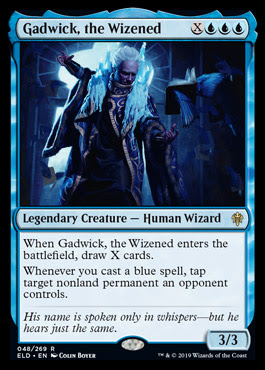 This is decent looking at almost all points on the curve which is unusual for X spells. It isn't horrible as a three drop and it gets progressively better there after. My concerns for this are nothing to do with power. The issues are that of being sorcery speed. To my mind that makes it much more of an aggro or midrange card than a control one. Control lists just want instant draw. Aggro blue decks are not overly a thing and so this has limited appeal there. With just midrange left on the table I don't see this getting quite the amount of play it needs to be worth a drafting cube slot. The tap down effect is also far better in aggressive decks, you need instants to be of use defensively but any old blue card with take out blockers which is great. I think this will be a bomb in blue devotion decks. It will come down, fill you up with gas like a nice little Hydriod Krasis and then it will use that gas to tap down stuff and kill the opponent!

Pound for pound this seems to come up trumps in most cases over Mulldrifter. The cheap mode on this is a dork while the drifter is just cards but that is the biggest difference between them and not something that is directly comparable. At five mana they are very close in power. Beyond that Gadwick leaves drifter well behind. I guess the real drawback of Gadwick compared to drifter is that you cannot so easily play it cheaply in decks that are not heavily blue. A 3/3 might well be preferable to a Divination but that doesn't matter if you don't have triple blue. The other thing drifter does a bit better than this is being cheated in and out of play. You cannot use this as a source of ongoing value with a Recurring Nightmare or flicker engine but then there are plenty of better things than Mulldrifter to do that with anyway so not really a relevant difference. Even if this doesn't make it in the drafting cube, which it has a pretty good shot at doing, it will have a decent impact in many other singleton places and will be a card people are familiar with due to the frequency it is played. This is a funny one. It is a bit like a Hostage Taker and a bit like an Angel of Sanctions. It is also a bit more like a Flame Tongue Kavu. While the body is broadly better than all of these cards with the Dragon we have a far weaker removal effect. Firstly you need viable targets. Between artifacts and humans this should be online for hitting something most of the time but it will often not be the thing you want to deal with. Then you have all the risks of giving the card back to them without any of the perks of getting to use it yourself. That is unless you have some useful sac outlet. It does have one big perk for this kind of card in that it doesn't re-trigger EtB effects and can be used to pinch something like a Snapcaster Mage without risking a blowout. This is very midrange. All told I think I would rather run an Abrade or a more effective four drop like a Rekindling Phoenix that trying to condense effects with this. It feels like the time for killing humans and mana rocks is a little bit past by turn four. Certainly a potent card that is worthy of testing. I would not be shocked if this turned out to be a decent cube card at all. It has a strong floor and a high ceiling while being pretty direct and useful, a threat and potentially removal at a good mana rate. There are a number of decent Sarkhan cards in cube presently making dragons a better card type to have around. Humans are the most common type of creature and found in all colours. The card is a bit dull in feel but it ticks a lot of boxes. 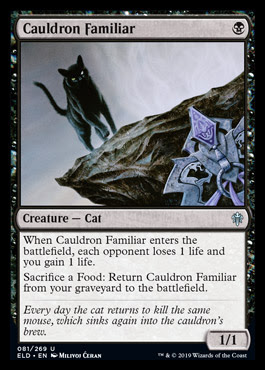 This has combo written all over it. A lovely little sac outlet and one that could be easily abused with a good food engine. A nice potential win condition for any Aluren style combos too. Too low powered for a drafting cube but a card with potential elsewhere. 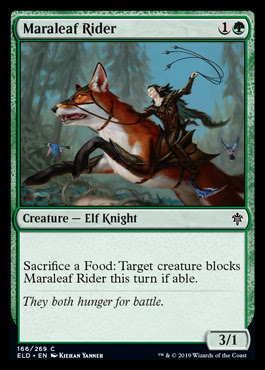 Lack of food almost certainly kills this but in ideal settings this is a 3 power two drop beater that is also a Seal of deal 3 to a dork. The idea of a Volcanic Hammer style card in green has a lot of appeal even if it has little to no chance of working out! 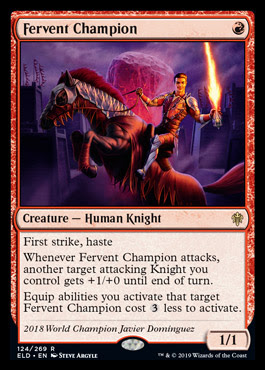 This is a whole lot of Raging Goblin. Normally this much text on a dork of such little cost is a lock in. Sadly I worry this is too narrow on too much of the text. Both equipment and knights are fairly rare in cube, especially in red decks. Without either this is just a Raging Goblin with first strike which is far from enough. While this will be obnoxiously powerful in the appropriate setting the drafting cube feels like it will not be that setting. It could be made to support it with more knights and equipment but there is a reason I have so few of these cards presently in. 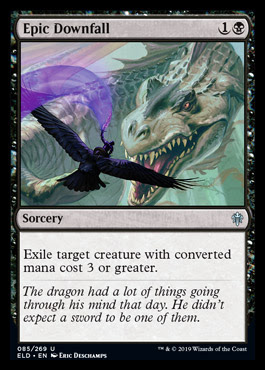 This is seemingly quite good. It is the perfect pairing for Fatal Push and is good in all the ways Push isn't. Epic Downfall gets big things and it exiles them but it is slow. Exile is more important on the bigger cards and being instant is more important for the things that are killing smaller dorks. This card is suitably pegged I think to be one of the better black removal spells but it is super close. If it didn't have exile, or cost BB then I would be ruling it out. This will almost always have targets and they will usually be the things you want to kill. The main cost of running this is that it does nothing until your opponent has had their 3 drops come online and not always immediately. This will reduce your option density in the early game and will feel like a five drop in opening hands rather than a two drop. It has that Serra Avenger feel to it basically. I still think it is well worth it to be able to cleanly deal with a serious threat and still have the spare mana left to do other relevant plays. 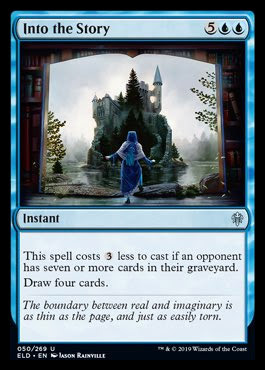 Big powerful draw but you want your draw online sooner than this will allow. Unless you are packing a mill deck that is fairly proactive I would't touch this. The seven mana mode is shocking, you have to reliably fire this off at four to justify including this. When you can afford four mana to draw cards you are pretty ahead anyway, or desperate. As such a simple Fact or Fiction will be just as effective and far less risky or onerous. 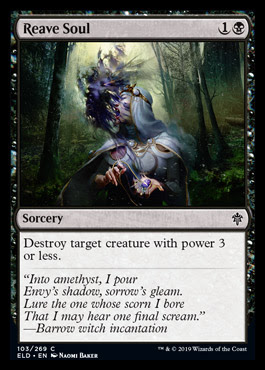 Really bad Smother alternative. This hits some more expensive dorks than Smother but it hits less overall and is also a dirty sorcery! Further to that you might as well play removal with better scaling than this kinds of restriction if you are playing cheap limited removal. A Go for the Throat not only kills more stuff but also kills scarier things overall as well.