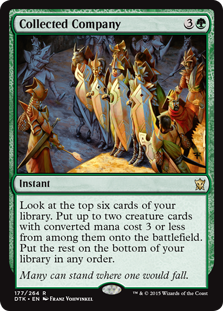 A friend of mine revealed to me that he didn't like combo decks. He likes playing good card not loads of dead and narrow stuff. Given that he is the only person to have ever build a "value" Aluren deck I should have worked it out... I love me a combo deck and feel like he is missing out. As such I have devised a more palatable kind of combo deck for him to have a go with. I do somewhat see where he is coming from, in a singleton format with lots of exile effects able to hit cards anywhere in the game a combo deck can be a bit dicey. He doesn't want to just pick up his cards because Ashiok/Gonti hit one of a couple of things in his deck.

There are numerous types of combo deck and most focus entirely on the combo (assuming it is a game winning or infinite one, otherwise it is just synergy in my books) with just a smattering of interaction and protection.  Lots of combo decks have a backup plan, either a worse version of their main combo or another different combo with some useful overlaps in the deck. For a number however the backup plan is simply being a deck and attacking with dorks. Melira Pod and all the versions and evolutions of that deck in modern is a good example of such a deck. When translated into the cube however that kind of deck (which recently did a deck tech on) has so many options and combos that you run out of space very quickly. You certainly can win on beatdowns but your dorks are mostly awkward combo ones and you have so many combo wins that your beat down backup plan is plan D or something. This list cuts all bar one of the combos from the Melira Pod list making it super space efficient. It fits neatly into a Bant CoCo shell and leaves loads of room for high power stand alone cards many of which aid the combo indirectly. This list has disruption, value, high power level, good stand alone cards and a very good chance of winning by turning sideways should the combo be off the table. This deck will stand up to aggressive decks in a longer game better than most other combo decks. It will also threaten control decks conventionally and with the combo potential making it super hard to play around.

For those unfamiliar with the modern deck the idea is to get an active Devoted Druid into play alongside a Vizier of Remedies. That interaction provides infinite green mana as the Druid never kills himself in his devotion. You then use this mana to make a sufficiently lethal Walking Ballista. Duskwatch Recruiter is a good way to go and find it should you not have it. Here is my cube list for the deck; 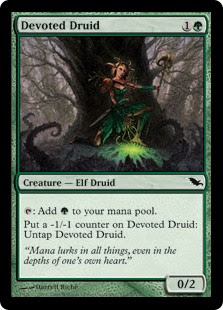 There are lots of options for this deck, it turns out Bant has a wealth of tasty creatures for three or less mana. For generically high powered things you have True-Name, Courser of Kruphix, Rishkar, Thalias and so on. No shortage on options for power! The thing is this deck is restricted by the desire to play Collected Company. As such you want mostly 3CMC dorks or less giving you far less range than usual. Preordains, Remands and spot removal all sounds lovely but all decrease the value of the CoCo. It is only one card so you don't want to gimp yourself too much by pandering to it. The trick is simply to play a range of creatures that will help out with your problems. Clique is hand disruption, Spell Queller a counterspell, Reflector Mage a removal spell and so forth. This desire to have useful and diverse effects on dorks leaves less space for the generically good things. Once you have a tool box of utility and solution dorks the various ways to tutor and dig for creatures in your list gain in value. 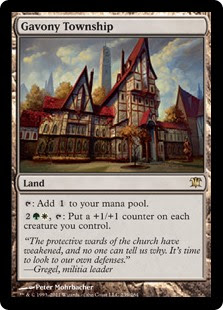 One of the main issues with keeping the deck as mainly cheap dorks is that it becomes quite hard to push through. You can stay in the game and even pull ahead but actually sealing the deal with these kinds of dorks is hard to do. The lands can help out loads in this area. Colonnade is a total bomb regardless of what Azorius deck you put it in. Gavony Township is equally dangerous in this deck and both are pretty free inclusions. Other man lands are fine too. Even Westvale Abbey could serve as an alternative to Gavony, or even as well as if you are happy with your ability to cast things. Less free inclusions would be something like a Venser, the Sojourner. He doesn't help the combo nor does he work with the CoCo. He is however a good value tool in a deck like this and a card very well able to break stalemates and even just win on the spot. Elspeth, Knight-Errant is a better and less narrow all round card that would do much the same sorts of things in the deck but this is the ideal Venser deck so it feels like a missed opportunity not playing him! 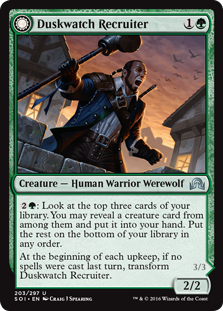 Plenty of other good support card exist, tutors like Chord of Calling are played heavily in modern lists now. Spellskite and Sylvan Safekeeper are further protection options for your stuff. Renegade Rallier is a nice way to get back discarded or destroyed things. Fiend Hunter style cards give extra removal options for dorks. The aim of this list was keeping it streamlined and minimizing the weak cards so that it can function like a good midrange deck as well as a combo deck. All the cards I mention here go a little deep on the combo, you are starting to become narrow or sacrifice power and utility by playing too many. I considered a light splash into black for Viscera Seer and ideally also a Deathrite Shaman but this is the combo player in me pulling me away from the task at hand!

I did play Fauna Shaman and Recruiter of the Guard which are both low power level cards that are of great help in assembling the combo. You need some dedicated support in finding the combo and these two are the least painful inclusions. They work with the CoCo and your suite of rounded utility dorks and they are not the worst tempo plays.While my friend may turn his nose up at these tutoring dorks I think there is little point in running the combo if you strip out any more of the support for it. You could certainly replace either of these dorks with a Chord of Calling or an Eladamri's Call but not for something unrelated to the combo. The CoCo is plenty good enough in the list I proposed and so you can afford to weaken it slightly. Only the Swords and the Walking Ballista and the lands fail to be (usefully) found by it presently! The Nissa and the Tracker are the most easily cut from this list. Neither server any specific purpose, they are just high power level, good value cards.