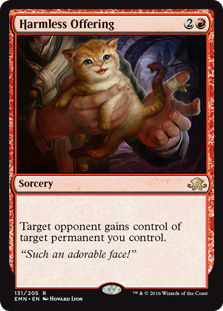 Following on from my last article of trying to find combo decks that my particular friend might enjoy we have this little number. Rather than be a combo deck housed in a midrange deck this is one housed in a control deck. While it does still rely on winning with the combo in almost all cases this is not a problem in the same way as it is with speed based combo decks. Most combo decks try and win quickly and when they don't they are typically dead in the water. They often have no means of recovering bad situations. The combo control decks, of which there are a surprisingly large number, can recover games. They can play from behind and they can deal with things. You replace the conventional control win conditions like Aetherling with your combo and you have a fairly similar deck. The advantage of doing this is winning out of nowhere, you can win quickly or just before you die should your opponent let their guard down. It costs you a little in consistency but it gives you a big edge in a lot of matchups. Other examples of combos that can easily be worked into control shells are Splinter Twin and Erratic Explosion. 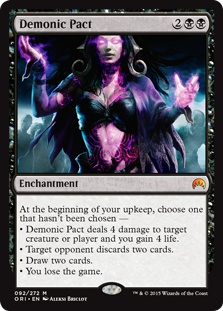 Illusions Donate was a bad cube combo. It had very little redundancy, it had useless individual cards and the combo was very slow and vulnerable. It also really struggled against people who manage to gain life as the combo didn't then win the game. All in all it was one of the weakest cube translations of a successful constructed combo deck. Fast forward a couple of decades and we have some new tools that feel like they propel the archetype into the realms of Splinter Twin quality. Harmless Offering is another Donate giving us a healthy amount of redundancy for half of our combo.

The more important new card is Demonic Pact. This works as another Illusions of Granedur except it is a far better stand alone card and a more reliable win. Donate being a weak card on its own is hugely mitigated by doubling the things it works with. Demonic Pact is actually a good control card in a lot of ways. I did a bit of experimenting with it when it first came out using it with flicker effects and in Replenish builds. The most success I had was in a pretty standard control deck with a few ways to bounce it. If you are not basically dead on the turn you pass having made Pact you will be pulling really far ahead over the next 3 turns. Having to make a 4 mana card and then wait three more whole turns before completing your combo is only something you can hope to do in a control deck. Illusions on the other hand doesn't do as much as you might think to protect you. Twenty life is nice but you have to pay upkeep for it next turn meaning your combo is either a nine mana total combo or a seven mana in one turn combo. It also doesn't kill them until they can't pay the upkeep. I have lost a number of games after Donating an Illusions away simply because they had a massive board able to attack me down from my massive life total over the few turns they had while able to afford the upkeep.

The addition of red for Offering means a three colour deck but red does help you out against cheeky players who manage to get just above 20 life. You can keep it to a light splash and you can also benefit from some nice high powered gold cards to aid you along the way. This is a Grixis control shell that uses four threat and top end slots for the four combo cards. The only other real change is a slight bent towards card draw, filtering and dig. Obviously more of such things shouldn't hinder the control plan, they should in fact help it. They will certainly help the combo element in a big way.  Any way, I am pretty sure my friend will be into this combo deck more than most as it was his idea and suggestion. He can just win with Creeping Tar Pit as his backup should that need arise! 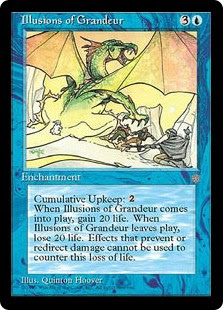 Into the Roil
Baleful Strix
Dreadbore 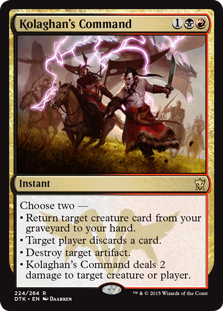 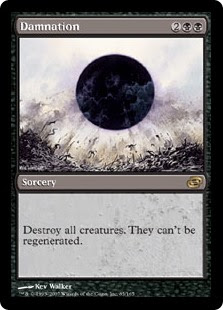 The deck is pretty standard. You stay alive, ideally you make a Pact, then you stay alive a bit longer and a bit easier. Then you Donate away the Pact when it has only the bad option left forcing your opponent to lose in their upkeep or should you fail to have found such a card, simply bounce it back to your hand and start again! There are tonnes and tonnes of options for this deck. Any removal, countermagic, draw or other control staples are easy to throw in. I would like to have some mechanism to recur my things from the bin but sadly there are not many good on theme options in these colours. Elixir of Immortality is very low value and very imprecise. This list doesn't have the mana to abuse things like Yawgmoth's Will and the various Time Twister effects are risky as well as pricey.

The Force of Will is a bit iffy in this list. Much as it is exactly what you want in control and combo decks I fear it lacks this to pitch. This list has more cards you don't want to exile than most control decks and less blue cards than most as well. This list is also a little light on big ways to refill compared to control. Short of the draw on Demonic Pact you have no cards that do much to increase your hand size. While not a big issue for the way the deck is planning to work it is more of an issue for the viability of the Force of Will. I am reluctant to cut it as free countermagic is super important if you are trying to combo off on curve with Illusions into Donate. You can't wait due to the cumulative upkeep and so you have no mana spare. Pact of Negation isn't a good option either as you are not winning on the spot. Thwart might be one of the better options! Hopefully either this or the Vizier list will appeal to my friend and let him enjoy the wonders of combo magic!