The effectiveness of removal 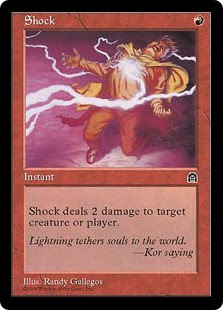 So I know I like to harp on about how over powered burn is relative to the general removal options in other colours. So I thought I would get some actual numbers rather than just drawing on experience. It is a good idea to know how much your removal is going to hit in general and this applies to all kinds of removal. It will help you build and assess its power in drafting. Removal is ever more important in cube as the power curve seems to most heavily apply to creatures. I looked at black removal as a comparison for the red removal mostly as it is much easier to numerically assess the drawback of it. White removal has much more situational and varied drawbacks on the whole. Black and red stuff either kill things or they don't and you can look at the percentages of those things. I had a little guess at how much things hit and was surprised on pretty much all accounts. I though this was just bias in my cube with it being so low curve and so I checked against the average 720 cube on cube tutor and the numbers barely changed.


Essentially I was just looking at what % of the total creatures in cube various removal spells hit. While I did account for cards like True-Name Nemesis which none of these spells kill I did not account for the value of being able to kill something really low value like a Sakura Tribe Elder, Mogg Fanatic or Blade Splicer himself but not the token. As such these numbers are a little higher than their real value would be but they still show some interesting things. Mostly that burn is indeed, really oppressive as removal.

34% of creatures die to a single point of damage in my cube. That is down to 30% in the average cube.

It is 73% of creatures that die to a Lightning Bolt in both cubes and about 82% of things in both that die to a four damage effect.

I thought these numbers were surprisingly high and I already think things like Forked Bolt and Arc Trail are oppressively good. Now, if we look at black removal we will find it has a little higher hit percentage which you would expect what with it being both more expensive and unable to hit face.

Doom Blade and Ultimate Price both hit about 80% of creatures in both my cube and the average one, again taking into account shroud effects and the like.

Go for the Throat unsurprisingly was the best of these kinds of cards hitting 87% in my cube and more like 90% in the average.

This means most good black two mana removal is on average comparable to a four damage burn at killing creatures but that is very misleading again. Even taking out cost and face potential the red removal is substantially more effective at the stage of the game you most want it to be. When it comes to killing one and two drops burn is better than black removal. With the cube being so quick and powerful your one and two drops are a huge part of the game. If red is able to just efficiently clear them out it is at a huge advantage in a majority of matchups. I was surprised somehow that Ultimate Price was quite so comparable to Doom Blade, the card always seem to jip me! As such it is a clear addition to any cube given the value of removal and the better scaling it has with the many more Doom Blade and Terror restrictions there are on black cards.

I also could have got my probabilities wrong but it seems like an Arc Trail will kill two things reasonably well over 50% of the time if your opponent makes a 1 drop and a 2 drop dork. That is just stupid. Even a Forked Bolt is not much under 40%. If I can 2 for one you and do so at a 1 to 3 mana ratio in the first couple of turns that is about as big a swing possible. Red, for my money still the best colour in cube! A simple Shock is able to outclass most non-red removal in the early game.