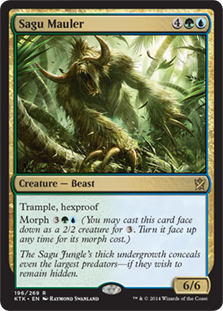 This is a classic case of application and suitability to purpose trumping raw power. On paper the Mauler is quite a bit more card but in practice it simply doesn't do enough. At a glance both are just big untargetable threats with some evasion. The Mauler looks better in almost every way here. Hexproof is more convenient than Shroud even in the combat trick light cube. The Mauler costs one less mana and has morph giving it some early game utility and the ability to start the beatdown on turn five without any ramp. The only thing the Mauler doesn't have over the Sky Swallower is flying which should be made somewhat less relevant as they both have trample as a means of evasion as well. 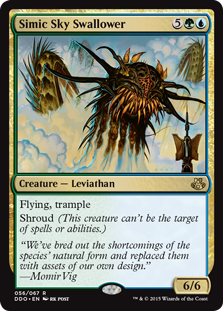 The reality is that the flying makes all the difference. A 6/6 is not all that big at all and can easily be multiple blocked to death by enough boards or simply outclassed by something fatter. Sagu Mauler is a mildly annoying fatty but it really isn't very good at finishing games. Hexproof is less value when you have to attack into everything they have with your dork to get anything done with them. With just the addition of flying you make the 6/6 untargetable trample body a really potent game ender. There are precious few creatures in the cube that can block and kill Sky Swallower. It is also pretty unheard of to have a board that can amass enough smaller fliers to group block a Sky Swallower down.

For six or more mana you really want to reliably get something out of your card, lots of value or a potent threat. Sky Swallower is a fairly reliable game ender while Mauler just isn't. Neither bring much else to the table and so you are always going to play a Titan, Consecrated Sphinx or Aetherling over Sagu Mauler. Seven is a lot to pay for a threat but it is essentially what you would have to have for Aetherling and Swallower is a better blocker and less of an ongoing cost. Swallower is sufficiently good that it is the target of Natural Order, Oath of Druids and some reanimate shenanigans. Sagu Mauler was never even a consideration for such decks and this should have been the clue that hinted towards it being pretty weak for cube. Sky Swallower is not the best value for mana card but it is one of the best suited to task which is a whole lot more important for cards like this.
Posted by Nick Nobody at 10:02