2/3s and the Decline of White Weenie 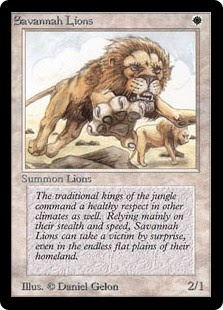 There has been an influx of high quality 2/3 creatures joining the cube ranks recently and this has had a surprisingly noticeable effect on the meta. We have Sylvan Advocate, Reflector Mage, Ayli the Eternal Pilgrim, Bygone Bishop, Jori En the Ruin Diver, Shambling Vent, Drana the Liberator of Malakir and you might as well include Stormchaser Mage in that list too as you generally have to respect the fact that it usually has two or more power. That 2/3s are a really good size to be is not new news. Kird Ape is basically the only aggressive creature in the cube that was printed in the first ten years of Magic's existence that still has the quality needed for cube use.

A three toughness creature is hard to deal with, it will survive combat with the vast majority of cube creatures and an even larger portion of the more relevant <4 converted mana cost ones. Only the very premium removal will take down a three toughness creature for one mana, otherwise you are looking at two or three mana to clear the path. All the really cheap efficient ways to deal with gribbly chaff dorks are just one or two damage, things like Fire (/Ice), Cursed Scroll, Arc Trail wont help with a 2/3. On the offensive two damage is enough to be relevant, it kills most things, all be it not as much of a % as the things three toughness survives. Two is enough to threaten planeswalkers and enough to kill the threats you might face one turns one or two. Most utility dorks also die to two damage. 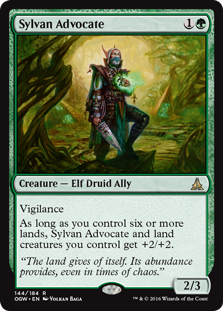 As a tempo play or board control tool a 2/3 is likely your best cheap option. Nothing takes the wind out of the sails of a 1 drop 2 drop start from an aggressive deck like white weenie than a 2/3. If they go 2/1 into 2/2 with first strike and you make your 2/3 that is pretty much a two for one right there, it is comparable to having Arc Trailed them both but your 2/3 isn't a dead card when they have no targets. Sure, they can use a removal spell to undo the work your 2/3 promised but if they are using a removal spell to kill a Kird Ape and you are in the control role you haven't done too badly out of the exchange. If they don't have removal then a lot of the time the 2/3 is better than the Arc Trail, it will still threaten to somewhat counter subsequent <3 power creatures and can be ready to go on the offensive if you need to counter planeswalkers.

Answers like Arc Trail are safer than controlling the board with creatures but they are much more situational and therefor unreliable. While a 2/3 can be answered more effectively than an Arc Trail the downside to not answering it will typically be much more severe. A lot of the mentioned 2/3 cards are much more than just the stats, only the original Kird Ape doesn't threaten to affect the game in a fairly significant capacity if allowed to survive. An Ayli or a Sylvan Advocate are tedious walls early on but as the game progresses they become game winning in their value, threat level and/or utility. 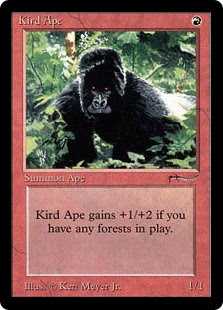 While 2/3s being more common has affected all aggressive decks to some extent it has hurt white the most. White has always relied on its deep base of high quality one and two mana two power dorks to perform well. Aggressive green decks tend to have larger dorks that don't overly care about the vast majority of blockers and make ramp rather than threats on turn one (and two if they didn't ramp into a three drop threat). Blue aggressive decks have a lot more evasion. Red aggressive decks have a very high number of removal spells that will work on creatures with <4 toughness. Black is usually a support in those other colours archetypes and is a little on the janky side when done as the main colour. There are certainly lists for black aggro decks that are shut down even harder by a 2/3 than white weenie decks but that unfortunately for them is not their biggest problem...


White has removal but it is premium, it will deal with a Wurmcoil Engine about as well as a Kird Ape and so "wasting" it on a 2/3 is really not something you want to do. White aggro decks have a much lower number of removal spells than red decks and they make up for it by being better able to take out serious threats and by having higher quality one and two drop dorks. Higher quality sadly doesn't count for a lot when you are still countered by a 2/3 and therefor fail at your primary function of hitting face. Better removal is no good if you still have to use it on the cheap stuff. 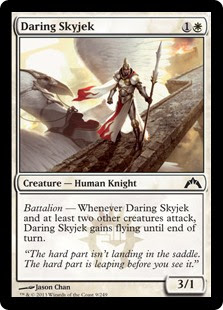 It is unlucky that white feels the effect of better creatures more so that the other colours. White weenie has always been quite a dull deck, it made up for this by winning a lot but recently this is not so much the case. It would feel weird taking out staple white weenie cards because the archetype was too weak! I don't think it will come to that, white is deep and has a lot of directions it can go. Either join blue in the evasion game or focus more on themes like token generation or equipment as possibilities. Just running things like Boros Elite and Town Gossipmonger over more classic one drop options might be a solution as well. Certainly the latter of those two has been wildly out performing expectation in the cube so far. It is not the strategy of white weenie that has become weaker, just the tools it has traditionally used. Cheap aggressive dorks with 2 power and no evasion are getting less work done and presently this hits white decks the hardest. I can't imagine they will stop printing powerful 2/3s and so white is going to have to adapt a little going forwards. To be able to prepare for this change and to test and learn about which are the best directions to go I have added a selection of cards to the cube. White has regained some combat tricks, some evasive aggressive dorks, some 3 power 2 drops. Hopefully I can add to this with more of the same plus more good token generation and more good pumping effects as new sets are released and I learn about what is most helpful.
Posted by Nick Nobody at 09:16