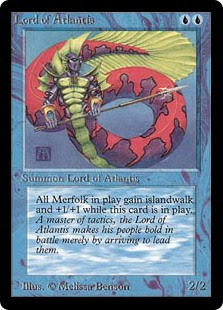 Merfolk has always been a cube viable deck and one of the better tribal options. Although they are not the strongest creatures there is a lot of redundancy in the Merfolk list including lots of things that pump the fishmen. Faeries might have more powerful individual cards but has no where near the depth nor synergy cards needed to be a strong tribal archetype. There are lots and lots of ways to build a merfolk deck. It has many weaknesses, all of which are solvable however you only have room to solve a couple before you compromise the consistency and synergy of the deck too much. It is weak to a lot of cheap removal as well as to mass removal. It is weak to aggressive decks that play high power standalone cheap threats like Wild Nacatl and Brimaz. It lacks any obvious removal for permanents of any kind and so can be vulnerable to a selection of annoying things there too.

Because there are so many merfolk that pump other merfolk they are not unlike Pack Rat, dangerous if left alone but very limp in small numbers. This means early on when you are only having a couple of merfolk out at best you are at your weakest. The archetype is not overdone with time or space for card draw effects, you can run them but I try and get card advantage through things that are also threats rather than direct draw. There are vast numbers of one drop merfok but none are that exciting, you need a couple to get the ball rolling and allow you to play multiple cards later on in a turn but because they are all so poor on their own you run as few as you can get away with. 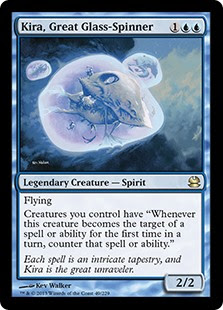 Countermagic is not a necessity nor is it a complete solution to any one thing, although it is one of the best answers you have against mass removal. Normal countermagic is overly painful on tempo to be leaving up mana for. This really only leaves you with the free stuff which is rarer and hurts you in other ways. As such I try and run just a couple of counter effects. It keeps people honest and can really help out any of your weakspots when most called upon but it doesn't significantly hurt your draws, plays and stamina.

The best solutions to lots of removal are things like Spellskite and Kira, Great Glass Spinner however neither are merfolk, one isn't a threat and the other makes things like equipment awkward. Both are viable, and against red deck wins things pretty important cards. Aether Vial helps out here as well as for tempo as it lets you play out several merfolk at once and get a lot of value from the various pump effects. It is a bit of a risky card as it is so weak past turn one and still a little draw dependent. This deck has just about enough card quality and advantage to afford a couple of luxury cards like the Vial. 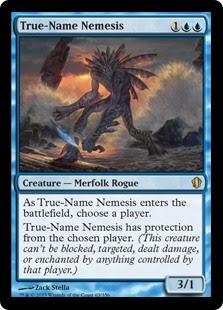 Merfolk has always had a solid base of lords and filler dorks that you can supplement with artifacts and good blue spells to get the job done in any circumstance. It is rising to the top of the pile more recently as it has gained some real individual merfolk powerhouses as well as some especially well suited support cards. True Name Nemesis is one of the most annoying three drops in the game and can win games single handedly. Master of Waves is another high powered spell that makes one of your worst matchups a lot more pallattable. Because of these cards you are able to just eat a lot more spot removal and still have sufficient gas in the tank to take down the game. Thassa and her Bident both offer a lot of utility and power and fit into the archetype very neatly. The latest addition of Harbinger of Tides should immensely help the deck fight for the early tempo.

Grand Architect is a cheeky non-merfolk card that slips in as a bonus lord when you have enough artifacts that it becomes worth it for the extra ramp. He is extra nice with Master of Waves as well becuase he also pumps the elementals allowing them to live once master has died. This list also packs a mild smattering of mana base disruption. You can go deeper on that theme but it is not unlike the counter route. It harms your tempo going hard on it and will rarely solve all the problems you need it too. You need to be able to close out games and evasion is a good mechanism to do this. As such being able to disrupt colour bases a little, up your devotion for not much mana and no cards and give yourself the option on an unblockable army later in the game is all well worth it. 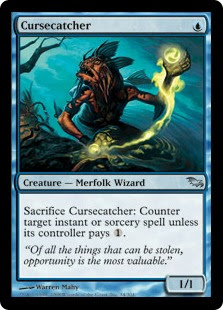 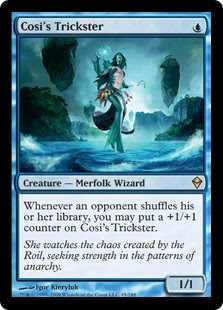 Bident of Thassa
Master of Waves 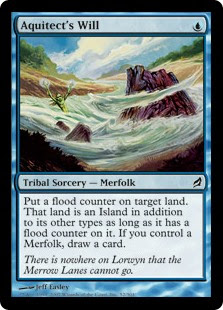 There are a lot of cards not on this list and that merit mention later. Because of the tightness of the deck and the abundant options for it you need to very focused on how you tune around any of the optional cards. This list is pretty deep on merfolk while remaining low to the ground. It is one of the most aggressive you can be using blue monsters. Rather than try and solve that much this just has a smattering of disruption. A couple of free counterspells, a couple of mana disruption cards, a Jitte and a Shackles for dealing with dorks and some ways to force through the final points of damage. The structure of the deck is not unlike a white weenie deck. It would have more one drops if there were an abundance of things comparable in power to Elite Vangaurd for the merfolk. Both archetypes can get away with softer protection because they are aiming to end the game fairly quickly.


Bident of Thassa is easily the most cuttable card in the list. Frequently you will find Opposition in its place. A card that is much more powerful and can do work right away.While Opposition is the better card it also plays into your weakness of needing lots of dorks in play. If you have eaten a bunch of removal Opposition is poor while Bident can still do a bit of work. Bident allows you for force through damage like Opposition but it also gives you a lot of stamina from the draw aspect. It is also an artifact which makes it easier to cast because of Grand Architect. 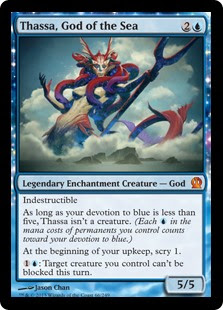 Thassa is the best non-merfolk card you can play. She also allows you to force through damage, helps greatly with ongoing card quality and is frequently a 5/5 indestructible for 3 mana. The reason Thassa is a fair card they could print is because not many decks can offer the devotion she needs to be good and not because she is at all a fair card. This deck is one of the best possible ways of getting lots of useful and quick devotion to blue and as such you would be mad not to pack the Thassa if you get the option.

Cursed Scroll is a surprisingly good card in this archetype. Little dorks like Grim Lavamancer are your worst nightmare. Jitte is an OK solution but not a great one. Scroll does what you need it to and with Architect is not even that hungry on your mana. Waterfront Bouncer is a card that has done a lot of work for this archetype (and many others) but has found itself outclassed in recent years. He is all a bit slow and costly both in cards and mana to be winning games these days. He is a lovely card with lots of cool trickery and utility but Harbinger of Tides is a lot more exciting now. 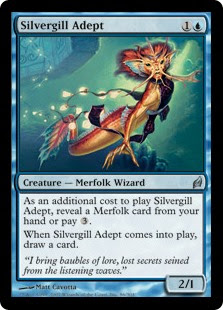 Silvergil Adept, Sygg and Cryptologist are all just filler merfolk bodies that can pay for themselves and more in terms of cards. You need bodies for your lords to be good and those that do not always cost you cards are pretty perfect. The Cryptologist does basically nothing for your tempo until you have at least one lord but is still more worthwhile to have in your deck than the generic 1/1 merfolk on offer. The deck has a lot of land and cards it likely doesn't want at certain stages of the game. Card quality is almost as valuable as card advantage. Draka Mystic is a comparable alternative that can solve screw a little easier and nibble away should you have better things to spend mana on.


Reef Shaman is a viable one drop that can assist in getting through unblocked if you have an islandwalk lord but it is pretty narrow in that role. Tidal Warrior is the better tool here as it lets you disrupt colour production for your opponent if you can't attack. Skywatcher Adept is likely the best aggressive one drop merfolk not in the deck. It is really poor as a one drop but is quite acceptable as a late topdeck.

Riptide Pilferer is an acceptable two drop that gives your opponent hard choices in what to block and allows your lords more chances to attack. Rootwater Hunter is a potential answer to utility dorks and weenies, as is Razorfin Hunter for that matter if you are into going red and taking a Jori En as well. Sadly they are a little too slow. If you are going red you can play some burn instead! Speaking of slow we have Sage of Fables and Stoneybrook Banneret. The latter looks like it might help speed you up but the reality is that you lose more tempo than you gain back from making a 1/1 you don't want to die. Most of the merfolk don't benefit much from the cost reduction and it is rare that you gain mana from playing the Banneret. 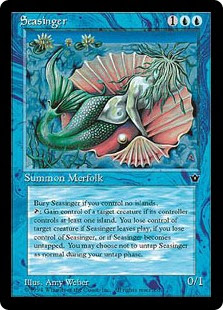 Sea Singer is another Vedalken Shackles style card. It is a bit more vulnerable and relies on you having sufficient cards that turn things into islands to use but it is also a merfolk and can benefit from all your synergies there. Sea Singer is certainly better against a green mage than a Shackles. It is always nice to be able to use an archaic creature everyone has to read!

All in all merfolk has some options and some reasonable redundancy. It is a deck to keep an eye on as it has so few independently powerful cards at its disposal. Every new one that gets printed will significantly improve the quality of the deck. Despite so many low power cards the deck is one to be feared. It is viable in a midrange cube and actually better in a powered one. Having access to blue for both power yourself and general disruption is a great place to be in a meta much more random and combo orientated.