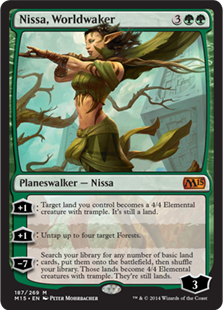 I don't get to play that much with Nissa, Worldwaker. There are lots of other Nissa cards these days and lots of five drops in green. She is a low priority pick and seems relatively cuttable when building. However when I do play with Worldwaker she is utterly bonkers. I don't recall ever having lost a game once I resolved her. She has one of the highest win rates going. Until now I was fairly happy putting this down to small sample size and good fortune surrounding her games. Now it seems like too much of a pattern, I have seen her dominate too much to just write it off. There are a lot of conflicting things going on in my appraisal of the card making it time to try and untangle them and get to the bottom of how good Nissa Worldwaker really is.

One of the things at play is my own bias affecting my expectation. While Nissa is obviously good she is also a pricier, narrower and more limited version Garruk Wildspeaker. I have a tendency to greatly undervalue more expensive or less powerful versions of existing cube cards. I didn't entertain the idea of putting Jace, Architect of Though into my cube because of how much weaker he is than Mind Sculptor without looking too hard at the card in isolation. I had to play it in a random standard event and win my first ever mull to four with Architect before I fully appreciated the card. He is now a big reason I so rarely play Fact or Fiction. Now, Nissa is a lot like Garruk Wildspeaker, they both untap lands, they both make dorks. Garruk excites me a lot more, mostly because he costs less but his abilities on paper are just way more rounded and useful. Untap two lands is better fixing and far less narrow than just forests. Garruk has an Overrun too which is pretty much the best ultimate on a planeswalker while Nissa has a rubbish one. Nissa packs a bit more punch in the dork making arena, they are larger and trample for +1 rather than -1 loyalty but it is all a bit more fiddly, you can't tap out to make Nissa and make a blocker which you can with Garruk. 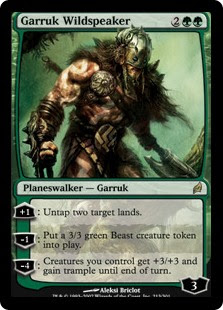 So, Garruk might be better than Nissa, so what? Garruk is one of the best planeswalkers in the cube, another comparable one should be most welcome. All this is to say I think I significantly underrated Nissa in the first place and am therefore much more surprised at her strong performance than I should be. While I still prefer Wildspeaker the stats would argue against me as to the more effective planeswalker. Garruk certainly does not win every game he resolves in. This is where you need to apply some context to the statistics so as to better understand them. Garruk is much more playable than Nissa mostly because he is cheaper but also because he has far less relevance on your land types. Further to this Garruk is played for a wide array of reasons in lists while Nissa is much more a pure threat. You will play Garruk to buy some time, curve out a bit smoother or whatever. You will not play a Nissa unless the time calls for winning Nissa style. You therefore find Garruk being cast and used in all sorts of desperate situations and decks while Nissa is only coming out when conditions are pretty exceptional for her. This makes Garruk look worse than Nissa because he is not winning as much, this is one of those times it is actually better to look at nominal wins rather than % wins. Garruk has won and still wins far more actual games than Nissa.

I don't think this is yet solved. All I have really done is justify her situation relative to Garruk. I have done nothing to show why and how she wins games. When Garruk wins games it is because of the ramp, the control or the threat of the -4. It is never from going, make a 3/3 for three turns in a row and attack with them. With Nissa she wins by doing exactly that, making a land into a dork a couple of times and going sideways. I have thought long and hard about it and I think the reason she performs quite so much above expectation, even with the bias accounted for, is a little more subtle than imagined. Obviously 4/4 trample is a tonne better than 3/3 token. Add to this the 2 difference in loyalty cost which is significant in racing and keeping the planeswalker safe while apply the pressure. Lastly we have the ability to attack right away with the freshly created dork. These are all fairly known. They should make her a bit of a better threat but much of it is offset by cost difference. Even 5 mana Garruk with +1 to make 3/3s rarely wins purely by doing just that.

Garruk Wildpseaker made turn four and just used to make 3/3s will kill on its own on turn 8 but will have done a fairly critical 18 damage by turn 7. Nissa made on turn six so as to attack right away will have done 24 by turn 8 (still 3 less than Garruk and the 3/3s) but only 12 on turn 7. Made on turn 5 and making a 4/4 but not attacking does get the Nissa clock down to a turn 7 kill for exactly 20 but as you can see, it is not raw speed of goldfish that makes Nissa outperform Garruk so much as a kill card. Yes, again, we have trample, slightly bigger dorks less time to react and this should make Nissa a bit better than Garruk despite the numbers. This isn't getting us to where we need to be, Nissa is outperforming Garruk in this aspect by a lot more than these things alone would predict. 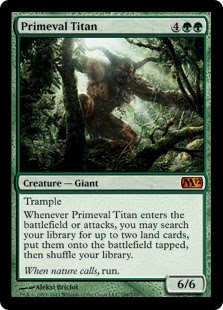 Basically I think it comes down to the dorks being actual land cards and not tokens. It turns out that either being a card, being colourless or just having the type of land makes a massive difference to really wide selection of cube cards. I won a game with Nissa once where my opponent had a useless Ugin who just couldn't do anything to stop the onslaught of four toughness colourless cards. I managed to win several games recently off the back of Sylvan Advocate randomly turning my Nissa'd lands into 6/6s. Bounce kills a beast token dead but at worst it gives you back a land in hand with Nissa. Cyclonic Rift is usually a fantastic answer to planeswalker token generation getting out of hand but again, it does nothing to calm the armies of the Worldwaker. Maelstrom Pulse and Abrupt Decay can't touch them. Even a Declaration in Stone can be played around fairly easily such that it only hits one of your lands and leaves you with more 4/4 tramplers to ruin face with.


A second subtle reason Nissa works out very well is that she has an element of Primeval Titan about her in that they can do two things well in two kinds of deck. You can use them as top of the curve threats or you can use them as good midrange things that bridge the gap really well to your actual top end stuff. If you don't have those 7 and 8 drops in hand then these Nissa/Titan style cards will do good work on their own but when you do have them they come down faster and pose much more of a threat.

So yeah, Nissa is good. She is one of the best planeswalkers in terms of being an awkward threat to deal with as well as being able to close a game. She is more of a pure threat than most other walkers but the untap, even when only for a couple of lands, adds a lot to her flexibility. She is very robust and allows you to diversify your threats without over extending into too much. You can play her at the top of a deck or in the middle curve wise and she performs equally well. Simply being able to make a threat that is a planeswalker and a threat that is a land at the same time makes life uncomfortable for the opponent and is a unique ability to date. While Nissa is very good indeed, top ten walkers for sure and only just outside the top five, her results do paint her in an incredibly favourable light that you need to see through. When you play her at the right time in the right deck you will be made of winning. Play her in the wrong deck and fail to engineer the right situation for her and she will put in a disappointing display.
Posted by Nick Nobody at 07:31