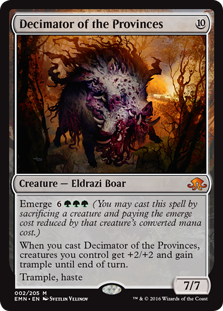 My initial review of this card was based on my total lack of knowing the actual rules of the game. I had assumed not only that the +2/+2 would affect itself but that you could also reduce the green mana cost in the emerge. I thought that if you sacrificed a Woodfall Primus the Decimator would cost G rather than GGG. This all makes the card a fair bit worse than I thought but then I thought that the card was bonkers. I thought it was  a fairly comparable game ender to Craterhoof Behemoth while also being a viable card to play in decks without ramp.

Having played with and against it a bit and found out how it actually works it is still a fine cube card and worthy of a slot. It does still fit in both the Craterhoof role as well as the role of a punchier Creeperhulk for the lower curve lists. What it isn't is the on the spot game ender I had envisaged. It will almost always do damage and invoke a huge swing and it should leave you in a good position. This is only when you are a reasonable position to begin with. Should you be too far behind you will get blown out hard by a lot of things or simply not do enough to merit your investment. There is a place for Decimator in almost every green heavy, creature heavy deck but he isn't an auto include in them, he is just an option from a selection of comparable cards. Craterhoof is still the undisputed king of dorks that are both playable and that have exceptional odds on ending things.

While Decimator brings a lot of utility to the table it does come with a cost. Paying a full blown 10 for it is hard to do and not great value. This means you really want to sac a dork, this is fine if you have loads of chaff and loads of mana which will be the norm however it will hurt when you have to sac something relevant. You pay for convenience on one had with inconvenience on the other. The card is probably a 6.5 rather than the around 8 I likely gave it assuming it would sit alongside Craterhoof. One thing I am excited about as a result of this card is trying out a stompy deck again. Mono green aggro has always been a thing you can do in cube but not a great thing to do. Decimator brings something somewhat new and powerful to the table that could put stompy back on the map. I love the idea of sacing my Vine Dryad off to this! 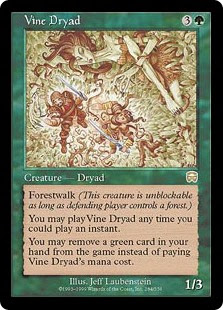 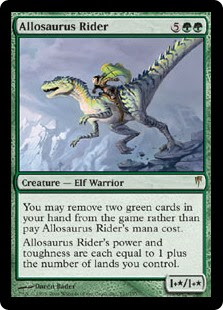