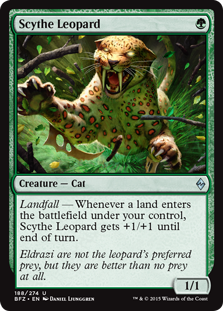 With the release of the second Zendikar based block we have been given a whole new pile of landfall cards. The more of something you have the more worthwhile it is building synergies around it. This deck was a test to see if landfall is a cube worthy way to go. It is essentially a Naya Zoo deck and aims to win in a similar sort of way. It is padded out with all the good landfall cards and some of the weaker ones. Most of the landfall enabling comes from the high quantities of sac (or "fetch" if you hail from across the pond. I'm sure they were always called sac lands but somehow fetch seems to now be the wording...) lands. There are a couple of other strong cards that have some land based trickery and there is a smattering of those too for good measure.


A deck like this trades raw individual card power for potential scaling synergy power. This is harder to do in cube as with only single copies of cards you need a lot of redundancy and depth of playables to make it work. This deck has both of those things however you have to get an awful lot of power back from your synergies as well as having them be incredibly consistent for cards like Snapping Gnarlid and Makindi Sliderunner to be better than Tarmogoyf and Scavenging Ooze. Over the ten years I have been cubing there has been a consistent trend away from heavy synergy decks and towards generally powerful well suited cards. Going into the games I had very little illusion that this list would outperform a classic good card zoo list. 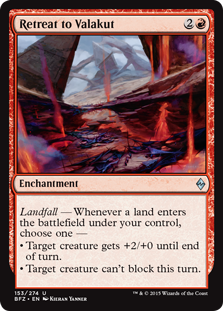 Another sacrifice I made while building this deck is in the land count. Normally I would only go 17 in this kind of deck however most of my cards become awful if I am not making at least one land a turn. Going up to 18 seemed the least I could do, with 2 more sac lands than I normally run as well the mid and late game odds of drawing lands are not really improved.

On the topic of lands the new "battle" (awful name, we can do better community!) lands greatly improve this style of deck. By having more targets for sac lands you can play more sac lands. With more of those targets being dual lands you can more reliably cast your stuff. All good. I still wound up running two basics leaving me 10 fetch targets total although only Wooded Foothills can find them all. More sac lands is viable and would have been nice but I also wanted to play some spell/man lands so as to offset the high land count with some mid to late game value. 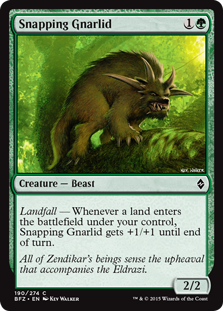 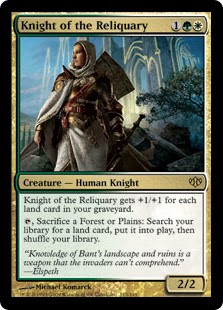 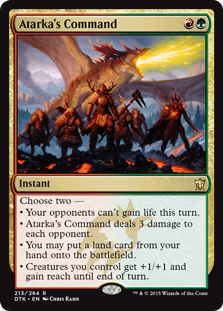 Knight of the Reliquary, Atarka's Command and if really needed Path to Exile can all be used as ways to get and instant landfall trigger. This made the deck very scary to block against, you never knew how big everything was going to wind up. The list isn't overdone with burn or removal, the hope is simply that you have the tempo lead and that all your guys are bigger than theirs! Provided you can find the lands then they usually are. There were many more good landfall enablers however this being an aggro deck you want to focus on the threats first. Skyshroud Ranger is only good in a very ideal situation, otherwise it is a 1/1 non threatening card. Courser of Kruphix is always a great card however he isn't that aggressive for a three drop and is only marginally helping you with your landfall triggers. There are loads of potent combat tricks as well but they come after both threats and removal in terms of priority and so basically none of the outliers got a look in.


The deck performed decently overall but the consistency of good cards zoo is better. None of the non cube cards in this list will be migrating into the cube as a result of this deck. When this deck performed well it stomped very hard indeed but it was overkill. You don't need a deck to perform that well. People only have 20 life and so being able to deal 40 damage total on turn five is not that much more useful than being able to do 25. You are far better off trading some of that top end potential for low end consistency which goes a long way to demonstrating why individual card power is typically trumping deck-wide synergies in the cube these days. 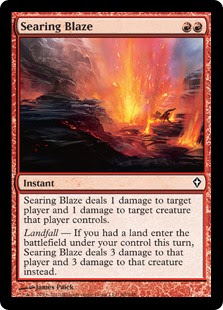 Retreat to Valakut and Knight of the Reliquary were both surprisingly scary in the deck. Knight freely gave you two instant landfall triggers a turn and represents a serious threat himself pretty quickly. Retreat was somewhere between Perphorus and Opposition and was the most standout of the niche cards used.


A ramp version of this deck was considered as it lets you use some significantly more powerful landfall cards like Avenger of Zendikar and Rampaging Baloths. If going this route however you miss out on all the cheap aggressive monsters which are the most brutal. A one mana 4/5 attacker is substantially better than a six mana 6/6 trampler with some 4/4s thrown in. There is no better aggressive one drop than a Lynx that you reliably get to trigger twice a turn. Baloths and Avenger are powerful without needing to focus landfall while Steppe Lynx needs the support to be abusive.
Posted by Nick Nobody at 09:53