A different sort of Goblin deck 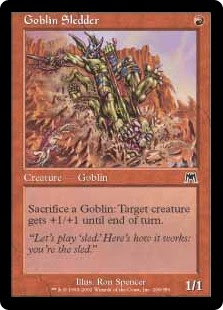 Goblins has been a top tribal deck since the creation of my cube. The further back in time you go the more powerful a cube archetype goblins has been until you go past Onslaught block. In present day the powerhouse that is Goblin Piledriver is not quite as broken as they used to be. Goblins used to be an aggro deck that was good because it had powerful synergies and card advantage potential. Now it isn't really an aggro deck and is more of a midrange creature deck with combo like potentials. That is classic goblins build with Matrons, Ringleaders, Lackies and Recruiters. It is certainly a viable deck and lots of fun but it is easy to disrupt and probably a tier two deck these days.

This is a new build of goblins inspired by similar decks in standard and the impressive power that Purphorus offers. This very much is an aggro goblins list. Rather than try and cram all in the goblin tribal synergies into one deck this just focuses on a couple of the more aggressive overlapping synergies and maximises them using much cheaper cards. You might argue this is a token deck and not a goblin deck, in red there is little difference it seems. Young Pyromancer would be fine in this deck, he is a good cheap card and works with half the synergies of the deck. However you name it, this is roughly how to build it. 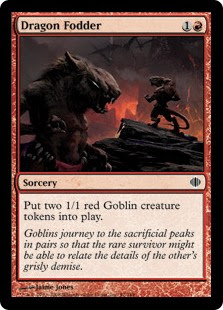 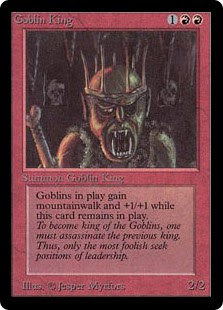 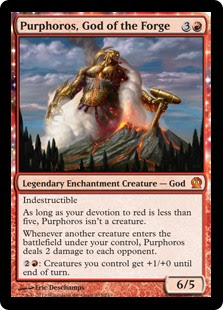 This is more like white weenie than any other deck in the cube. While it has some reach in the form of direct damage they are more intended as creature removal cards. The main way you win with this deck is swarming the board with little goblins and then pumping them all with a lord. Perphorus is the Armageddon style game ender, although they do very different things they are both pretty much four mana spells that win the game if they are successfully cast on cue. Mainly Porph is ongoing unstoppable damage but he has loads of utility. The pump effect is expensive but does a surprising amount of work if you much of a board at all and not infrequently becoming a massive indestructible dork is also rather nice!

Impact Tremors was just something I wanted to try out. While it was fine in the deck it is far too narrow to deserve a cube slot. I think the deck might just be better off playing a powerful standalone card. The previously mentioned Young Pyromancer seems a good fit. One damage per dork simply isn't game ending in the way Perphorus is and taking an early turn to lay it instead of applying pressure doesn't always seem good. 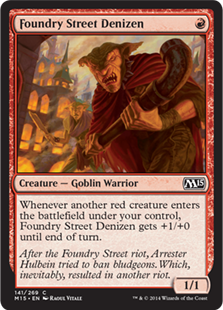 A few of the cards in this list are extra good. Foundry Street Denizen is possibly the best one drop in the deck. It seems to swing for an average of just below three and I have seen it swing as an 8/2 on turn 4 while backed up by Chieftain and Krenko. Other than the Guide most of the other one drops are not very exciting at all until you have built up a pile of sacrificial goblin tokens. They might nibble in for a few damage, they might just end up horribly dying. Bushwhacker and Loyalist vastly improve your combat and do some quite disgusting and unexpected damage. Frenzied Goblin on the other hand is pricey and rather inconsistently useful in this deck and likely the most cuttable card after Impact Tremors. Fanatic isn't exciting either but he does help your synergies as well as your removal suite.

It is hard not to include Siege-Gang Commander in a goblin tokens deck but I was trying to keep the curve low. Krenko is far more punishing if he has haste or he is not removed and so I elected for the cheaper high variance legend. Compared to white weenie this list has some strengths and some weaknesses. It is easier to disrupt, the pump effects are found on the back of 2/2s rather than on enchantments. Individually the creatures in this deck are also a lot worse than those in a white weenie deck. In the goblins favour however the deck is quicker and has much better reach. Good fun and a little bit different but only a viable drafting cube archetype if you already support tribal themes. Cards like Goblin Sledder are not good enough in the cube without significant tribal support.
Posted by Nick Nobody at 08:04