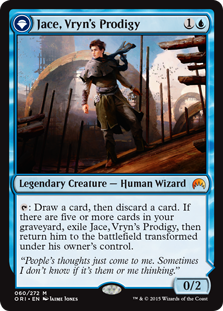 Since the release of Khans a new base blue/red archetype has arisen that uses a core of Tarkir cards. From this base come Grixis delve and Jeskai prowess. I plan to do a feature of both forms of this deck but in reality they are very similar. They heavily abuse the interactions from potent creatures and lots of cheap spells. This is the Grixis version, it is focused more on delve than prowess (as the names might hint at) but uses very similar cards to the Jeskai versions to get there. This is a slightly more control version than most of the Grixis Delver that is usually done in cube but it is intended to simply represent the most powerful options you can go with in a sensible looking list. There are loads of great cards I had to leave out. That is always the way with three colour decks and goes some way to explaining why generic three colour good stuff decks are king in cube at present. At least of the 10 options on three colour decks the ones with an Izzet component seem to be the best. 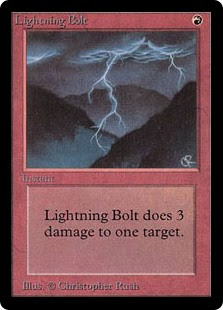 What I love about this deck is the ability to flip flop from aggro to control with ease. Everything is cheap and most  things give great value allowing you to easily gain tempo against most opponents. The card advantage and trickery of the deck however allow you to go long without any fear of doing so. The biggest weakness of the deck is that it is quite threat light. You don't have enough burn to get you there and you are thin on dorks as well, most of them being smaller utility ones. If you don't get a Delver, Swiftspear or Pyromancer to stick in play early and do a reasonable amount of work then it is a lot harder to close out a game. This is a weakness of the modern version of the deck but the cube one has has another due to only having single copies and 40 card decks yet much better card draw options. Simply put you will come close to decking yourself so much quicker than other decks. Cards like Dack chew through libraries and can run your library dry before you are into double figure turns. Mostly this is fine, it is not like you want to be running Elixir of Immortality in this kind of deck. You should be able to win a game when you see that many powerful cards so quickly. Every now and again though you will find decks living and you have to tone down the draw a bit so as to have enough time.

There are three delve cards in this list which is too many for most decks in cube. You need Tasigur to up the threat count and because he is nutty good. Gurmag Angler however doesn't really offer enough to strain the delve further. The reason I am happy to play both Dig and Cruise in the list is the massive amount of looting. It means I can hit one consistently earlier and then I can throw one away if I don't have the graveyard, library or be in need of more cards. You need one and you really want it on cue so playing both seems best. 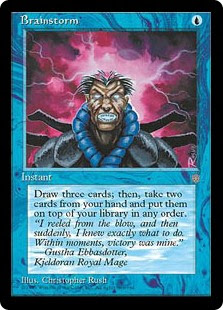 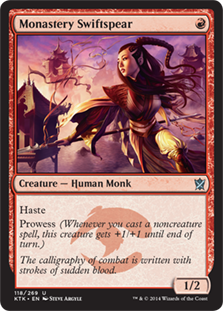 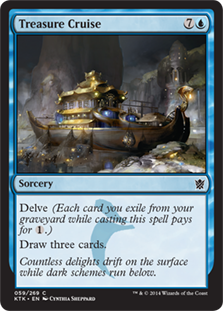 The strength of the deck is that it is full of cheap and powerful cards. Most decks that run lists as cheap as this one will be playing a significant quantity of weak redundancy cards like Elite Vanguard and Lightning Strike. Not to say these kinds of cards are bad at all, they just don't compare to the things this archetype gets to run. This list has several one drops that can basically win a game on their own. This deck has the mana curve of an aggro deck but so many of the cards in the list are two for ones that control decks play. This list will force through a win that it had no right doing. You will see games where it is behind on the board, mana and cards and facing down something it can't really deal with effectively like an Aetherling, a Batterskull, a Jitte etc. and just through casting more spells that are powerful and cheap and doing useful things it can create a window and suddenly steal a game all the while looking completely dead in the water. 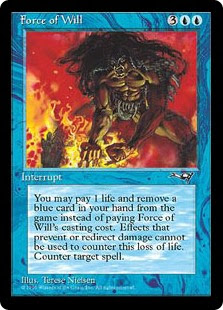 Countermagic is good and powerful but I prefer to play a lower count than most in this deck. Abbot of Keral Keep is a bit like Bloodbraid Elf in terms of not wanting to play it with countermagic if possible. Crypic is a great exception for both! I find I get better use from my mana when I am not playing with much countermagic. If you are sans Abbot then two or three of the most suitable counterspells is all I think you should want. Force and the one mana ones offer great tempo and harm your curve least. Remand and Arcane Denial are fine but getting on the clumsier side.

Thoughtscour is not commonly a maincube card and is easily replaced with one of a wide selection of cheap one mana card quality effects. After Brainstorm all your most powerful options are sorcery which isn't a huge deal but does offer less powerful interactions with your prowess cards. I love an Opt in this list! Sadly the two mana instant options are just a bit pricey for how this deck wants to operate. Ideally you found a powerful two drop you can make with your one mana card quality spell. When most of you "game ending" threats cost two or three mana you are hurting you tempo too much by trying to play cards like Impulse. 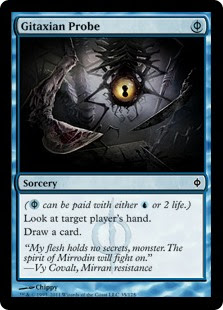 Gitaxian Probe is disgustingly overpowered in this list. It is a free prowess trigger and a free mana for your delve spell. It is a cheap way to pull out of a screw by allowing interactions like usefully playing a two mana Snapcaster Mage. It improves the blind consistency of Abbot and the flip rate of Delver, all pretty much for free. This is all ignoring the "main" effect of the card which is to have a nice old look at what your opponent has going on for them. Perfect information for a turn.....for free! In a deck like RDW perfect information is nice but it isn't anywhere near as significant as it is in a deck like this which is full of options and utility. Probe is so powerful in this list I actually think Peek might be better than Opt! In all seriousness thought, Gitaxian Probe is aguably the most powerful one mana spell in this list for this list, that is a deck with Brainstorm, Lightning Bolt and Thoughtseize. Information is useful in all decks but in a deck packed with trickery and utility that same information becomes almost priceless.


16 Lands is an awful lot of lands for a deck with a curve this low and as much draw and cantrip effects as it does. You could get away with 14 lands in this deck and not feel like you were getting screwed every game. In my experience, when using this much looting and card quality effects you are better off playing slightly more lands than slightly less. This is a pretty safe rule in magic generally to be completely honest but I do take it a bit further with this list. It is a lot like the reason you don't play impulse. If you are forced into playing a turn two Preordain or something to find a suitable land drop or just ensure you are having a viable turn three then you are losing a lot of what makes this deck good - options. You want to have the land consistently early to give you the most chances to cast everything in your hand as soon as possible. You want to be looting away lands and not threats, you are already threat light and are likely to need most of your action. 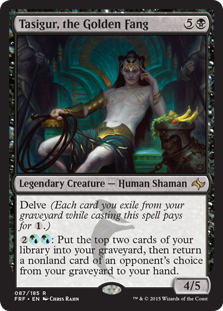 Playing the deck isn't easy and each matchup is different in how you need to do your things. You want the tempo advantage but once you have it there is little need to extend much beyond that. It is nice to just nibble away at your opponent while holding onto some great cards. This you can only really do against midrange and control decks which are by far your best matchups. RDW, white weenie or a good old Zoo deck are much harder work to beat, you are almost always forced into the position of control player at some point in the game but lack the mass removal and lifegain to do much more than steal a game once in that position. Despite being your weakest matchups the aggro decks are very beatable still, if you just go toe to toe with them the fact that a lot of your cards are two for ones means you will come out on top. This isn't one of the best decks in modern, cube and vintage for nothing... It is brutally consistent, more so than a RDW or white weenie deck by a mile which is why the deck performs so well. If the white weenie or RDW draw well it is hard for the Grixis delve list to win but if it stutters at all the Grixis deck will quickly punish it. Because of all the card quality/draw, great mana and cheap spells you are about the most consistent deck in cube. The deck is as good as it's mana base, and that can be truly excellent.