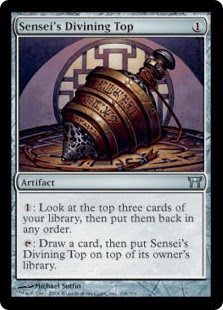 After my Cad Bloom article I got to thinking about what the other most complicated decks in the cube are. My general conclusion is that anything with Sensei's Divining Top, Scroll Rack, Gifts Ungiven and other tutor spells tend to be the hardest, the more colours and the cheaper the spells the more taxing too. I haven't built this deck in a while but remember the cube version being one of the hardest decks I have played, it being based on an old extended deck which was also the hardest competitive deck I have ever played. Having played it now the Cad Bloom deck felt more taxing but this is a better deck very fun to play as well as being a meaty morsel to sink your mental teeth into.

For those interested about the extended version of the deck a list and article about that is here. 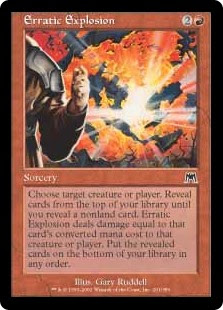 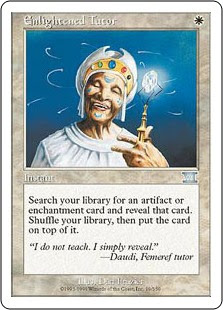 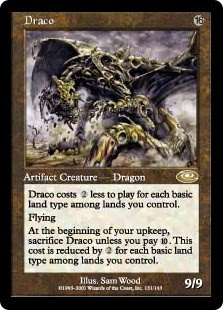 
I always get mana bases wrong  in the complex decks and should have played the third sac land and a Seat of the Synod instead of two Islands. The Lonely Sandbar was also perhaps a little greedy but didn't ever cause me trouble. The last time I built this deck I seem to remember playing Trinket Mage, Zuran Orb (plus Balance) and Engineered Explosives as part of his package. Not going for that in this build and playing against Pernicious Deed made me think twice about including artifact land but I think at least one to be able to tutor up is well worthy. 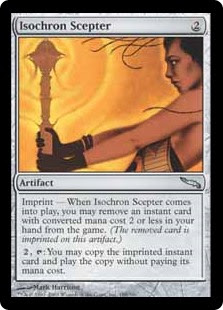 Draco Explosion may be built a number of ways, the most significant difference is swapping white for black as Vampiric Tutor and Imperial Seal are better than Enlightened Tutor. I guess you could also use green as the third colour. The problem with Draco Explosion is that it is a pretty terrible combo as it doesn't win you the game. As such I have never really spent much time being decks designed only to do that and always add another element to the deck. If they print a card with converted mana cost of 20 or more (or I put in unglued cards and have "Gleemax Explosion") then ~name of that card~ Explosion would be a viable combo deck with no other aims. A good way to build Explosion decks is to use Emrakul instead of Draco and play Show and Tell and Sneak Attack but in such builds explosion is very much a secondary aspect of the deck. As for the inclusion of Isochron Scepter and Orim's Chant there is much to say. The two combos seem at total odds to each other, one trying to end the game instantly while the other tries to lock the opponent out and control the game. The reason this works is because you basically include no extra cards to incorporate the combo after the Scepter which has great synergy with a lot of your spells any way. Either of the combos alone is pretty fragile however making a deck that can cope with both is pretty tough. Orim's Chant is either a Duress or a really good counterspell if you wish to go off with Explosion and would be worth playing without the Scepter. Most of the time you use the Scepter Chant combo is to buy time to assemble the win via an Erratic Explosion a little like the use of Moments Peace in some combo decks but a lot more effective against all sorts of archetypes. Even if you do manage a hard lock with the Scepter Chant combo most of the time you will still be winning by using the other combo as the number of win conditions in the deck is very low and there is no way to make another Scepter to burn them out while locked down. 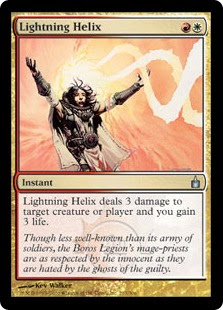 The burn and the creatures are all dual purpose in the deck. The burn spells buy time by controlling the early board when required or are used to deal the additional damage to kill someone beyond the 16 from exploding Draco at their face. For this reason I should have perhaps played either Vapour Snag or Burst Lightening over the Path to Exile which is the narrowest card in the deck. Meddling Mage and Spellskite are to protect the combos, the Skite is also great defensively and Meddling Mage can sneak in a few vital points of damage. Snapcaster is as outstanding in the deck as he is in most cube decks and offers your deck a great deal of extra longevity and utility and is even better than Meddling Mage for sneaking through damage. Delver of Secrets offers less utility to your deck but is so cheap and easy to get in damage with while also having the greatest total stats of all the dorks in the deck and being so easy to flip he seems to merit his slot. He is just about viable as a win condition if they are Scepter locked and is definitely the best non-burn way to get through the remaining damage needed to kill with Explosion.

All Moxen are great in this deck as your spells are cheap and you need a threshold of mana to go off in any way and so they do more than time walk you if made on turn one. Crypt served me well in the absence of other Moxen despite seeming to have terrible synergy with Scepter Chant. You do not need long to assemble what you need in this deck and will tend to win from the extra mana well before the life loss is an issue. Starting a Scepter lock two turns earlier tends to save more life than the Crypt will deal all game. Into the Roil is a nice cover all out spell which is necessary without things like Engineered Explosives and useful even if you do. Jace was rather a luxury that I felt I could support due to playing the Mana Crypt. Brainstorm is a key spell in the deck but at four mana the redundancy for it from Jace is not worth it alone. Being able to use Jace as a win condition, card advantage, a speed bump, removal and to be able to reduce the odds of them drawing the few cards you really despise like Disenchant or Zuran Orb together all make Jace a reasonable inclusion. He also makes many of your early game choices easier as he is one of the most obvious targets to imprint on Chrome Mox or reshuffle into your library. Timetwister and Mystic Retrieval both help make the deck more robust and increase its longevity. The Retrieval was the last card I put in and was pleasantly surprised by its effectiveness. I think it would be unplayable without the Crypt again but offers a lot more control than Twister and doesn't exile things as Sanpcaster does. Twister both recurs key cards you have used and refills your hand which can very quickly empty and is pretty essential in the deck. The rest of the deck is pretty self explanatory library manipulation which is good in any combo deck and essential in this one, the Scroll Rack and the Brainstorm in particular was they allow you to place Draco where you need him if drawn. 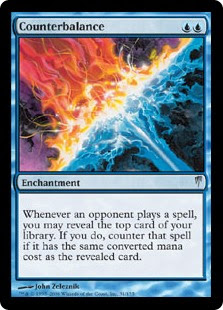 I considered playing with Counterbalance in the deck as most of the cards you use to manipulate your library are already in the deck. Without any other counter magic or an even distribution of converted mana costs it seemed rather optimistic that it would do all that much and just waste time in casting it and trying to get value from it. In a more controlly build of the deck, perhaps just without the Draco aspect, Counterbalance would work far better.

Cards like Draco and Erratic explosion are the most narrow of cards you could have in a cube however the two card combos do not pollute cubes all that much compared to incorporating a whole combo engine. To keep the draft cube formats interesting I like to have a few pairs of combo cards such as these and things like Illusions of Grandeur and Donate. Most of the time they are last picks and even when used end up in tier two decks but it does keep options open and allow for some good fun. I have played cubes where pretty much all you can make is combo decks and those end up with the silliest games and decks.
Posted by Nick Nobody at 11:51