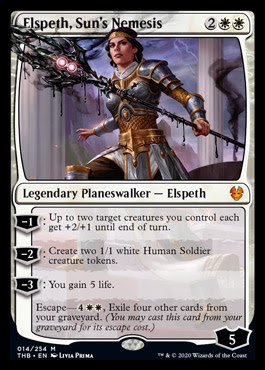 She is back and now she is all pissy with Heliod! Is she still good thought? Seemingly not as good as she has been in Sun's Champion or Knight-Errant modes but also still plenty good enough for cube I would say. Her inability to grow in loyalty is somewhat offset by the escape mechanic but also just by the relatively hard hitting nature of the card. Four 1/1 dorks and a pump or a pair of 1/1s and loads of pumps or even just pumping all the way will get quite a lot done and is worth the mana cost. The lifegain will win some aggro matches but otherwise will not be that interesting or exciting. It makes the card better despite being a pretty weak option. Overall this is an aggressive card that you can reasonably happily run in midrange or control builds. It defends itself well and affords a good amount of pressure, options, tempo and value. It lacks the reach of either of the better Elspeth cards which is her main drawback. Power wise I think she is comparable to Serra the Benevolent. The recursion is certainly nice. I would possibly rather a +1 on the pump but it is quite close either way. It just lets you pay mana for loyalty, assuming you have the cards to exile. It also makes you less precious about discarding, milling, or just getting her dealt with. What it is not is a good deal, paying six for this walker is substantially below par. It will still often be good but it is not high power. Interesting, flavourful and probably about right for where you want to peg a card like this for power. Not oppressive but nicely playable. 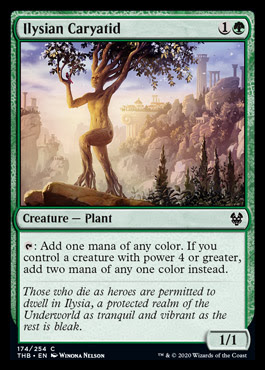 Too vulnerable for the cost. The upside is nice but not worth much. I want my green two mana ramp to have immediate upsides and perks on the one mana options. Sadly I prefer Utopia Tree to this... 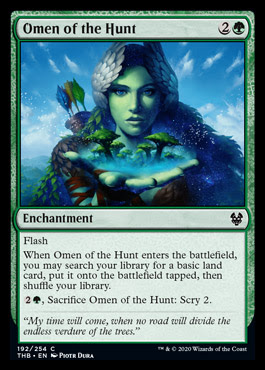 Omen of the Hunt 2

Flash keeps this on the table. Three mana ramp in green really needs a lot of upside for which flash does not get it done. Double ramp is the sort of thing we are after. Having some interesting support options from card type to scry to flash means that if it ticks enough boxes for a build it might creep in to some exotic builds as a low power but high suitability support card. 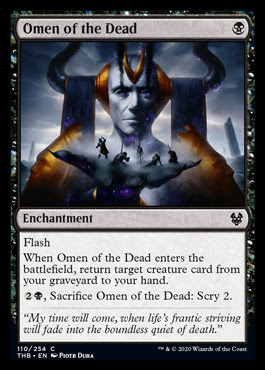 Omen of the Dead 4

This does a lot for low cost. The only downer I see on this is that it is not something you can just flop out early. Yes, mostly this is just a Raise Dead but it does have a lot more going on which for a one drop makes a big difference. Scry is always good even if this is mostly at mana sink/desperation rate. Flash is also lovely but mostly it is about the type and being a card that stays in play. Doom Fortold decks will love this. Devotion decks will love this. Potentially even something for Enchantress decks that stray into black. A little situational for the drafting cube but a solid support card for a lot of builds otherwise. 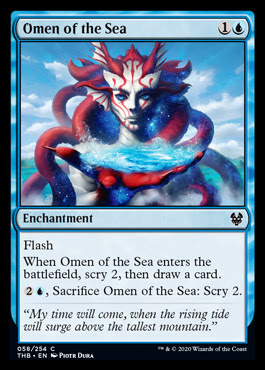 Omen of the Sea 8

Now this is very exciting. This is Preordain at instant speed on the face of it which is something I am happy paying two mana for. It is certainly comparable to Anticipate at that which is highly playable. On top of the great floor this has all the lovely perks of being a permanent, an enchantment, and offering some bonus late game scry. It is not all upside for blue however as there are lots of instant and sorcery triggers in blue and often you want to fill up the bin early. While the perks of being an enchantment in play are not offsetting it not being an instant in the bin exactly it does give the card a nice degree of scope. It will be more suited to some places that others which is really what you want in the game. Directly better cards are not interesting but this absolutely is. There are times this will be better than Preordain yet there are also those where it will be worse than Anticipate. A great little card to flicker, bounce or just sacrifice to something. If you make that aspect of the card count for much then this quickly outpaces the competition. Lovely to have more high value cheap cards to play in control decks where the instant speed is so much more important. The cost of the scry is actually lowest in a control deck where you can reliably represent a counterspell. Often enough it is correct to do nothing into open mana in a deck rife with counters. As a control player facing that line of play having anything useful to spend otherwise unspent "countermagic mana" on is a huge win. This will get naturally sacrificed in control decks surprisingly often. In that regard it is a better Witching Well. You get card parity right away, you don't have to tie up mana at sorcery speed and the sacrifice cost is lower. Certainly five mana for scry 2 draw two sounds better than it does for scry 2, draw 1 scry 2 but I am pretty sure Omen is the better card because of how it is balanced, the value of getting more upfront basically. 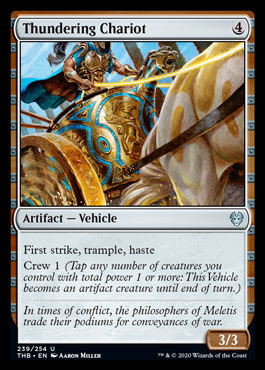 Too small, expensive and fair. 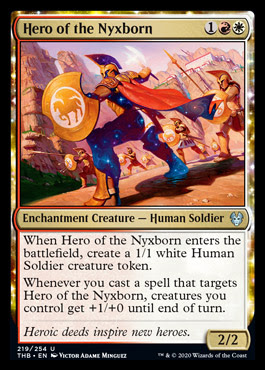 Decent but narrow. Will see play in heroic decks, might see some fringe use in quirky aggro decks with enchantment themes or perhaps just a high number of self targetting spells. Given how much better Pia Nalar is than this card on every front as a baseline this is not a card you will be using otherwise. 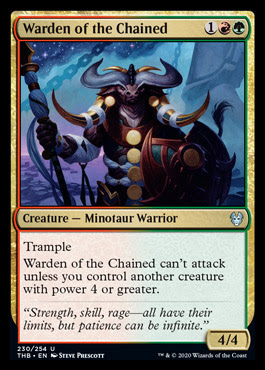 Warden of the Chained 1

Too vanilla, likely wouldn't get much love in cube with the drawback removed! Tribal is really this cards only hope. 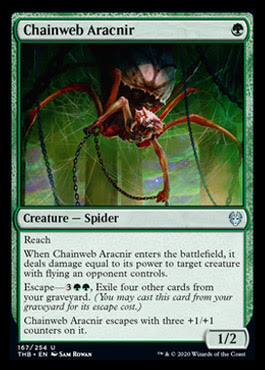 Well this just has tonnes going on. It is cheap, it is big, it is recursive, it is removal. The one mana mode isn't a thing you would play on its own but it is still surprisingly good. It kills loads of thopters and spritis and other troublesome nibblers that are commonplace in cube and then it holds off the rest. It is just a cheap body you can use to empower other synergies too should you wish. Commonly I find my Golgari graveyard decks pack a lot of self sacrifice tools. They also tend to have discard outlets so that you can get your bin based stuff from the hand into the bin. As this holds relatively little power as a card to just play from your hand it works quite nicely as extra discard or sacrifice fuel. Ultimately it does come down to how good a 3GG 4/5 reach and four damage to a flier from the bin is. If you kill a Glorybringer then it is about as good as it gets, if no relevant fliers get killed the value dips a lot. I fear this is a bit too situational on the one hand and a bit too much of a theme card on the other to be a player in most cubes. If you are packing heavy discard and graveyard synergies in a more midrange build then perhaps this fits in. It is suitably versatile that I do plan on giving it a quick test all be it with very little expectation. I can absolutely see myself running this in constructed singleton builds fairly often. 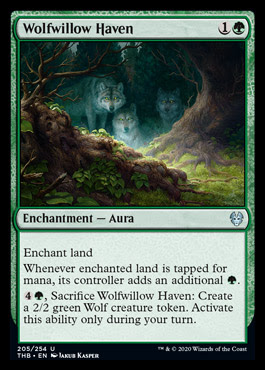 I will certainly play this in lists that focus on untapping lands or on enchantments or perhaps even on devotion. I will not be playing this just as a ramp card. The lategame wolf is garbage. The early game ramp is a little under par. 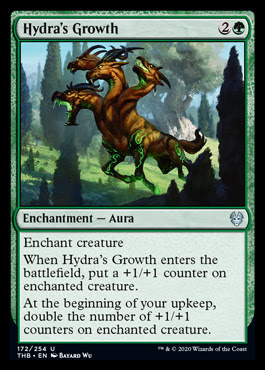 Rather a lot of risk on a bit of a win more card. Sure, we all want to put this on a Walking Ballista and have our wicked way with everything but optimal builds will not include this fun card.