The Value of a Card 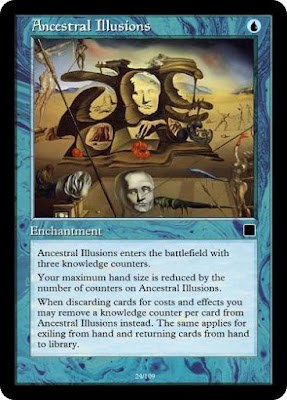 I started this exercise in an attempt to demonstrate the difference in value between token and non-token creatures but it failed to really help with that problem as I had hoped. All the exercise really did is further prove to me that the value of a card is entirely based on context. While I cannot easily put a value on a card I can perhaps at least convince you that part of the value of drawing a card has absolutely nothing to do with what that card is or does. I was going to use near blank cards like Darksteel Relic or Spellbook as my example of a blank card but the issue there is that you can have all sorts of uses and synergies for those things and that all rather muddies the waters. Instead I designed this card which is simply a reworking of Ancestral Recall such that it only draws effectively dead cards. It is not quite perfect in that it doesn't trigger actual drawing effects and wouldn't trigger an opposing Consecrated Sphinx. I am sure I could add wording to allow for such things but the card is already on the wordy side. The point is that this card is clearly pretty good and would likely see play in a lot of formats. If all this does is draw you dead cards in hand and yet still seems good then it is clear that cards in hand is a valuable resource, regardless of what they do or do not do themselves. Almost like how life points all do nothing for you barring the last one. Ancestral Illusions doesn't even help with things like Ivory Tower triggers or provide a great pool of unknowns for your opponent as three actually dead cards in hand would do. Mostly what this does is turn your loot effects into draw effects for a bit. It lets you power up your Collective Brutality. It is not even useless when you don't have effects that work with discarding cards from hand as it protects against things like Blightning.

Now, you wouldn't play this card without synergies to go with it. Unless your list is full of Faithless Looting, Vryn's Prodigy and Brainstorm this doesn't seem worth it. Much like how Treasure Cruise stops being worth playing when you slowly and unreliably fill up your graveyard. So what does this tell us? It can be used as a measure for potential scaling in your deck. If Ancestral Illusions is a card you would play in your deck then you can say that your deck scales well with cards. A better way of thinking about this is perhaps to say that it scales well with dead cards as that communicates better how to use it to your advantage. If your deck is good with dead cards this means you can play more situational cards if you want because the cost of having them is less detrimental. The same is true for expensive cards, you can get away with being a little more top heavy as you have ways to make use of those card when you can't simply cast them. Coming at it from the other direction your list will also benefit more from raw draw effects and perhaps less from other value generators than average.

Returning to the original aim of this article, the main thing worse about a token creature when compared to a non-token one of the same shape and size is simply that it ceases to be a card when dealt with. As such it cannot be discarded from hand or delved out of the bin, it is simply no longer a resource you can exploit. I always state that it is bounce and flicker effects that make tokens bad compared to real creatures but this is only really a small part of it. If they are wasting a bounce or flicker on a 1/1 token you are probably OK with that. The value of bounce is in the tempo, not being able to replay the token that got bounced is not the relevant part of the bounce, it is the tempo that was gained and lost by that body not being in play at that time. Bigger and better tokens certainly scale up worse than cards of the same shape and size for this reason but on the small end of the spectrum the not being an actual card is the larger share of why the token is less valuable.
Posted by Nick Nobody at 04:40