I don't recall a PT top 8 with more than 28 copies of a single card in main decks although some GPs have that acclaim. As far as I can find 28 is the top for a PT and previously this was held by Rishadan Port, which being a colourless land, I feel is rather less impressive that it is for a triple red card. Feels like there must be some others out there but I checked on some of the ones I recalled as heavy hitters and found nothing. Wolfir Silverheart only hit 20 copies. Stoneforge Mystic was around that at 22 copies in the famed Paris cawblade PT although there was a singleton, a pair, and a triple inclusions meaning ultimately seven people still had the card main. Even Smugglers Copter was only around the 16 mark. I feel like there was an Aether Hub PT where, if not the full 32 copies, it did make all the lists, but I cannot find it if there was. Seven out of eight decks all with four copies is pretty nuts for a card. It merits attention, a more scrupulous eye, if nothing else.

From a design perspective the card is not great but it is not due to excess power. Certainly the card is potent but it is more to do with how brutally polar it is. Firstly, you have to be nearly mono red to unlock the power of this card which is a narrowing effect on a format which isn't great. Secondly it utterly hoses one toughness dorks which warps a metagame around it. I think it probably should be banned in standard due to how heavily it determines what is viable in the meta but it is not upto me nor will it effect me, so moving on. 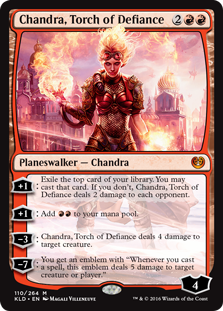 While the card is oppressive in standard that is more to do with the strong supporting cards for Chainwhirler. If it was not for them then Whirler decks would not be so prevalent and in turn the format wouldn't be so warped around the Whirler and one toughness dorks would be playable again! It is the obscene power of Rekindling Phoenix, Chandra and Glorybringer that are really to blame for how oppressive Chainwhirler is. Whirler is the four of card however because of where it is on the curve, if somehow you could flip it with one of those for or five drops (while still keeping function and power level the same) then you would find four of copies of those cards and reduced numbers of the Whirler. A 1RR 3/2 Rekindling Phoenix sounds exceptional!

Another thing propping up Whirler in constructed is that is does two jobs yet remains relevant and powerful enough when it just does the one job. A 3 mana 3/3 first strike that pings face when it comes in is fine. That when it kills anything is great and when it kills more than one thing, even if some of them are tokens, it is just oppressive. While Whirler is still nuts in cube when it kills things it is rather less exciting as a 3/3 first strike. Overall the card is still perfectly playable in cube but it is a far cry from the card it is in standard. I was not super hot on the card in my reviews and still feel I was fairly on the money with where it sits. Power level it is comparable to Rampaging Ferocidon however the playability of the Whirler is substantially lower. Colour intense costs are a big downer for cube cards. White and red are the two best and most popular mono colour decks and so Benalish Marshal and Chainwhirler always had the best shot in the cube of that cycle. I was more keen for Marshal in my reviews as it is more on theme with what mono white cube decks need to do combined with the fact that white already supports the triple white three drop Spectral Procession. Red is already the hard counter to one toughness creatures and didn't need any help with the matter. Red is full of value ping effects but that isn't a theme or synergy, it is something that has diminishing returns. If you have Chainwhirler in your deck it reduces the value of your Lava Dart a tiny fraction. You only need one Forked Bolt to beat the Savannah Lion deck hard and with those cards and effects being weak against a number of other cube archetypes you do not want to over load on them. Just enough to beat the weenie decks while not so much as to gimp your punch against the bigger decks. In standard Whirler is just a good card that provides ping for free. In cube it is an OK card that performs the ping role and should take up a deck slot as a performer of that role in the place of a similar such card. 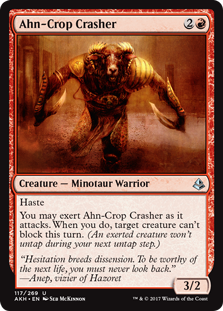 Magic is a game of scaling and the more things you have scaling together the more pronounced the overall effect is. Whirler scales the wrong way on three accounts as you move from standard to cube. The triple red cost gets more limiting. A 3/3 first strike for 3 gets less useful. Good ping is in increasingly good supply. These together are enough to turn a ban worthy card that is dominating standard in an oppressive way into marginal cube card. Cards like this are harder to spot when under performing in cubes. Absolutely it will still win games and offer huge swings and this will lead to some confirmation bias. It is great in standard and it just won me this cube game therefore it must be bomb disregarding context. When you can't cast it you will blame your lands and draw, when you cast it and it doesn't kill anything it isn't a dead card or a do nothing and so it won't seem bad in a note worthy way. You likely won't consider how much worse it made your Esper control deck just because of the random space in a pack it took up in the draft. Sure, you might argue that it would just be another equally irrelevant red dork but imagine it was an Ahn Crop Crasher instead which I grant is a weaker card. The point is that if that was the card the in the draft in place of the Whirler then a Boros aggro player might pick it up because they can play it. They might then leave a relevant white card in the pack for you to grab for your Esper control deck. Perhaps you are super lucky and get a Thraben Inspector, or perhaps you are light on cheap spot removal and that Oust plugs the gap nicely.

I like a new card so I will absolutely be running Whirler in my for a good amount of time. It is however a card I ultimately expect to cut in favour of cards that are more broadly playable. Just because my cube supports a couple of mono red builds doesn't mean it is good to include cards exclusive to those decks, it just means it isn't as bad as it could be! Being such a polar card also means I will likely cut it ahead of time. I like cards that are well designed and lead to better games of magic and that is not what Whirler really is. I feel like the main reason I am compelled to write this article is to warn people off feeling obliged to run cards like these in their cubes. The card has so much noise and hype from the community and it is backed up by tournament results that it will start turning up in cubes regardless of merit. I think the card is close enough that it will very much depend from cube to cube how viable and worthy the card is. Even when unworthy it won't always seem that way and will always have that ability to dominate a game. There is no doubt this card is cube worthy on power but the more I play cube the more I want a good format and good games. With that in mind I expect Chainwhirler to deliver less. By all means, run this card if you want to, but know why you are running it and don't do it just because you feel obliged to!
Posted by Nick Nobody at 09:50