This list is a brew trying to highlight the power of a couple of the more niche Battlebond cards. Bonus Round is immensely powerful and allows for some disgusting plays. It is to storm style combo decks as Insult is to burn decks. The other new card well suited to this kind of deck is Sentinel Tower which proves to be a very potent win condition. Now, the list below is mono red because that is harder to do and much cooler. If you want the most powerful version of this deck then you cull a bunch of the more exotic cards and you play black spells in their place. Dark and Cabal Ritual, Yawgmoth's Will, Tendrils of Agony and probably some Demonic Tutor, Night's Whisper and Duress technology as well. That is the most powerful build of the deck but this version is less demanding on high value cards and gets to play with some really cool ones that you otherwise rarely see. The way the deck turned out is not far off a cross between my Pyromancer's Goggles deck and my friends Big Ritual Red deck which I recently did an article on. While I suspect my friends build is the most powerful of the three this one is a lot better than the last Goggles deck and a lot more fun than both of them. Conceptually the deck is pretty simple, it is all the red dig and (very nearly) all the red burst mana effects garnished with a pair of ways to win and basically nothing else! 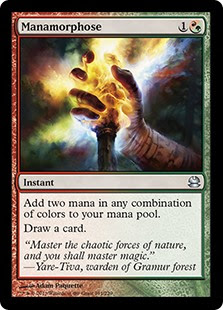 The potency of the deck arises from the potency of Forking what is in the deck! A Forked Ritual is more than double the returns which makes it rather easier to go off out of nowhere in a powerful way. More excitingly most of the red dig effects require the discard as part of the cost of the spell and thus turn into mentally good draw spells when Forked. It is surprisingly easy to Fireball someone for 20 with this list off the back of a half decent Bonus Round. You don't need much in hand to go off and play your whole deck. All the dig spells suddenly go four deep and most now provide card advantage while the rituals provide more than enough mana to carry on going through the deck with enough left over for that fatal X spell at the end. It may sound like a tall order to win with a single X spell but Bonus Round into Seething Song is 10 mana which will do 18 when sunk into said X spell. Usually you will do rather more than that too!

My first version of this built lent on Empty the Warrens as it's backup win condition but Sentinel Tower proved so effective I cut the creature element and tried to up the instant and sorcery count. I had a cute little goblin support crew incluing the new ramping Cheering Fanatic, the Warrens empowering Bushwhacker, Wily Goblin for some free defense with my early setup plays and a lovely Skirk Prospector allowing all those things to become mana! While a nice synergic package they didn't have great synergy with the Past in Flames and perhaps don't suit this exact list. I also had Vessel of Volatility in my first go at this deck but found it lacking for exactly the same reasons. This list just wants instants and sorceries where possible. 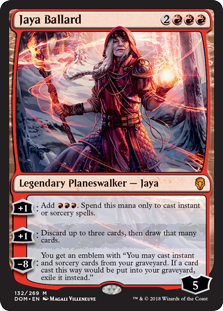 I also started out with loads of planeswalkers. Jaya Ballard, Koth of the Hammer and Chandra, Torch of Defiance. While the mana, utility and value of these walkers is great in goldfishing they need at least 2 activations to merit their inclusion. In a deck with no real defenses you don't get more than one useful activation unless you are lucky. Koth limits your use of exotic lands and has low utility. Chandra is too much of an all round card and doesn't excel in the way the others do in this kind of list. Jaya is great for the deck offering both looting and bonus mana and would be the walker I would replace Daretti with (I think one is the most you want ). Daretti being cheaper and gaining loyalty quicker is rather safer but the main reason he is included is that he is the only way I have to recur the Sentinel Tower. I could run lands to recur it but they are not efficient lands. I even considered running something like Elixir of Immortality so as to be able to go through the deck again. It is very possible to burn through all your win conditions with this list! I can use Daretti to power out Goggles as well which is surprisingly powerful. 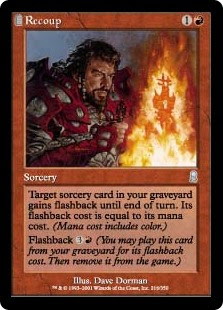 Dualcaster Mage, Increasing Vengeance and Chandra, the Firebrand offer some fork redundancy. These are great for some value plays with Tormenting Voice cards in the mid game they are too much mana to use and only offer limited Forks meaning they don't assist much in going off. I think I would need a little bit more incentive to run any of these. I like the idea of casting Increasing Vengeance from the graveyard for little to no mana but that is cute rather than actual incentive. Too many things need to align for that to afford much value and is likely overkill when it does! Past in Flames does this but so does Mizzik's Mastery and Recoup both of which I looked at and the latter of which I tried. Mostly this was due to my inclusion of Empty the Warrens which I wanted tools to get back. With Devil's Play having built in recursion and Daretti getting the Tower back I felt I was clear to drop the Recoup. Cool though it is it doesn't offer enough power or a wide enough range of uses. Really, the only time you want it in this list is when you need to play Wheel of Fortune but it is in your bin along with your Past in Flames and you can't afford to waste it. Recoup also feels like it makes the Gamble safer. I like the card and I want it in the deck and while I think it doesn't hurt you when you draw it (as is the case with most weak inclusions in decks) I think it does hurt you in the space it takes up in your deck.  Mizzik's Mastery isn't quite right for this list either as it doesn't work with the X spells I hope to win the game with. If there was a bigger Lava Axe style of card then perhaps that would be a good direction to take the deck in. 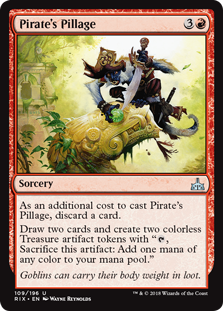 Really what this list wants is another Tormenting Voice and another couple of Rituals. The Lotus Petal and Spirit Guide are really quite weak in the deck and have very little synergy indeed. It feels like you need them but this list isn't very refined so perhaps with some fine tuning you could find a way to do away with some of the weaker filler. I would love Mox Diamond or even Opal but while these are much more potent mana sources than Petal etc you need to warp your build around them and I didn't find a way to do so.

One of the surprise standout cards in the list is Pirate's Pillage. Turns out it is exactly what you want to do pretty much all the time. Forked and cost reduced you generate mana and draw cards. Three mana and two cards turns into four mana and four cards! Being able to carry that mana into the following turns also makes Pillage one of your best possible setup plays. Turn 1 or 2 make a Medallion or Helm, follow it with Pillage and win the turn after.

This deck is a lot more fun to play against than the storm style decks using more or different colours. It is a lot more fun to build and play than most other red decks too and I love a red deck! It has dangerously low levels of interaction and may well need some better cards and tools so as to be able to include some without losing viability. This list can't beat a lot of things but it can also win on the first turn so swings and roundabouts! A word of warning, Bonus Round effects everyone. I lost to a Fireblast for 8 I was not expecting...