I was recently asked why Kitesail Freebooter and not Mesmeric Fiend, or for that matter, Brain Maggot. This is a good question. You look at a card like this an obviously it is all about the discard. You would class these kinds of cards as hand disruption and not as creatures, well certainly not as threats at least! Intuitively then reducing the effectiveness of the hand disruption to offer some limp buffs to a very limp body sounds like a terrible trade off. Most of the time this is a sensible kind of logic to use for assessing things like this. You don't however want to rely on assessment tricks like that alone to evaluate a card, it helps to consider as much about it as possible. You can fall into traps if you make an assumption about something without exploring it fully. To do this I asked myself questions like what the role of a Mesmeric Fiend actually was, where you would use it and what it would typically do for you? I wanted to understand more deeply the cost of reduced utility on the discard.

In my experience you play Mesmeric Fiend in one of two situations. Either you need more hand disruption effects and you don't have enough actual good cards like Thoughtsieze in your pool to use in which case you are just running a bad card to plug a hole. The other case is where you want hand disruption effects and you have a lot of cards that have synergy with the creature card type. When you can tutor up dorks, recur them from the bin, turn them into cards or Overrun with them for the win etc your discard dorks gain a lot of utility. In the former case you would much rather your Mesmeric Fiend was an enchantment instead of a creature like Journey to Nowhere verses Banisher Priest. The 1/1 body gets very little done and means your disruption is short lived. 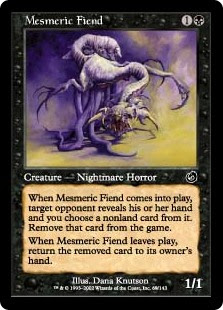 Due to the nature of these cards you typically aim for removal with them. If you don't then they just kill your dork, get their card back and carry on as if not much had happened. When you are not taking removal you are taking disruption effects like counter magic so as to force through important things of your own. Sometimes you are just disrupting combo pieces and buying yourself some time. In the majority of cases, when presented with a hand of cards the correct choice will be a non-creature spell. Some decks have such an abundance of removal effects that you have no expectation of getting a two for one with your card nor indeed that much in the way of disruption. When you flop down your Mesmeric Fiend on turn two and see Arc Trail and Lava Dart or a pair of Wraths then the most significant aspect of what you have done is gained information. I think information is generally undervalued by magic players. It is certainly the hardest resource to convert into real value. When you go one for one with your Fiend but you gain useful information I generally consider that to be a win.

Often you will also feel like you are trading down too but the reality is often in your favour. If they Wrath your Fiend and a mana dork it feels like you ate a two for one. When they Lava Dart your Fiend it feels like you paid twice as much mana and they still have half a card. These might feel like bad deals but they probably are not. A Wrath that hits a Fiend and an Elf is terrible, they have used a key tool to handle two things that are not really threats. In the game of matching up answers to threats accordingly, as the control player needs to do, they are losing. Even the Lava Dart can be to your advantage if it meant they didn't get to do their optimal play that turn which might have been making a threat or it might have been using the Arc Trail. Both these situations I described sound like you got two for oned however I would argue it as much more like a 1 for 1 trade. You gained valuable information and perhaps a tiny bit of disruption from forcing sub par plays. Having information alone will often bait out the sub par plays. If you know they have something easy enough to play around they will often take the low value payouts on that card. All this is to say that while not hitting creatures is a downgrade it is not a major one. The card still does what you want it to do in disruption and information gathering. It has exactly the same performance in the discard as Fiend when Fiend is good. 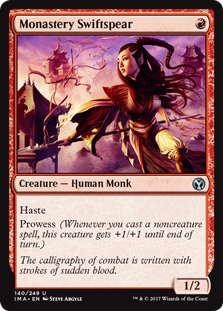 Even a minor downgrade is still a downgrade. This means that flying and an extra toughness have to do quite a lot of work to make the card good. I was trying to think of examples of cards that differ by exactly +0/+1 and flying and came up with Monastery Swiftspear and Stormchaser Mage. Both of these are great cards. Swiftspear is the better card but due to being a one drop and for being mono, not to do with actual power level. Both cards are very impressive when played. These prowess cards are very different sorts of cards to the hand disruption dorks and so those buffs will scale a bit differently. The point is more that you are totally happy paying a whole extra mana for the +0/+1 and flying on Stormchaser, it feels like a good deal. If we were to ignore the scaling differences and say that they are of equivalent value to a Mesmeric Fiend or a Swiftspear then we can do some magic algebra kind of rearranging the equation. Instead of adding the flying and toughness to the Fiend and removing its ability to take creatures from hands we simply remove its ability to hit creatures and reduce its mana cost by a blue mana. Not having blue in the cost I guess we just reduce the cost to a black. Anyway, this one mana 1/1 fleeting Duress sounds really good to me. Sounds a lot more useful than a Mesmeric Fiend. This is another one of those card evaluation tricks. It isn't proof a card is good because I made the assumption that +0/+1 and flying had the same value on any creature which they don't. It is just a good way to check out if a change seems like a good deal mana wise or a bad one and here it seems like a good one. That is of course assuming we can argue a case for the value of the buffs on this kind of card.

So, this all comes down to how good is a 1/2 flier compared to a 1/1? Turns out the answer is massively so. A 1/2 flier is relevant throughout the game while a 1/1 is pretty irrelevant from start to finish. While the prowess guys gain more from flying and toughness than the Fiend in theory the relative change is more significant for the black dorks. Swiftspear is good to begin with, it didn't need the buffs to become a relevant body. Fiend on the other hand is a liability as a dork half the time! It is only ever good as a body when combined with other cards. The 1/2 flier is frequently relevant and so going from a liability to a useful thing is a much bigger swing than going from a good body to another iteration of good body. I feel as if I am going to do a bad job of fully explaining why a 1/2 flier is so much more gas than a 1/1, each example will sound very underwhelming in isolation. The point is more how many different things you can use just this cards body for. Another factor is that increasingly small differences in the early game equating to big ones later on. Freebooter can safely block creatures with one power. This can stave off a bunch of early game chip damage that would otherwise have made the late game uncomfortable. More critically it can handle fliers as well of which many come in 1/1 form. Holding off a Lingering Souls with a humble Freebooter feels great. Forcing them to chump attack in at a planeswalker in desperation is even better! Planeswalkers are a huge part of Freebooters potency in cube. Cheap flying blockers make deploying your own planeswalker vastly safer and having flying attackers in play greatly reduces your opponents ability to usefully get them down. Planeswalkers are a big part of why a couple of damage difference in the early game can make a huge difference late game. Just having that one point of damage in the air might not directly kill a planeswalker but it will reduce the good options it has on how it can use abilities. Equipment are another thing fliers love. Small creatures on the ground carry equipment fine enough but they are usually killed off in combat and force reequip costs and generally eat away at your tempo. Slap something on a flier and jobs a good'un. Small fliers are great for raid triggers too! Offensively the card will do a lot of work too, it is one of those hidden Lava Axe style cards. While lacking any burst potential the card seems to just chip away and before you know it you can start threatening lethal swings. Freebooter is able to act offensively or defensively as the game requires and is surprisingly effective at both.

Mesmeric Fiend was only useful as a creature specifically in combination with other creature synergy cards while Freebooter is pretty useful as body in its own right. It still has all the potential creature synergies and indeed scales much better than Fiend with most of them. Fiend was either a good support card or a bad substitute card. Freebooter is a great support card and a solid substitute. Freebooter has a little bit of the Collective Brutality about it. Both are a lot worse at hand disruption than a Duress but both are great, often better alternatives to it due to the extra options, synergies and utility they bring to your deck. I have found that cards which are able to affect the board while also disrupting plays from hand in some way simultaneously have become increasingly strong in cube. They let you take the reins of the game and dictate a lot of what goes on. Subtle and surprising cards like Mausoleum Wanderer and Judges Familiar as well as more established names including both Thalias and Vendilion Clique. Certainly good company for Freebooter to keep!
Posted by Nick Nobody at 08:19